In month or so virus likely to ebb across U.S., Fauci says 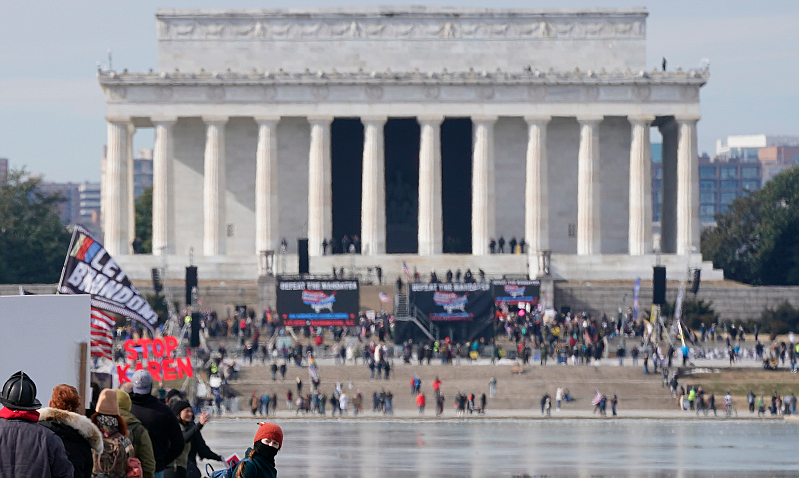 Dr. Anthony Fauci sounded cautiously optimistic Sunday that the omicron wave was peaking nationally in the United States and that coronavirus cases could fall to manageable levels in the coming months.

"What we would hope," Fauci, President Joe Biden's top medical adviser for covid-19, said during an appearance on ABC's "This Week," "is that, as we get into the next weeks to month or so, we'll see throughout the entire country the level of infection get to below what I call that area of control."

That did not mean eradicating the virus, Fauci said. Infections will continue. "They're there, but they don't disrupt society," he said. "That's the best-case scenario."

Similar to rapid rises and then declines in omicron cases in South Africa and Britain, new cases in the U.S. are now dropping in the Northeast and upper Midwest.

[Video not showing up above? Click here to watch » arkansasonline.com/124fauciabc/]

"There are still some states in the Southern states and Western states that continue to go up," Fauci said, "but if the pattern follows the trend that we're seeing in other places such as the Northeast, I believe that you will start to see a turnaround throughout the entire country."

As of Saturday, an average of more than 705,700 new cases were being identified every day, an increase of 8% over the past two weeks, according to a New York Times database. Hospitalizations nationwide are averaging 159,500 each day, a record and an increase of about 25%. Average new deaths are now 2,152 a day, up 41%.

"There may be a bit more pain and suffering with hospitalizations in those areas of the country that have not been fully vaccinated or have not gotten boosted," Fauci said.

Hospitals in several parts of the country are straining to keep up after multiple surges and staffing shortages, including in Mississippi, where nearly all of the state's acute-care hospitals have been pushed to capacity.

Still, he advised remaining ready for the possibility of what he called "the worst-case scenario."

"I'm not saying it's going to happen, but we have to be prepared," he said, describing that situation as "we get yet again another variant that has characteristics that would be problematic, like a high degree of transmissibility or a high degree of virulence."

But overall, he said, "things are looking good. We don't want to get overconfident, but they look like they're going in the right direction right now."

Fauci said it was too early to know the durability of protection from the initial round of booster shots or whether fourth shots might be recommended for Americans.

The Centers for Disease Control and Prevention on Friday released studies showing that the vaccines continue to provide robust protection against hospitalization from the omicron variant, even if they no longer ward off infection as effectively.

Nevertheless, national surveys show about 1 in 5 U.S. adults remain unvaccinated. Among children ages 5-11, who became eligible for the shots in November, fewer than 20% are vaccinated.

Americans have started to receive free coronavirus tests from the U.S. government in the mail after the government began accepting orders Tuesday.

The Biden administration said it would send 500 million rapid tests to Americans this month via the U.S. Postal Service after the omicron variant strained access to in-person and at-home tests. Each household is eligible for four free rapid tests and can order them at covidtests.gov.

Marcie Taylor, a marketing consultant in Santa Ana, Calif., said she received her tests Friday after she ordered them Tuesday at the recommendation of her friend who sent her a link to the website. She said the package, which included two boxes with two tests in each, arrived earlier than the tracking website had estimated.

Taylor said her husband and two children, a 16-year-old and a 20-year-old, would make the tests last as long as possible because it amounts to only one test per person.

"If you can order the kit, order it," Taylor said in an interview. "It gives you peace of mind to have it since there is a shortage at drugstores."

Taylor was one of several people who posted on social media after they received the tests at the end of the week.

"That bodes well for how things are going to go," said Steve Hutkins, editor of the "Save the Post Office" blog.

Hutkins said the Postal Service's mission to deliver 500 million tests in a short period of time is a significant task "but totally doable."

To make these deliveries, the Postal Service has had to transform its operations.

Though postal workers usually handle packages that are ready to send, to manage the coronavirus test operation, workers are packing and labeling the test kits for delivery, according to a memo between the Postal Service and the American Postal Workers Union.

The government has also updated 43 existing fulfillment centers across the country to be able to prepare the tests, the memo said.

David Partenheimer, a spokesman for the Postal Service, said in an email that to send out the tests, the agency was also using strategies that had helped it deliver 13.2 billion pieces of mail and packages during the 2021 holiday season.

"These strategies, including additional staffing, an investment in new processing equipment and operational efficiencies, and an expanded facility footprint, mean test kits can get to the Americans who want them in a timely and efficient manner," Partenheimer said.

The operation has not been seamless, however.

Some people who live in apartment buildings said they were unable to place an order on the website when it went live Tuesday.

Jeffrey Zients, the White House's covid-19 response coordinator, said at a news briefing Friday that this problem affected "a very, very small percent of people who live in apartment buildings" that are not registered as multiunit buildings within the Postal Service's database.

To fix this issue, the Postal Service advised people to file service requests online or to contact the agency's help desk at (800) 275-8777.

Zients declined to say how many people had placed orders for the tests but said the White House would provide that data in the next few days. Nearly 70 million people have visited the test website, according to the government's digital analytics.

The Biden administration has said a second batch of 500 million tests would be available in the spring.

Thousands of protesters from across the country -- including some of the biggest names in the anti-vaccination movement -- descended on the nation's capital Sunday for a rally against vaccination mandates.

Almost two years into a pandemic that has killed more than 860,000 Americans, the gathering on the Mall was a jarring spectacle. It involved a crowd of demonstrators, many unmasked, decrying vaccination mandates in the middle of a city that has adopted mask and vaccination mandates to reduce sickness and death from the omicron variant, which has battered D.C. for weeks.

Organizers had estimated that 20,000 people would attend the rally, marching from the Washington Monument to the Lincoln Memorial, according to a permit issued by the National Park Service. A smaller crowd of several thousand actually participated.

Sunday afternoon about 10 men wearing the insignia of the Proud Boys, an extremist group involved in the Jan. 6 attack at the U.S. Capitol, lingered on the Lincoln side of the Reflecting Pool. They briefly engaged in a shouting match with a small group of counterprotesters at the edge of the rally, then walked away.

Police had a visible but not overwhelming presence on the Mall on Sunday, with about 10 mounted officers lining the march route and U.S. Park Police vehicles parked nearby. Officers were also at the Lincoln Memorial, where fences had been erected to prevent people from walking up the steps.

Metro officials said they were investigating a reported assault Saturday night aboard a Red Line train in Washington, D.C. In a Reddit post, the victim reported being attacked for wearing a mask by a man without a face covering.

Sherri L. Ly, a Metro spokeswoman, said the incident was reported to the Metro Transit police through an online harassment Internet portal. It was unclear if the victim is the one who reported the incident.

"Investigators are reaching out to the victim and are investigating," Ly said. Attempts by The Washington Post to reach the victim were not successful.

The march was billed as a protest of mandates, rather than the medicines themselves. But similar rhetoric -- emphasizing individual autonomy rather than untenable scientific ideas -- has long characterized the broader anti-vaccination movement.

Other speakers included physician Robert Malone, a critic of the coronavirus mRNA vaccines; former CBS News correspondent Lara Logan, who in a November appearance on Fox News compared Fauci to the Nazi doctor Josef Mengele; and public employee associations that have formed to protest their employers' vaccination mandates. Those associations have such names as Feds for Medical Freedom and D.C. Firefighters Bodily Autonomy Affirmation Group, also participated.

"The goal is to show a unified front of bringing people together -- vaccinated, unvaccinated, Democrats, Republicans, all together in solidarity," said organizer Matt Tune, an unvaccinated 48-year-old from Chicago.

He said he wants the event "to help change the current narrative ... which is basically saying that we're a bunch of weirdos and freaks who don't care about humanity. And that's not true at all."

Anti-vaccine activist Kevin Jenkins, who is Black, invoked the spirit of Martin Luther King Jr. as he stood on the same site where the civil rights legend delivered his best-known speech.

"The people in this crowd are on the right side of history," Jenkins declared.

An overwhelming body of evidence demonstrates that the coronavirus vaccines are safe and effective for most who receive them. As of October, according to the most recent estimates from the CDC, those who received two doses of the Pfizer-BioNTech or Moderna vaccines and boosters were 40 times less likely to die of the virus than the unvaccinated.

More than 15,000 people joined a Facebook group for the rally, with many saying they would stay overnight and eat in Northern Virginia to avoid the District's vaccination mandate. Some commenters on the group's page have compared vaccination mandates to the Holocaust and urged people not to get tested for the virus.

Aaron Simpson, a spokesman for Meta, the parent company of Facebook, said that because the page is ostensibly opposed to vaccination mandates rather than vaccines it does not violate the platform's policies on covid-19 and vaccine misinformation, which prohibit "content calling to action, advocating, or promoting that others not get the covid-19 vaccine."

However, some individual posts and comments that contain misinformation have been removed, he said.

"Voicing opposition to government mandates is not against Meta's policies," Simpson said. "What we don't allow is content that promotes harmful false claims about the vaccines themselves, and we remove those posts -- including in this group."

Print Headline: In month or so virus likely to ebb across U.S., Fauci says