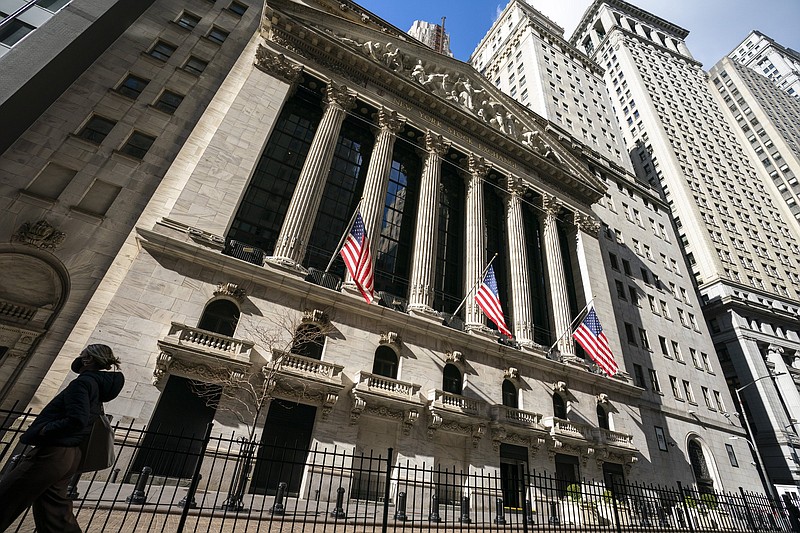 A pedestrian walks past the New York Stock Exchange, Monday, Jan. 24, 2022, in New York. Stocks have fallen sharply so far this year as the market readies for the Federal Reserve to raise interest rates to try to tame inflation, which is at its highest level in nearly four decades. (AP Photo/John Minchillo)

NEW YORK -- A volatile day on Wall Street ended Monday with stocks notching modest gains after climbing back from a steep slide that had knocked more than 1,200 points off the Dow Jones Industrial Average.

The late-afternoon comeback pulled the S&P 500 out of so-called correction territory -- a drop of 10% or more from its recent high.

The market's gyration reflected investors' uncertainty over how aggressive the Federal Reserve's inflation-fighting measures will be and the possibility of conflict between Russia and Ukraine.

"We're in this wait-and-see mode, which is almost the most uncomfortable place to be, so I think the market is really grappling with that," said Lindsey Bell, chief markets and money strategist at Ally Invest.

The S&P 500 ended 0.3% higher after having been down about 4%. The index has come back from a loss that big to notch a gain only three other times in the past. The tech-heavy Nasdaq index rose 0.6% after recovering from a nearly 5% descent.

Early in the day, benchmark stock indexes flirted with near four-month lows as investors anticipated guidance from the Fed later this week about its plans to raise interest rates to tame inflation, which is at its highest level in nearly four decades.

The Fed's short-term rate has been pegged near zero since the pandemic hit the global economy in 2020 and that has fueled borrowing and spending by consumers and businesses.

But rising prices at supermarkets, car lots and gas stations are raising concerns that consumers will pare back spending to limit the pressure on their budgets. Companies have warned that supply-chain problems and higher raw materials costs could crimp their profits.

The Fed has kept downward pressure on longer-term interest rates by buying trillions of dollars worth of government and corporate bonds, but those emergency purchases are scheduled to end in March. Nudging rates higher is intended to help slow economic growth and the rate of inflation.

Now that the Fed is likely to take away that support, investors have been rethinking their expectations for corporate profits and what they are willing to pay for stocks. Economists say higher borrowing costs for houses and cars could slow spending and dampen consumer demand as borrowers direct more of their earnings to paying back debt.

"You're starting to see a shift in psychology," said John Canavan, an analyst at Oxford Economics. The Fed will hold a policy meeting today and Wednesday, and while there probably won't be any significant changes in the central bank's policy, the attention on the meeting "focuses markets on the broader fact that the Fed is prepared to aggressively remove accommodation they hadn't expected just a few months ago," Canavan said.

Investors are also keeping an eye on developments in Ukraine. Tensions soared Monday between Russia and the West over concerns that Moscow is planning to invade Ukraine, with NATO outlining potential troop and ship deployments.

Heightened tension in the region threatens Europe's energy supply, because Russia provides the continent with more than 40% of its natural gas and 25% of its oil. Fears of a disruption come as Europe is already gripped by an energy crunch, with soaring natural gas prices caused by short supplies.

The Stoxx Europe 600 and the Dax in Germany both slid 3.8% on Monday. The two indexes are down about 8% from highs in early January.

Information for this article was contributed by Damian J. Troise, Alex Veiga, Christopher Rugaber, Stan Choe and David McHugh of The Associated Press and by Coral Murphy Marcos of The New York Times.