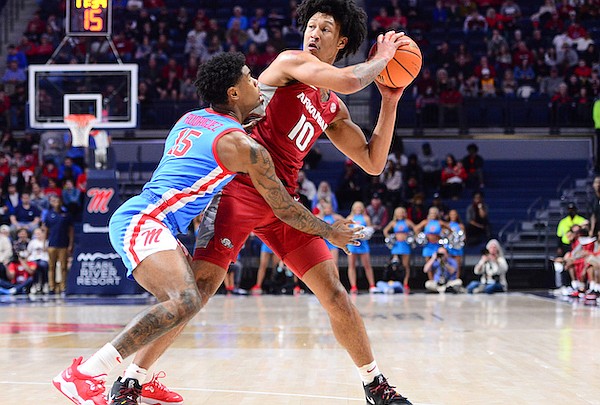 Arkansas extended its winning streak to five games with a 64-55 win at Ole Miss on Wednesday.

The Razorbacks (15-5, 5-3 SEC) have not lost since Jan. 8 at Texas A&M. Their winning streak also includes victories over Missouri, South Carolina and Texas A&M at home, and at LSU.

Only top-ranked Auburn has won more consecutive games (16) in the SEC.

Trey Wade’s three-pointer from the right wing started the run, which also included threes from Jaylin Williams and JD Notae. Williams scored seven of his 18 points during the spurt, which gave the Razorbacks a 56-40 lead with 4:26 remaining.

Ole Miss went 6 minutes, 29 seconds without a made field goal during the run. The Rebels stopped the scoring drought with a pair of Daeshun Ruffin free throws with 4:05 left.

Ole Miss pulled within seven points on Matthew Murrell’s three-pointer with 43 seconds remaining, but the Razorbacks made 6 of 8 free throws in the final 1:23 to put the game away.

Arkansas was 8 of 12 at the free-throw line. All attempts came in the second half.

The Razorbacks trailed only briefly in the first half. Arkansas built a 30-23 halftime lead on three-pointers by Williams and Notae in the final 31 seconds of the half. Notae’s three hit just before the halftime buzzer.

Notae, the SEC’s leading scorer, led the Razorbacks with 25 points on 10-of-23 shooting. Notae was 4 of 10 from three-point range.

Arkansas made 8 of 18 shots from beyond the arc. Wade hit a pair of threes and scored 10 points for the Razorbacks.

Ole Miss (10-10, 2-6) failed to capitalize on momentum from a 16-point home win over Florida two days earlier. The Razorbacks won in Oxford for the third time in four tries.

Arkansas is scheduled to host West Virginia on Saturday at 1 p.m. as part of the Big 12/SEC Challenge.