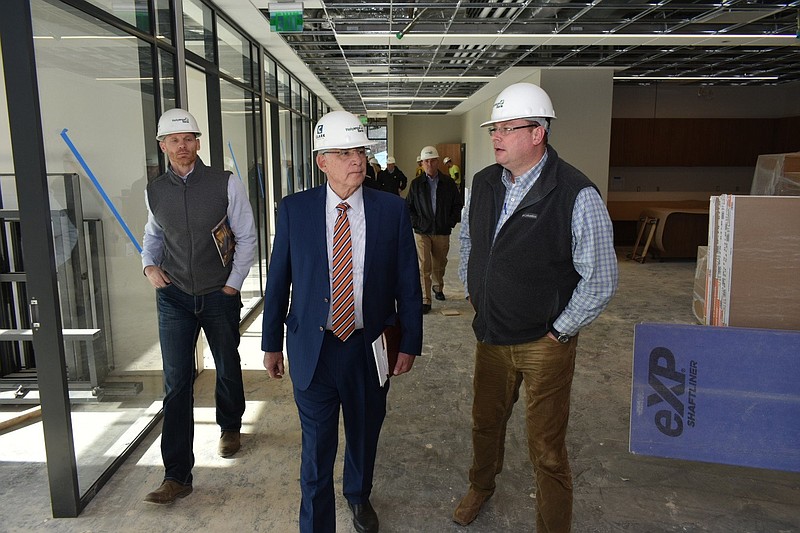 U.S. Sen. John Boozman traveled from the northwest corner of Arkansas, where he held roundtable discussions with business leaders about inflation, high energy costs and other economic hardships, to visit leaders of a Pine Bluff-area bank establishing a new three-story headquarters just off Interstate 530.

Boozman, R-Ark., took up an invitation from Relyance Bank leaders to see their example of forward progress in the southeastern part of the state when he toured the facility under construction on Sheridan Road, across from Colton's steakhouse in White Hall.

"It's so good to see the wonderful things going on in Jefferson County," Boozman said. "I think there's tremendous potential. We're seeing groups like the bank, which has invested substantial sums of money. They're doing that for two reasons -- it's a great location, but I think they also view it as a great business opportunity in the future."

Relyance purchased 7 acres to construct a 40,000-square foot facility that's expected to be finished in the middle of May. Relyance Board President Scott Pittillo, who led the tour, said a 45-day period to install furniture will follow after construction is complete, with move-in scheduled for the Fourth of July weekend.

"We've had some opportunities to go into a few other markets outside of Pine Bluff," Relyance CEO Chuck Morgan said. "Between us and Simmons [Bank], we're very much dedicated to Pine Bluff. But we do have to grow a little bit, and the building that we're presently in, we actually outgrew it about four years ago. It's too many people and too little space."

All departments that work in the current headquarters will be relocated to White Hall, Morgan said.

Morgan also thanked Boozman for helping the bank distribute Paycheck Protection Program loans at the beginning of the pandemic in the spring of 2020.

"We were really blessed by getting the PPP loans to help small and medium-sized businesses sustain themselves throughout the pandemic," Boozman said. "It was a difficult time and still a difficult time for various businesses, so we're committed to help in any way we can."

Relyance is just one of many businesses taking part in White Hall's business boom. Boozman, a co-chair of the Rural Broadband Caucus, said another key ingredient to economic growth in southeast Arkansas is improving internet access in this part of the state.

"There have been all of these terrible things that have happened because of the pandemic," Boozman said. "What we've seen is how important broadband is, whether it's telecommuting -- which you find a lot of people who live in counties like Jefferson County and are working somewhere else -- tele-education and telehealth, very importantly telemedicine.

"We're working really hard to make sure the resources we need are spent. Right now, there's more money in the pipeline than there is the ability to spend it because of the fact that we're moving forward so rapidly."