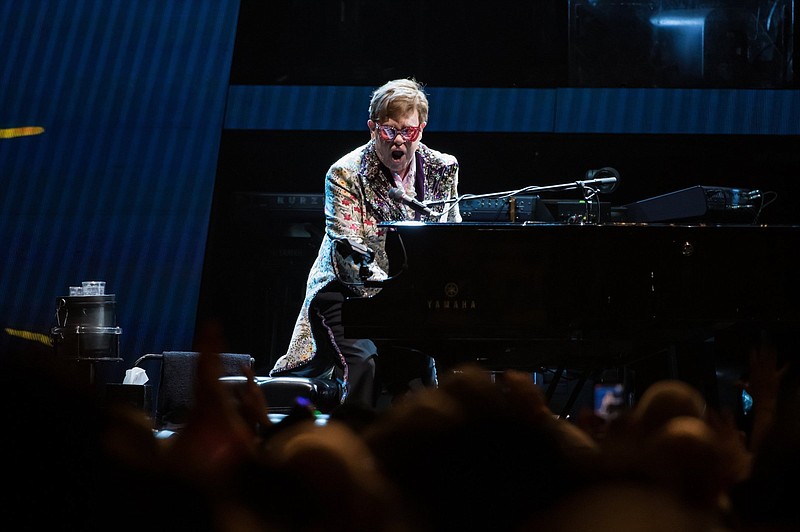 Elton John, performing on the opening night of his "Goodbye Yellow Brick Road" tour. (Special to the Democrat-Gazette/Ben Gibson/Rocket Entertainment)

Elton John finally made it to North Little Rock on Saturday, performing for an adoring, sold-out crowd of 15,482 at Simmons Bank Arena.

The rocker’s “Farewell Yellow Brick Road” tour was originally scheduled to stop here on July 3, 2020, but the first wave of the pandemic scuttled those plans.

And things weren’t looking too good last week, when the 74-year-old rocker, who was fully vaccinated and boosted, tested positive for covid-19 and postponed a pair of shows in Dallas. Reports were that Sir Elton’s symptoms were mild, and though he seemed a bit frail the few times he moved around the stage Saturday night, his voice was in fine form.

Starting with those first stuttering notes of “Bennie and the Jets,” John, along with his six-piece band, worked his way through his extensive catalog of hits and a few surprises during the 22-song set, which lasted a smidgen under 2 1/2 hours.

“Philadelphia Freedom” followed, as the singer, wearing his trademark blinged-out shades and dressed in a bedazzled coat with tails, gave a nod to the song’s inspiration, Billie Jean King.

For “Border Song,” a track from his self-titled 1970 LP, it was just John and his piano as images of heroes like Muhammad Ali, Aretha Franklin (who covered the track in 1972), Little Richard, Jerry Lee Lewis and others played on the massive screen behind the stage.

“Have Mercy on the Criminal” veered into almost full-on gospel, and the venerable “Rocket Man” took flight and had just about everyone in the arena singing along (a common occurrence for most of the show).

“Levon” turned into a funky workout with an extended jam at the end, and then John had the stage to himself again for a touching “Candle in the Wind.”

The singer ducked off stage briefly for a costume change and returned to his piano as a cloud of dry ice covered the stage and the group kicked into “Funeral for A Friend/Love Lies Bleeding,” perhaps the most dramatic stage set of the evening.

The band was feeling the funk again during a revved up “Burn Down the Mission” and turned ’80s pop confection “Sad Songs (Say So Much)” into an almost bluesy romp.

A sea of hands were waving as the crowd sang along to “Don’t Let the Sun Go Down on Me.” The set closed with four absolute bangers — “The Bitch is Back,” “I’m Still Standing,” “Crocodile Rock” and “Saturday’s Night’s Alright (for Fighting).”

John returned in a magenta bathrobe for “Cold Heart,” his duet with Dua Lipa (no, Lipa wasn’t at the show, but her recorded vocals were). He noted that the song, from his “Lockdown Sessions” album, was his current hit single, then introduced his first one, “Your Song,” released in 1970.

John’s band — guitarist Davey Johnstone, drummer Nigel Olsson, bassist Matt Bissonette, keyboardist Kim Bullard, percussionist John Mahone and hyperactive percussionist Ray Cooper — were locked in mightily throughout the set, and the musicians seemed to be having fun together. It was nice to see John smiling with them as he performed.