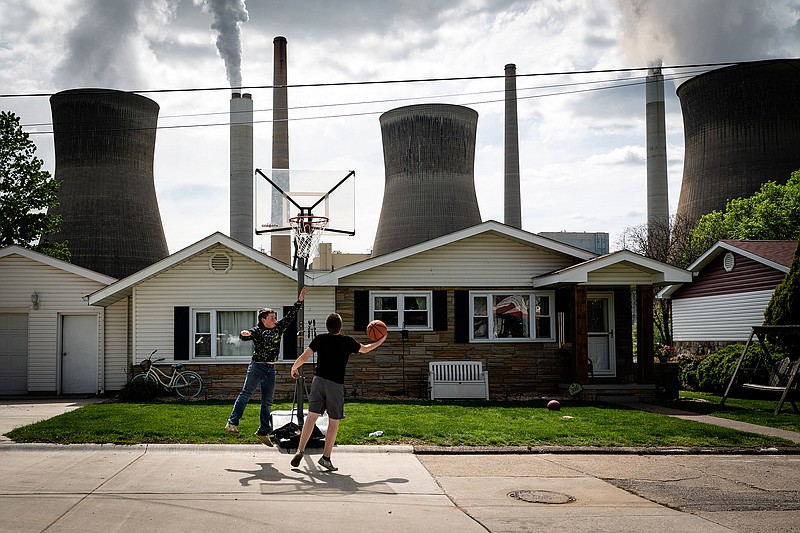 A coal-fired power plant looms over a residential area of Poca, W. Va., on May 6, 2021. Despite the Supreme Court ruling limiting regulatory power over power plants, electric utility companies are already reducing their dependence on coal. (The New York Times/Erin Schaff)

The chief executives of U.S. electric utilities, wary of the perils of climate change, are marching away from coal, as well as other fossil fuels.

Industry experts are watching for whether the shift in the outlook among top electric utility executives will soften the impact of Thursday's U.S. Supreme Court decision declaring that the Environmental Protection Agency had overstepped the authority Congress gave it to limit carbon dioxide emissions at power plants.

In a 6-3 decision, the Supreme Court said it was "highly unlikely" that Congress would leave the amount of coal-based generation to the discretion of the agency. And it said the case fell under a "major questions doctrine" that required "clear congressional authorization."

In the case, West Virginia v. EPA, the court sided with more than a dozen state attorneys general and a pair of mining companies that argued the now-defunct Clean Power Plan, proposed by President Barack Obama, improperly gave the EPA the ability to regulate electric utility emissions. In the dissent, Justice Elena Kagan said the justices' opinions could endanger not only controls on carbon emissions but also a wide range of regulations throughout the government.

The court crimped the Biden administration's options to combat domestic emissions, and the ruling hobbles the agency, chills what regulations federal agencies may propose, and weakens Congress and the executive branch while drawing power into the judiciary, experts said. Still, the EPA has options for addressing climate change.

President Joe Biden said after the ruling he would pursue all legal avenues to forestall climate change and its catastrophic economic and ecological effects.

"We cannot and will not ignore the danger to public health and existential threat the climate crisis poses," Biden said.

Outside the courtroom, reviving the fossil fuel business isn't going to be simple.

"We don't really see that there would be any immediate impact on our transition plans," said Vicky Sullivan, director of climate policy at Duke Energy. "We still plan to transition out of coal by 2035 and we don't see the Supreme Court's decision having a material impact on that."

Last year, Duke Energy burned coal to supply 22% of its power needs, after inching up slightly from 2020 when the pandemic hit. But Duke plans to shrink that share to 5% by 2030 and zero by 2035.

Of Arkansas' five coal-fired electric plants, the Entergy Arkansas-run White Bluff plant near Redfield and Independence plant near Newark are scheduled to close by the end of 2028.

Nationwide, U.S. coal output tumbled 35% from 897 million short tons in 2015 to 578 million short tons in 2021, according to the Energy Information Administration. The Sierra Club's anti-coal campaign claims 357 coal-fired power plants have closed down, with 173 remaining. And the unused Clean Power Plan, which was the center of Thursday's case, was supposed to shrink coal's share of U.S. generation to 27% by 2030; instead it fell to 21.8% by last year, according to the Environmental Integrity Project.

Richard Lazarus, a Harvard University environmental law professor, acknowledged that many companies would not alter plans -- for now. "Yes, coal is going to lose in the marketplace," he said in an email. "The utilities will not build new coal-fired power plants. That is irreversible, and why, even absent the Clean Power Plan, the U.S. met its regulatory objectives eleven years early."

But, he warned, "the question is no longer whether the way we produce energy will be fundamentally transformed, but how quickly that will happen. And, for the climate issue now, the pace of change may well be the ballgame."

Utility trade group Edison Electric Institute, a variety of high-tech and other companies, and the EPA itself appealed to the Supreme Court to let the agency set consistent standards after sifting through the science of climate change and making detailed regulatory choices.

"While it may seem counterintuitive that the Nation's investor-owned electric companies, in particular, should favor EPA regulatory authority, the alternative could be the chaotic world of regulation by injunctive fiat," Crowell & Moring partner Thomas Lorenzen wrote in the amicus brief.

"It creates some uncertainty, and probably the thing that the industry needs the most is regulatory certainty," Pizarro said. He said the court must go beyond specific regulations and reaffirm the Chevron v. Natural Resources Defense Council case, which gave deference to government agencies that possess greater expertise than Congress.

Pizarro said that he has taken issue with how long it takes to get permits in a timely way, but he said that "in the long term, we know we need to decarbonize the economy."

There are some in the mining business who disagree, and they have been bolstered by sharply rising coal and natural gas prices.

"This case is about much more than any single or cumulative impact of the original (now obsolete) rule that got us here -- but is more significantly about the limits of the U.S. Environmental Protection Agency's authority," said Ashley Burke, head of communications at the National Mining Association, in an email.

"The Clean Air Act does not provide the EPA with near unfettered authority to issue rules that fundamentally remake the nation's electricity grids, causing massive electricity reliability and affordability repercussions across our economy," she said.

Westmoreland Coal, which was part of the combined case taken by the Supreme Court, said in its brief that "the fundamental issue" was the EPA's "asserted power to restructure entire industries by setting emission limitations." Westmoreland said it empowered the EPA "to target any category of sources in the Nation -- from refineries to factories to home kitchen ranges -- for reduced utilization in service of the agency's decarbonization objectives."

Burke took aim at EPA Administrator Michael Regan for pushing for speedier retirement of coal plants "at the exact time that the energy crisis, skyrocketing electricity costs, and reliability and blackout concerns are showing that these plants are sorely needed."

Environmental and climate justice advocates from across the United States are decrying the ruling, saying it will be felt most by communities of color and poor communities, which are located near power plants at higher percentages than the national average. They are calling on the EPA to find alternate ways to limit carbon dioxide emissions and other forms of air pollution, and for Congress to grant the agency the authority to do so.

The Supreme Court said the EPA "can't do generation shifting," Thomas Lorenzen, partner at Crowell & Moring and co-chair of the firm's environment and natural resources group, said in an interview, referencing a method the Obama administration pursued to address pollution. "But that's all it says. On everything else, it's got running room," he said. "Given the makeup of this court, this was not necessarily a bad day for EPA."

The court did not prohibit the EPA from regulating carbon emissions. In fact, Chief Justice John Roberts said capping carbon emissions to move the U.S. away from burning coal for electricity "may be sensible for the crisis of the day."

Despite this, advocates said the ruling puts disadvantaged communities at risk of greater harm because of the effects of climate change and air pollution. They also are concerned about the ability of the EPA to enforce other bedrock environmental laws such as the Clean Water Act.

The Supreme Court decision "denies relief to Black and other communities of color as well as poor communities disproportionately exposed to power plant pollution and vulnerable to climate change," Monique Harden, assistant director of law and policy at the Deep South Center for Environmental Justice, told The Associated Press.

Harden's organization has done extensive research on the effects of heavy industry on people living along the Mississippi River Chemical Corridor -- also known to some as Cancer Alley -- a stretch of petrochemical plants and oil refineries.

That corridor touches New Orleans and Baton Rouge, two cities that have experienced intense storm surges and hurricanes over the past 20 years. And Baton Rouge has a power plant, Big Cajun II, with two coal-fired units that's owned by Cleco Power.

Thousands of miles west, the Supreme Court decision was just as alarming to Darryl Molina Sarmiento, executive director of Communities for a Better Environment. She said the ruling is part of a decades-long effort by the fossil fuel industry to strip the EPA of its ability to protect vulnerable communities, including those that live alongside power plants.

"Because the entire western grid is connected, a polluting power plant in Southeast L.A. can be supplying power to wealthy white communities in Utah," she said. The same is true when California imports power from coal-fired power plants in Arizona and the low-income communities of color that surround them there are polluted, she said.

Information for this article was contributed by Steven Mufson of The Washington Post, Drew Costley of The Associated Press and Benjamin J. Hulac of CQ-Roll Call (TNS).