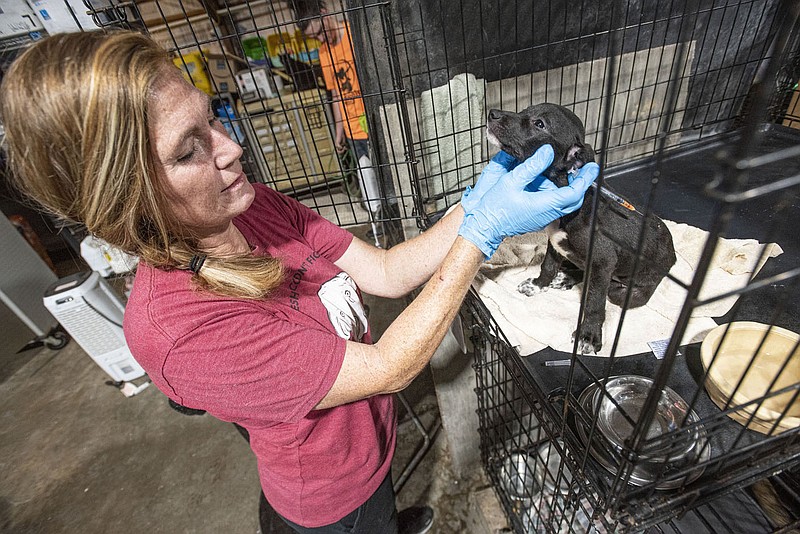 Cindy Scott, director of the Artemis Project, nurtures a puppy named Otto recovering from the canine parvovirus on Friday, July 1, 2022, at the animal rescue shelter in Hackett. Scott said the organization has been dealing with an animal overpopulation problem in the River Valley since it received its nonprofit status in January 2020. Visit nwaonline.com/220703Daily/ for today's photo gallery. (NWA Democrat-Gazette/Hank Layton)

FORT SMITH -- A no-kill animal rescue in the River Valley has offered possible ways to address an animal overpopulation issue in the area.

Cindy Scott, director of the Artemis Project in Sebastian County, said the organization has been full since it received its nonprofit status in January 2020. This occurred following the closing of the Hope Humane Society, a nonprofit animal shelter and pound in Fort Smith, in mid-2019.

Scott said although the Artemis Project's intent is to have every animal it takes in go to a home, it has been forced to house many at its facility south of Hackett due to the "extreme" numbers it's been facing.

"There is an overabundance, and as much as we try to help the situation, until some things change, it's going to continue to be that way because there's only so many animals that we can push out to northern states if we don't start taking responsibility here for the animals in our area," Scott said.

The Artemis Project has 388 animals in its system between those held at its facility and in foster homes, according to Scott on Wednesday. Ashley Bartholomew, a board member for the Artemis Project who also handles fostering and adoptions, said the former is designed to hold about 100 pets and had about 120 as of Thursday. The rescue is using outside pens and indoor kennels to house its overflow.

The organization's efforts to find homes for animals found within driving distance include transporting them to other parts of the country, according to Scott. Most of these animals have been abandoned, including many left at veterinary clinics.

The Artemis Project provides services to cats, dogs and other animals such as pigs and ferrets. This includes urgent medical care, which Scott estimated cost the organization about $45,000 in May.

Scott said she believes stricter local laws regulating things such as the breeding, licensing and spaying and neutering of animals would help alleviate the overpopulation issue, in addition to enforcement of these laws. She believes Fort Smith needs to lead the charge in this regard given it's the largest city in the River Valley area, calling it the Artemis Project's "first line of defense."

"It's harder once you get out in rural areas to control animal population, but if it doesn't start within Fort Smith city limits, then we don't stand a chance," Scott said. "They have to set the pace."

Scott believes the city directors enacting ordinances to successfully address the animal population in the city would free up a significant amount of space for organizations such as the Artemis Project to help animals in rural areas.

Chapter 4 of the Fort Smith Municipal Code lays out the city's rules regarding animals.

Article 7, which was incorporated via an ordinance in August 2019, requires any resident with a dog or cat at or over the age of four months in the city has to get a license for the animal within 60 days of acquiring it. This time limit also applies to new residents with a dog or cat. All dogs and cats must have microchip identification, as well as some form of secondary identification, barring exceptions granted by the city.

Breeder licenses that are valid for one year are available from the city for $500 per dog or cat, in addition to a city-issued business license, the code states.

Scott also advocates for stricter prosecution and accountability against those who commit animal cruelty and neglect, including the hoarding of animals.

Spaying and Neutering and Covid

Scott sees the lack of affordable spay and neutering services for low-income families in the River Valley as another factor in the animal overpopulation there. She said these services for dogs can cost "upwards of $200" at a standard veterinary clinic, with only one clinic in the area -- Kitties & Kanines Veterinary Clinic in Fort Smith -- being an example of a "low-cost" spay and neuter facility.

Scott said this shortage has led to more animals getting pregnant and giving birth to offspring that are also not spayed and neutered. Some of the owners of this offspring give them away in public places like Walmart and abandon them if they are unable to do so.

Bartholomew said this aspect of the issue has been compounded by every veterinary clinic shutting down during the height of the covid-19 pandemic, meaning many appointments for spaying and neutering were canceled.

Bartholomew also said while many people don't oppose getting their pets spayed and neutered, they don't have the means to get their pets to a clinic where they can undergo the procedure, like a vehicle.

"So it would be great to do like a mobile, low-cost spay and neuter, ideally," Bartholomew said.

Such mobile services are available in the northern part of the country and larger cities, according to Bartholomew. The pandemic has also led to the Artemis Project itself receiving more animals from people not financially secure enough to feed or provide medical care to them due to losing their jobs.

The River Valley is also home to Fort Smith Animal Haven. The website for the organization, formerly known as the Kitties and Kanines Shelter, states it provides care for the city's lost and abandoned animals with the intent of reuniting them with their owners or placing them in new homes.

City directors approved extending the city's agreement with the organization through April 2027 at its meeting April 19, according to the meeting minutes. Fort Smith Animal Haven will continue to provide animal shelter services while the city will provide reimbursement payments monthly. The city entered into the original agreement in August 2019.

Crawford County has Almost Home Shelter & Rescue in Van Buren. However, this organization only accepts dogs Van Buren Animal Control brings in due to its agreement with the city, according to its website. 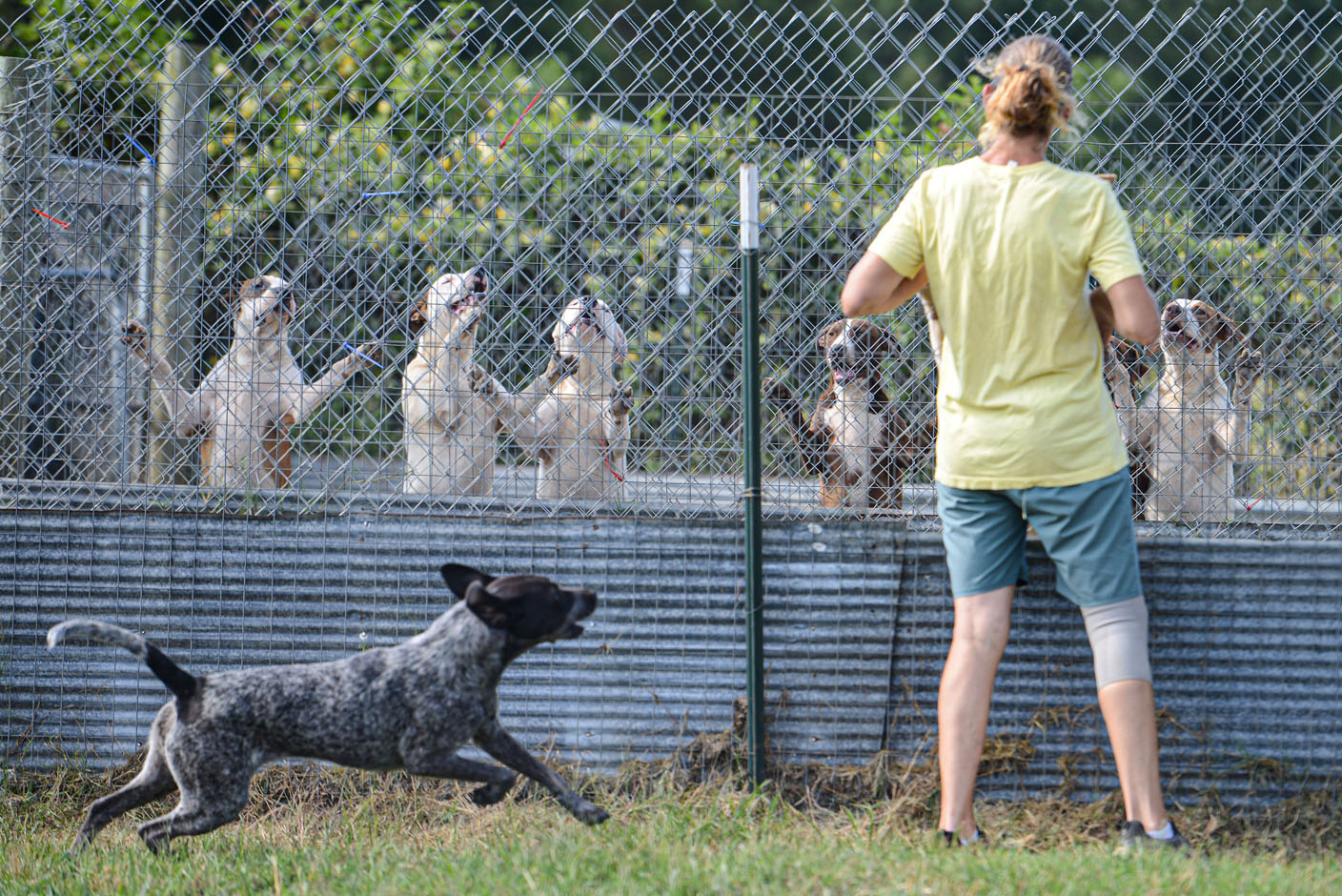 Stephanie Robinson, a volunteer with the Artemis Project, feeds dogs on Friday, July 1, 2022, at the animal rescue shelter in Hackett. Cindy Scott, director of the Artemis Project, said the organization has been dealing with an animal overpopulation problem in the River Valley since it received its nonprofit status in January 2020. Visit nwaonline.com/220703Daily/ for today's photo gallery. (NWA Democrat-Gazette/Hank Layton) 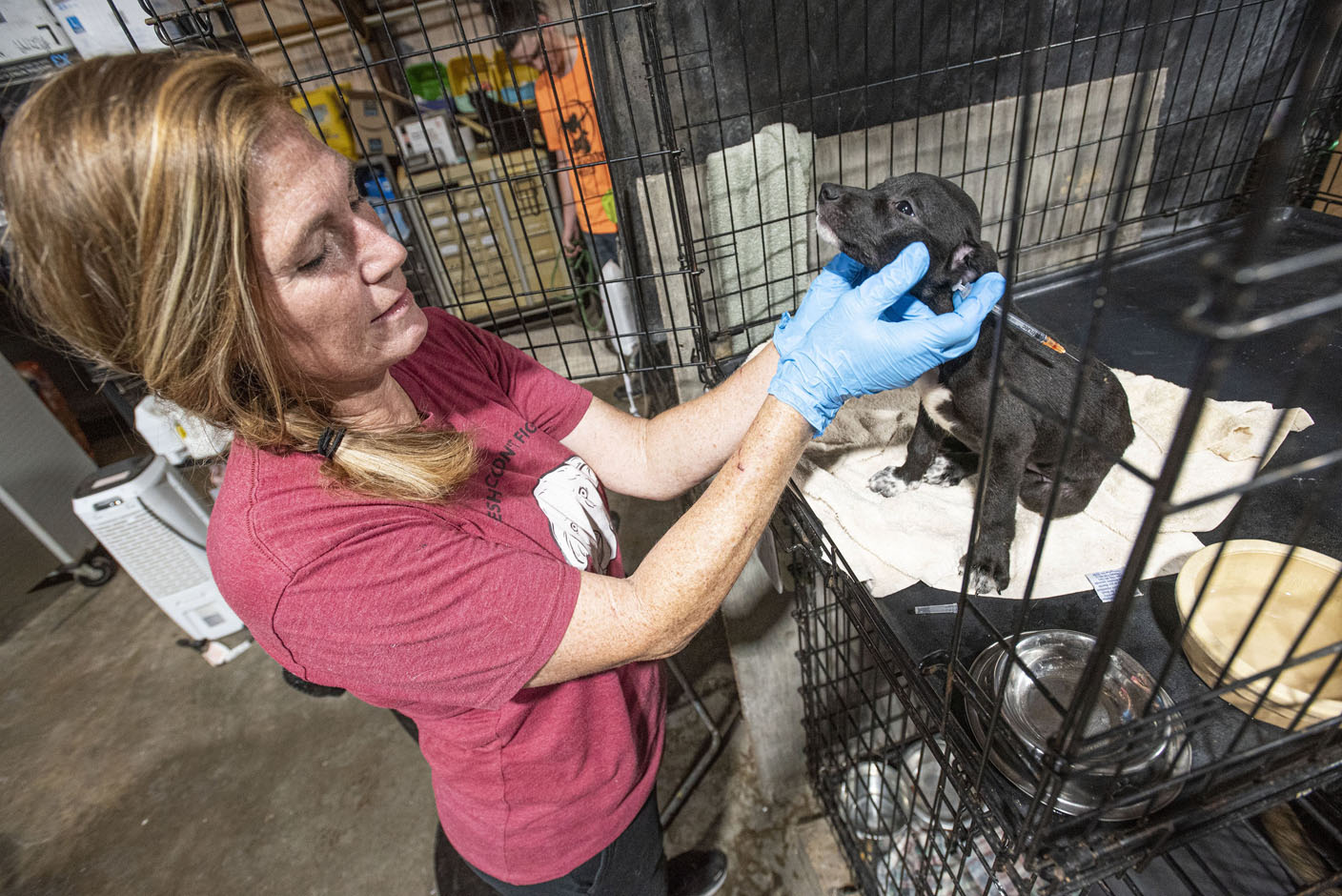 Cindy Scott, director of the Artemis Project, nurtures a puppy named Otto recovering from the canine parvovirus on Friday, July 1, 2022, at the animal rescue shelter in Hackett. Scott said the organization has been dealing with an animal overpopulation problem in the River Valley since it received its nonprofit status in January 2020. Visit nwaonline.com/220703Daily/ for today's photo gallery. (NWA Democrat-Gazette/Hank Layton) 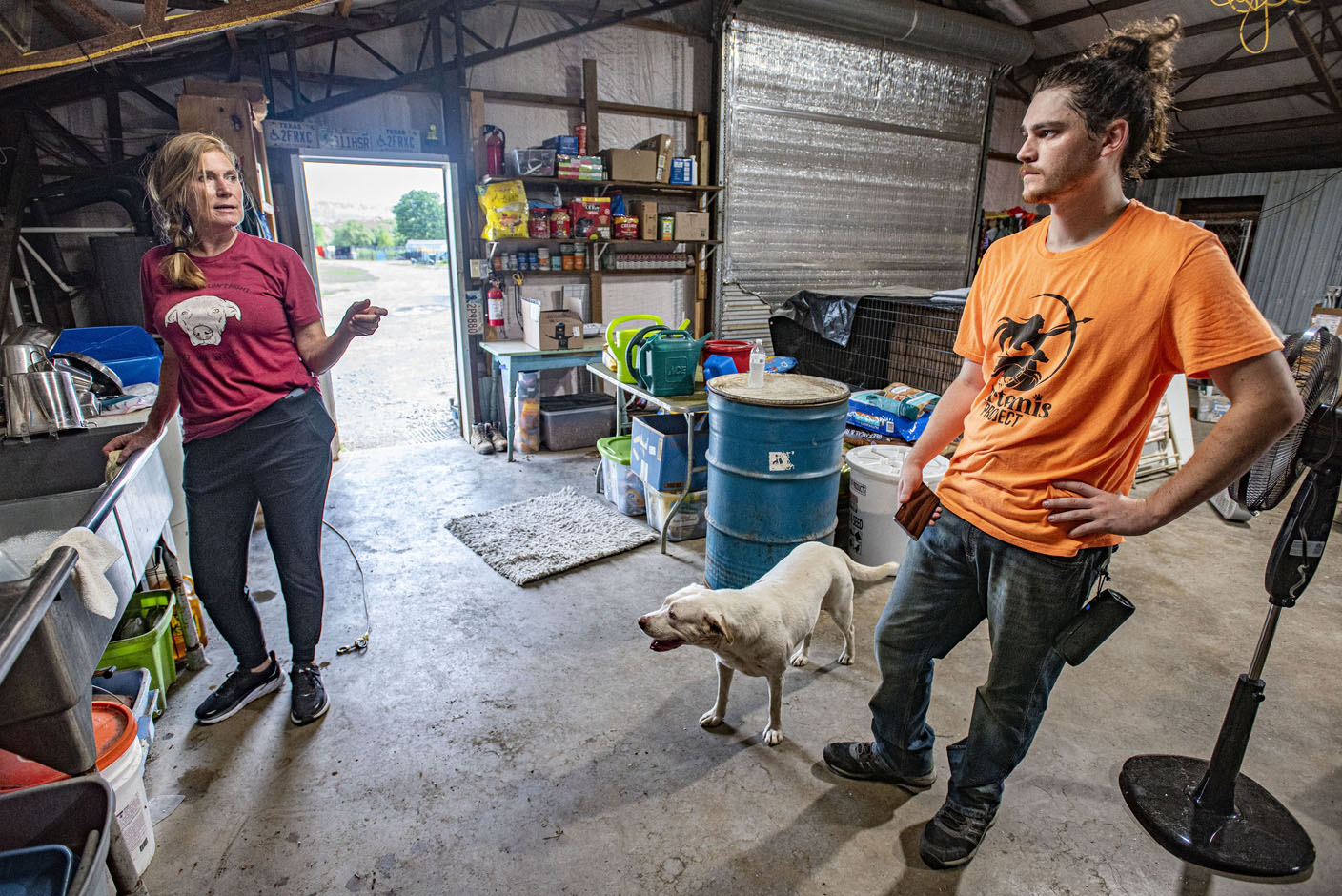 Cindy Scott, director of the Artemis Project, speaks with her son Charlie Scott, who works for the organization, on Friday, July 1, 2022, at the animal rescue shelter in Hackett. Scott said the Artemis Project has been dealing with an animal overpopulation problem in the River Valley since it received its nonprofit status in January 2020. Visit nwaonline.com/220703Daily/ for today's photo gallery. (NWA Democrat-Gazette/Hank Layton)
More News