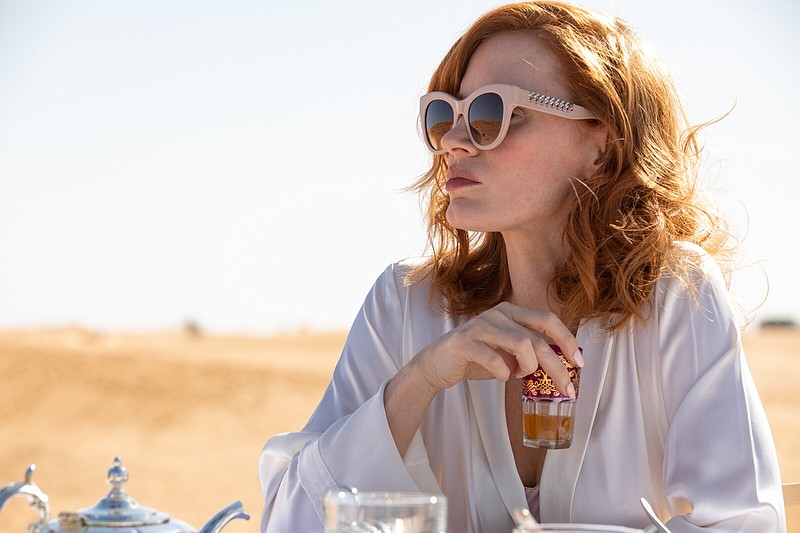 Unhappily married children’s author Jo Henninger (Jessica Chastain) and her wealthy physician husband are caught up in a morally hazardous situation in the aftermath of a traffic wreck in Morocco in John Michael McDonagh’s “The Forgiven.”

Ralph Fiennes and Jessica Chastain make for a captivating duo in John Michael McDonagh's new drama "The Forgiven." McDonagh, the man behind 2014's exceptional "Calvary," has a knack for digging deep into individual human complexity and examining the dark side of human nature. In "Calvary" it was through Brendan Gleeson's troubled Catholic priest. Here, it's a married couple whose relationship has soured beyond repair. McDonagh uses their toxicity and disillusionment as a means to explore a range of themes. Unfortunately the movie never quite gels, and McDonagh's good intentions often feel more patronizing than insightful.

Based on a Lawrence Osborne's 2012 novel of the same name, "The Forgiven" uncoils over a weekend near the High Atlas Mountains of Morocco. It follows the consequences of one lone incident and its ripple effect on the lives of several people from dramatically different walks of life. The premise is promising, especially when you have actors the caliber Fiennes and Chastain. But this sordid morality play never rises above its promise, and it skirts around the edges of its themes rather than deal with them in a meaningful way.

Fiennes and Chastain play David and Jo Henninger. He's a physician fresh off a malpractice suit. She's a children's author who hasn't written a new book in eight years. They're a privileged couple who spend more time sniping at each other than showing any signs of actual affection. Their conversations are littered with condescending put-downs such as him calling her a "harpy" and "shrill" or her mocking him as "highly functioning alcoholic." They are a picture of misery, wrapped up in fake smiles and elegant clothes.

After arriving in Morocco, David and Jo head out on a road-trip to a garish desert villa belonging to their wealthy friend Richard (Matt Smith) and his neurotic partner, Dally (Caleb Landry Jones). Once there the Henningers, along with a few more of Richard's European and American hedonistic chums, are to enjoy a weekend-long bacchanalia of rich people excess.

But on the way, a drunk and distracted David barrels down a dark desert road, not noticing a local teen named Driss (Omar Ghazaoui) who steps out into his path. He runs over the boy, killing him instantly. While it's ultimately an accident, the couple's response speaks volumes. Rather than feel remorse, David and Jo are more annoyed by the inconvenience. They throw the boy's body in the backseat of their car and drive to Richard and Dally's estate. Richard pays off the local police and they start the party as if nothing had happened.

But the next morning they're surprised when a jeep carrying three Moroccan Berbers come to retrieve the body, one being the boy's father, Abdellah (Ismael Kanater). The father's lone request is that David accompany him to his village deep in the desert for the boy's burial. It's their custom, or so we're told. Seeing no other way out, a worn-down David reluctantly agrees. He loads up with the three men and is driven off into the night to whatever fate awaits him. It's one of the film's better moments and it injects the story with some much-needed suspense.

Jo stays behind as Richard nonchalantly cranks his party back up. Rather than worry about her husband, the guilt-free Jo lets her hair down. She guzzles alcohol, snorts coke, and openly flirts with one of the other guests, a slyly off-putting financial analyst named Tom (Christopher Abbott). While Tom is far from fleshed out, there's a little more to him than the rest of the insufferable partygoers. McDonagh wants us to despise them (and we do). But it's hard to see anything other than boozy, coked-up Westerners. They're paper-thin caricatures whose inflammatory blabber comes across as manufactured more so than authentic.

Then you have the scenes with David and the Berber locals. While McDonagh clearly means for our sympathies to be with the indigenous people, it always seems like the movie is viewing them through a first-world lens. It paints their plight with such broad strokes and often speaks to their circumstances in crude generalities. Even the Moroccan staff at Richard's party-pad get short-changed by some well-intended misjudgments. What makes this such a big deal is that the movie clearly wants to say something, and in a roundabout way it does. But it does so at the expense of the victims whose individual stories would have been far more interesting than watching hedonistic elitists on decadent benders.

To be fair, there are some revealing scenes at Abdellah's village -- eye-opening moments for both David and the audience. Also, the film is helped by its two solid leads and watching the evolution of their characters is among the story's strengths. Fiennes is so convincingly vile that we can't help but view any tiny emergence of a conscience with skepticism. Chastain doesn't get as much to work with, but (as usual) makes every scene count. But they can only do so much with a film that seems so unsure of itself. Its messages are clear, but the shaky conveying of those messages leaves "The Forgiven" less of a sharp-edged critique and more of a well-meaning misfire.