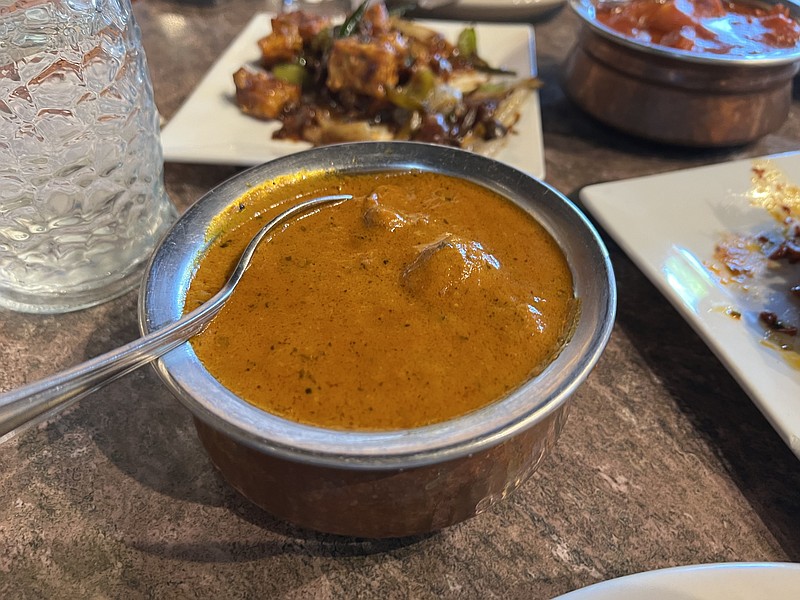 The lamb in Saffron's Iran Gosh was tender; the sauce was flavorful but not particularly spicy. (Arkansas Democrat-Gazette/Eric E. Harrison)

Earlier this year, new folks took over the ownership and management of Saffron Indian Cuisine, in The Center at Ten shopping center, on Cantrell Road a bit west of Interstate 430, Little Rock.

We didn't get a chance to check out the new weekend lunch buffet, but the menus posted on Facebook have looked impressive.

We did get to check out the menu, which has undergone a few revisions, though the small handful of items that intrigued us most weren't available.

Luckily, we found acceptable compromises. The food was almost universally praiseworthy; the service, even when it didn't descend to what appeared to be downright peevish, perhaps not so much.

Saffron seats about 60 diners comfortably in a pleasant, if somewhat dark-ish, atmosphere, accented by South Asian music played rather loudly over the sound system. The obligatory depiction of the Taj Mahal is one of several pieces of artwork, which includes a striking portrait of a rooster on the back wall (between the dining room and the kitchen) near a framed proclamation that "All Meat Is Halal Certified," which means it adheres to Muslim dietary laws.

We found some intriguing items on the appetizer list, including the Duck Sarpotel ($8.95), described on the menu as "crispy duck, [with] crushed roasted spices in garlic chili sauce served with paratha," a type of Indian flatbread. Except — well, it wasn't available.

The kitchen scored well, however, on two appetizers that were available. The Paneer Chili ($10.95), crisp battered paneer (an Indian variety of cottage cheese with a texture similar to tofu) tossed with onions and peppers in a modestly spicy chile sauce, was delicious, but not as delicious as the Chicken Mambari ($9.95), crisp-sauteed chicken in a spicier chile sauce with bits of celery and ginger. Both portions were large enough to serve as small entrees.

Intrepid Companion, continuing a personal survey of area restaurant lentil soups, enjoyed this one ($4.49), labeled a house specialty on the menu, a little lighter in color than what is normally seen, and with a slight citrus kick.

Two menu items from the tandoor (the cylindrical clay or metal oven instrumental in Indian roasting) particularly struck our fancy, one on each visit. Both were among the dishes that looked good in pictures that flashed across the TV screen near the front entrance. (There ought to be a law or a regulation or something that prohibits piquing customers' interest that way and then not delivering on the promise.)

◼️ The Peshawari Lamb Chop ($21.99), marinated rack of lamb, with fresh ginger juice, yogurt and spices. Our server told us some days, lamb chops just are "not on the market" and advised us to call ahead next time and maybe we'd get lucky.

◼️ The Whole Red Snapper ($19.99), prepared with roasted chiles, cumin, coriander and hung yogurt (that, according to our trusted online food source, is plain yogurt from which whey has been strained out through cheese- or muslin cloth — we learn something new every day.) It looked particularly enticing in the photo, too. We were entirely too discouraged to find out whether we could try the alternative, a whole branzino.

We ended up instead choosing three dishes, served in little brass pots, that looked similar but of course didn't taste the same, all of which, given the option, we'd order again:

◼️ Chicken Vindaloo ($13.95), cubed chicken in a garlic and vinegar concoction (that's the menu term) with smoked cloves and madras chiles. The chicken was tender — we've had this dish with chewy and/or dry chicken, and believe us, you don't want that.

◼️ Irani Gosh ($15.95), chunks of lamb in a caramelized onion sauce with discernible cardamom. The lamb, too, was surprisingly tender; we've had too many dishes in South Asian restaurants where the kitchen overcooked the lamb, so this was a pleasant surprise.

◼️ Tamilian Fish Curry ($14.95), chunks of reasonably moist mahi-mahi in a coconut cream sauce with curry leaves and tiny, whole red chiles. (We spent a little time separating the peppers, which, of course, are the same color as the reddish-brown sauce, and thus fortunately avoided biting into one.) 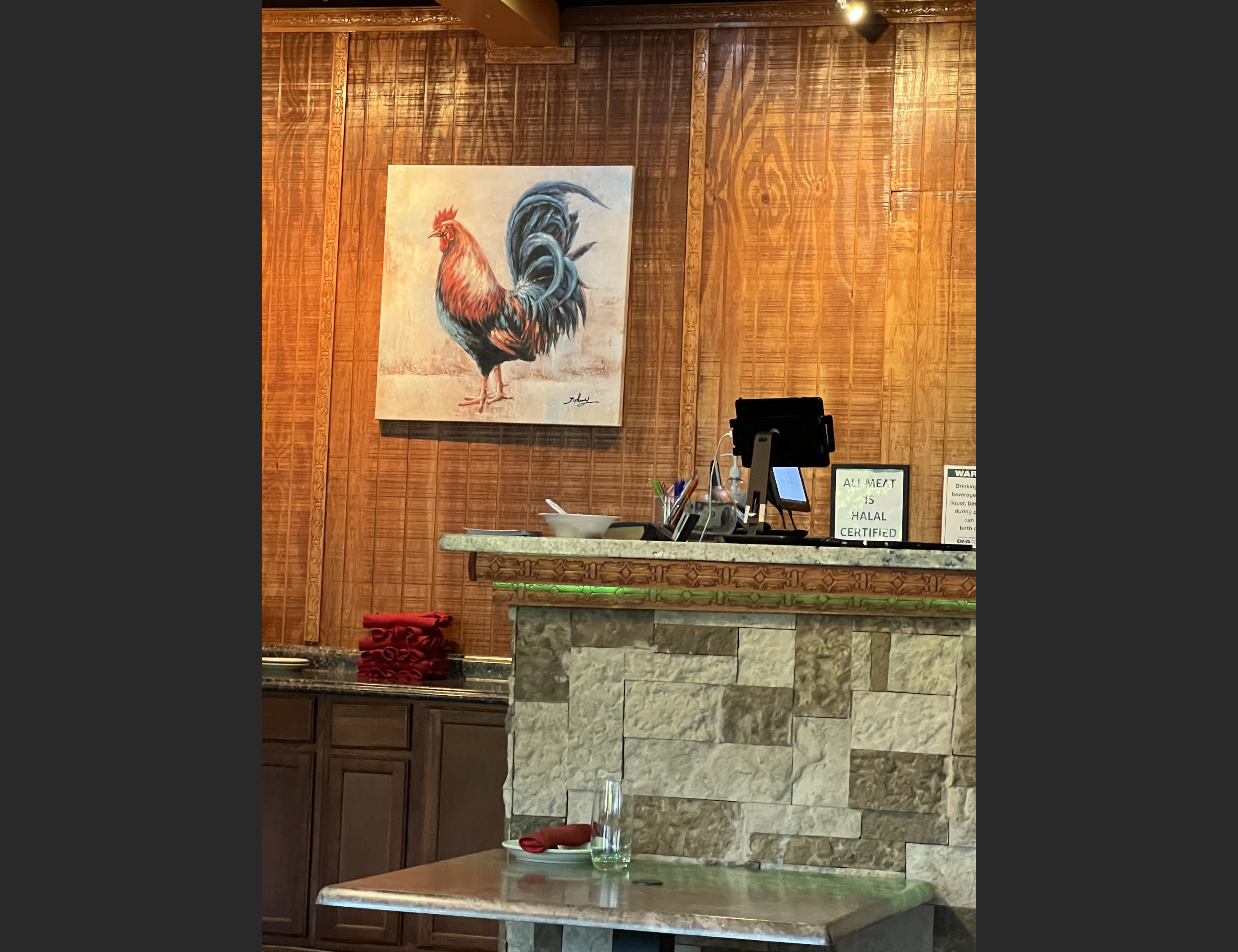 A striking portrait of a rooster occupies a position on the back wall (between the dining room and the kitchen) near a framed proclamation that "All Meat Is Halal Certified." (Arkansas Democrat-Gazette/Eric E. Harrison)  We were not asked, on either visit, how spicy we wanted our dishes, which we consider a must at Indian restaurants — both as a measure of palate protection and because people's preferences should be taken into account. As a result, though we enjoyed the dishes with the spice quotient we got, we might have preferred at least one of these dishes to be spicier. Or milder. Or at least have had the option.

That was only one of the little service issues we encountered. It took a long while for the single waiter to come and take our order, and he was somewhat less than gracious about the process. He never asked us whether we wanted a beverage other than water, which comes in a serve-yourself, well-chilled, pebbled-textured bottle with a swing ceramic stopper (similar to Dutch beer bottles). We never got, though we saw it being brought to other tables, complimentary papadam with, or without, chutney.

And we only saw the waiter at the beginning, to take our order, and at the end of the meal, to bring our check. For all other issues we dealt with the much more pleasant and helpful food runner.

We can, returning to our meal, recommend from the list of breads, Saffron's Garlic Naan ($2.95), which, not as crisp as we might have liked, was well crusted with garlic (again, not to disparage other area Indian restaurants, but a lot of garlic naan appears to involve waving a clove of garlic at a piece of flatbread). And we particularly enjoyed Intrepid Companion's choice, the Cheese Chilly Naan ($3.95), stuffed almost to the point of oozing with a zippy homemade spiced cheese with bits of green pepper.

When we finally tracked down somebody to order some yogurt-based Mango Lassi ($3.50), it came in wine glasses with plastic straws that were ridiculously twice the height of the glass. We learned by the second visit to just drink it without artificial assistance.