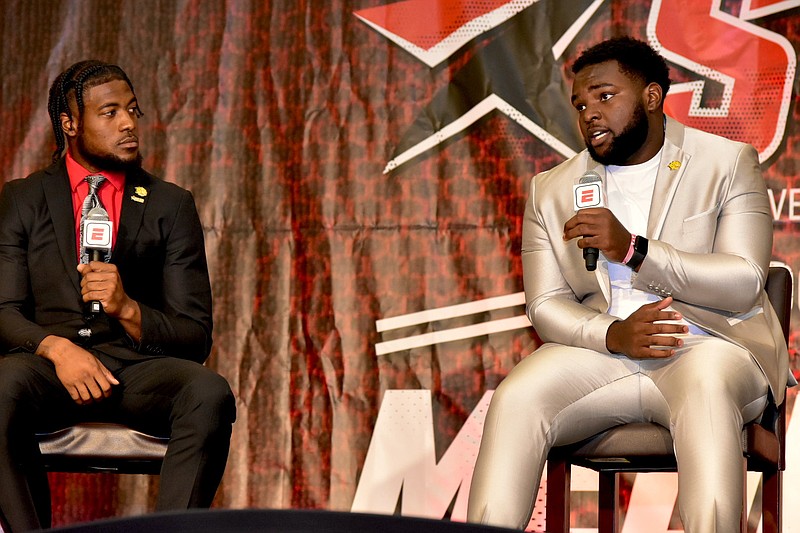 BIRMINGHAM, Ala. – A year ago, Mark Evans II drew national attention with a pair of gold-colored shoes, and that was before he even earned a name, image and likeness deal with restaurant chain Denny’s.

For Thursday’s latest SWAC Media Day, the University of Arkansas at Pine Bluff left tackle raised his shoe game. He went for silver with confetti.

And, what do the shoes say about Evans?

“I want to say flashy, in a way,” the usually reserved Evans said.

Of course, he didn’t just go without saying anything during his second straight Media Day at the Sheraton-Birmingham.

Evans and third-year Coach Doc Gamble brought along quarterback Skyler Perry for the annual reporters’ combine, and they faced their share of questions about how a highly successful spring 2021 season that ended in the SWAC championship game was followed by a sharp downturn during the fall.

“You better have some depth,” Gamble said, when asked what he’s learned from a full season. “In 2021, I told all the guys, we could have gone against anybody, and we did do that. We made it to the championship game. If somebody gets hurt, we’re going to be – whoa, who’s the next guy up? We had a lot of young talented guys, but they just hadn’t played a lot of football.”

This year, the Lions have six returning starters on offense and seven on defense. Not only that, they’ve put in a full summer of workouts for the first time since 2019, following the impact of the covid-19 pandemic and a spring season that ended in May.

“This is the earliest we’ve been back for summer training since we’ve been here,” said Perry, a fifth-year starter. “It’s been time to put in the work and grind. It’s time to put last football season in the past, but not forget it because you don’t want to remember it.”

The Lions were outscored 415-218 last season, with opponents doing the most damage in the first half (251-112). Perry returns as the team’s second-leading rusher (388 yards and three touchdowns) from last season, but he’s looking to shore up passing numbers, after throwing nine interceptions against 6 touchdowns and completing only 50.3% of his passes for 1,786 yards.

Last season was the first at UAPB for quarterbacks coach Kendrick Nord.

“We’ve been taking not so much of a different approach but more study time, seeing things we correct as small things, nothing major,” Perry said. “We already had a chemistry and have been on the downside of things, so we’re just handling the small things, understanding where we need to be.”

Sophomore right tackle Noah Hayes and Evans are returning starters on the offensive line – aka TMC, or The Moving Crew – which helped the offense generate 321.5 rushing yards per game. Opponents got to the Lions’ backfield for 25 sacks totaling a loss of 154 yards.

“It all starts with the offensive line,” Evans said. “We’re looking to increase all numbers from last year, lower the sack amount, get the run game up and all that. We’re just looking to have a better season than last year all the way around.”

It’s just a matter of who will be Perry’s go-to playmakers.

“I think the strength of the team is our offensive line. We went through spring practice and did something nobody else has done before … and we had eight healthy offensive linemen through 15 practices. Three of the five guys who have played for us are all-conference selections, so that’ll be a big key for us. Once we shore up our back end – and I think we’ve got some really good parts back there – we’ll be fine. We’ve still got to find out who’s going to be some wideouts. We graduated a lot of dudes who played a lot of football.”

Gamble even experimented with moving some offensive players to the defensive side late last season to address injuries that hindered the Lions. On the defensive line, he’s found some help in Athen Smith, a sophomore who started 9 of 11 games as a true freshman.

Preseason camp begins Aug. 5, and it will be the Lions’ first opportunity to put all the pieces together, as Gamble put it, following a year of unforeseen struggles.

“For us, I think it’s always pressure because we want to win every game,” Gamble said. “To me, it’s always been internal pressure. Everything has always been about us. The faster we put last fall season behind us, the better we’re going to be this year.”