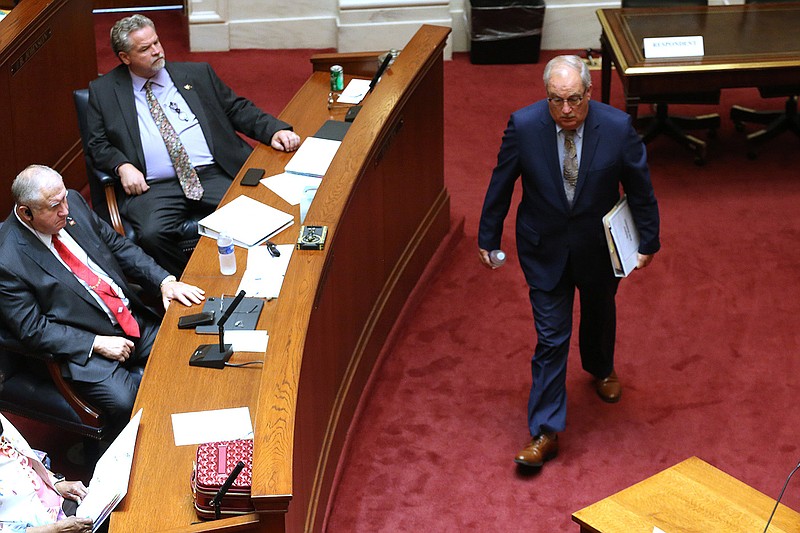 The Arkansas Senate on Thursday handily approved its Ethics Committee's recommendations for punishment against Sens. Alan Clark, R-Lonsdale, and Mark Johnson, R-Ferndale, after approving the committee's findings that Clark and Johnson violated the Senate's ethics rules.

The Senate Ethics Committee found that Clark admitted he didn't attend the Senate Boys State committee meeting June 3, after he said he was sick, and he knowingly sought reimbursement of public funds by asking Johnson to sign Clark's name on the sign-in sheet. The Senate didn't pay the $155 per diem to Clark for that meeting at the behest of Senate leaders, the Ethics Committee reported.

The Senate voted 26-2 to approve its Ethics Committee's recommended penalties against Clark, after the chamber voted to concur with the committee's findings that he violated two of the Senate's ethics rules.

Sens. Bob Ballinger, R-Ozark, and Charles Beckham, R-McNeil, dissented on the vote to approve the recommended penalties against Clark, who has served in the Senate since 2013.

The Senate's votes to follow its Ethics Committee's recommendations for punishment means that Clark has been stripped of committee chairman and vice chairman posts and his eligibility for per diem and mileage reimbursement for the rest of this year, reprimanded by the Senate, and future Senate president pro tempores are not to consider Clark for appointment to serve in the future on Boys State, Girls State or the Senate Ethics Committee.

Ballinger and Beckham said they favored stripping Clark of his chairman and vice chairman posts and eligibility for per diem and mileage for a 90 day-period rather than for the rest of the year.

Clark told senators Thursday that he was dressed and on his way to the state Capitol on June 3, but he had two hours of sleep and was running a fever.

"Had I had come on over and signed in, we wouldn't be here," he told his fellow senators. But he said he didn't want to make teenagers participating in Boys State in the Senate sick, so he didn't come into the state Capitol and sign in to be paid reimbursement for per diem.

Rapert said "no actual money ever got paid to Senator Clark, so in some ways the process has been somewhat intervened because he did not receive anything."

He said he sympathizes with the fact Clark was ill.

"We have all seen members that have a habit of popping in committees and signing [in for per diem and mileage] and then leaving intentionally, and nobody ever says anything," Rapert said. "Well, at least some people say something. But many of us are left wanting as to know how in the world that can be an existing common practice that is well known."

He said there is some inequity in the punishment that the Senate is preparing to hand out to Clark.

"Good character is needed up here," she said.

In a voice vote, the Senate voted to adjourn after Sen. Bill Sample, R-Hot Springs, made a motion to send its Ethics Committee's reports and records of the Senate's actions to Prosecuting Attorney Larry Jegley. Hickey said he opposes Sample's motion and Sen. Bart Hester, R-Cave Springs, made the motion to adjourn.

The Senate's votes to follow its Ethics Committee's recommendations for punishment means that Johnson has been stripped of any chairman and vice chairman posts, and his eligibility for per diem and mileage reimbursement and removed from the Ethics Committee for the rest of this year, reprimanded by the Senate, and future Senate president pro tempores are not to consider Clark for appointment to serve in the future on Boys State, Girls State or the Senate Ethics Committee..

Ethics Committee Chairman Sen. Kim Hammer, R-Benton, told senators that Clark and Johnson are still eligible for the state to pay their out-of-state travel expenses to attend out-of-state legislative conferences for the rest of the year.

The Ethics Committee found that Johnson signed the name of Clark on the sign-in sheet for reimbursement of per diem at the Senate's Boys State committee meeting June 3 when Johnson knew that Clark didn't attend the meeting.

Johnson on Thursday apologized to senators "for having to go through this process.

"I did something that I shouldn't have done, whether it was of inattentiveness or not paying close enough attention to what [Clark] had texted me or whatever," Johnson said. "But I did sign his name and that was wrong."

Johnson said he had inferred that Clark already had been at the Boys State committee meeting earlier June 3 because he was outside the state Capitol for about 40 minutes for a doctor's appointment and "when Senator Clark made the request of me [in the text message to sign in for him] I was operating under the presumption that he was in the room during the time that I was not there, and that was in error.

"I was wrong," he said. "I did not verify that fact, but I want to insist to my colleagues that I am not a liar and I did not lie."

Clark said he finds it interesting and bothersome that the Ethics Committee found it that easy to find that Johnson lied.

But Flowers said "I didn't think he was telling the truth."

Johnson said he agrees with the Ethics Committee's recommended punishment against him.

But he said "if I have a prayer in this it is that the Senate can move past this, and that we didn't set any bad precedent that we regret later in how we do business."

Both Clark and Johnson said the Senate Ethics Committee's three days of hearings on the ethics complaints filed against them would have been better if the committee heard testimony and evidence in public rather privately in executive session.

Johnson said the Senate should consider livestreaming its consideration of the Ethics Committee findings and recommendations in the future.

In June 2018, the state Senate approved an overhaul of its rules to create a committee on ethics, prohibit senators from certain activities involving conflicts of interest, and require more disclosure of other conflicts and personal finances. The Senate's action came after federal investigations in the previous few years led to convictions of several former state lawmakers.

The ethics complaints filed by Hickey against Clark and Johnson are the second and third complaints since the overhaul of the Senate's ethics rules four years ago.

In November 2020, Sen. Trent Garner, R-El Dorado, announced to senators that he was filing an ethics complaint against Sen. Jim Hendren, who is now an independent from Sulphur Springs.

The state Senate initially dismissed Garner's ethics complaint against Hendren as frivolous. The Senate Ethics Committee later held a closed hearing on Garner's complaint and recommended the Senate dismiss the complaint before Garner withdrew the complaint. 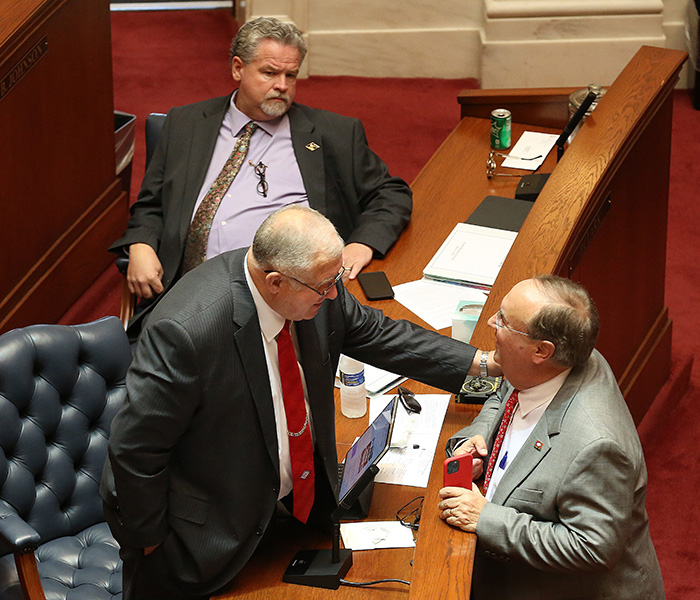