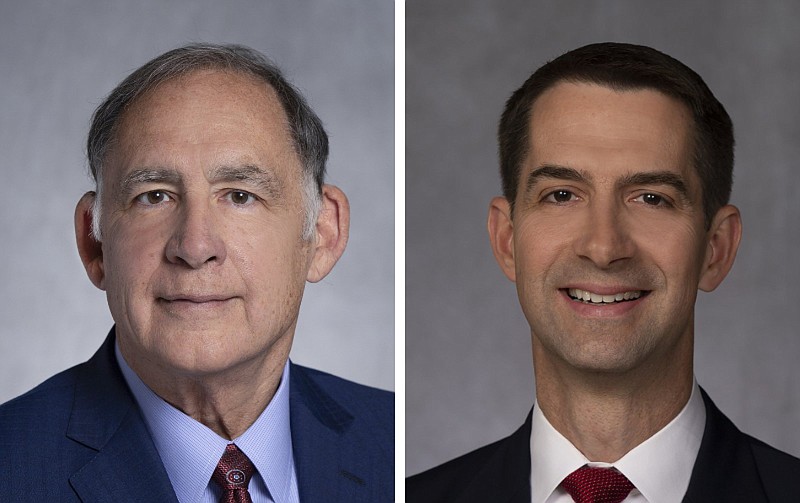 WASHINGTON -- U.S. Sens. John Boozman and Tom Cotton are criticizing an effort to pass legislation that would protect same-sex marriage under federal law.

Despite their comments, the GOP senators from Arkansas did not disclose whether they would vote to oppose the bill, which cleared the House in a bipartisan tally last week with 47 Republicans joining Democrats in support of the measure.

The same-sex marriage bill is in response to the Supreme Court's decision overturning the landmark 1973 abortion case Roe. v. Wade, which prompted worries that other rights might be in jeopardy.

Members of Arkansas' all-Republican congressional delegation painted the bill as a political play by Democrats.

Boozman of Rogers, in a written statement, said the Supreme Court "explicitly said fears its ruling would challenge same-sex or interracial marriage are unfounded."

"This bill is an attempt by Democrats to score political points by manufacturing hysteria and panic, in addition to escalating their ongoing attacks against the Court," Boozman said. "That is unfortunate and a disservice to every American."

His office did not say whether he would support the legislation.

Cotton of Little Rock cast criticism on the legislative effort as well.

Cotton declined to speak on the topic with the Democrat-Gazette on Thursday.

Senate Majority Leader Charles Schumer said on Wednesday that he wants to bring the bill to the floor.

All four Arkansas members in the House voted against the same-sex measure.

"People need to understand that this is the political environment we're in right now," he said. "It's kind of a form of playing gotcha."

Arkansas House Minority Leader Tippi McCullough, a Democrat and the first openly LGBTQ person to hold the position, said Americans who are in same-sex marriages deserve to have stability with their rights.

Roe v. Wade, a 7-2 decision, classified the right to an abortion as constitutionally protected.

A Gallup poll of 1,007 adults conducted in May found that 71% of Americans support legal same-sex marriage. The poll's margin of sampling error was 4% ±.

McCullough called the delegation's votes "disappointing" and said Thursday that she planned to reach out to U.S. Rep. French Hill about his vote.

"While we can say this is something that's decided law and settled law and we should move past it, we can see that things can change," she said.

In the Supreme Court case that overturned Roe , the majority opinion said the decision "concerns the constitutional right to abortion and no other right."

The House legislation would outline in federal law that states must recognize marriages from other states, said Danielle Weatherby, a professor of law at the University of Arkansas Fayetteville.

The action from Congress is appropriate given the overturning of Roe v. Wade by the Supreme Court, said Weatherby, who researches emerging legal protections for transgender people.

"We're seeing, in all branches of government, the possibility or the opportunity for rights that were originally recognized to be taken away," she said.

Jerry Cox, executive director of the Family Council, took issue with the same-sex bill in Congress, arguing states have traditionally been in charge of who is allowed to marry.

"I think it's troubling because you don't know how far the federal government will go" into areas typically handled by states, he said.

Cox said he was "appalled" by the 2015 decision from the Supreme Court. The Family Council, a conservative group, agrees with the marriage definition outlined in the Defense of Marriage Act.

"That is the proper definition of marriage," he said.

U.S. Rep. Rick Crawford of Jonesboro called the legislation "unnecessary" because of the Supreme Court's prior ruling. He said he does not support same-sex marriage.

U.S. Rep. Bruce Westerman of Hot Springs accused Democrats of playing "political games" and using the issue as a distraction "because they don't like what they're seeing with inflation," he said. Westerman said he believes marriage is solely between one man and one woman.

Hill, in a written statement, said American citizens "can already marry whomever they wish regardless of sex, race, religion, or national origin."