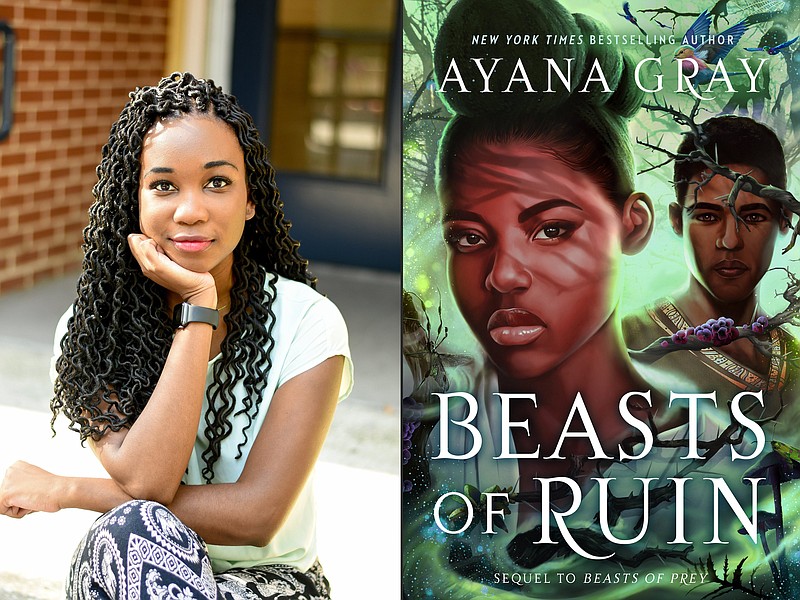 It's been almost a year to the day since we last spoke with Little Rock author Ayana Gray. In that time her debut novel, "Beasts of Prey," the first in a pan-African science fiction trilogy filled with magic and monsters, was published by Putnam, became a New York Times bestseller and attracted the interest of Netflix, which is developing the novel into a feature film.

And now the follow-up, "Beasts of Ruin," will be released Tuesday.

"It's been a lot," the 29-year-old Gray says earlier this month at Nexus Coffee & Creative in Little Rock. "I'm still getting used to saying that this is all real."

She will take part in a book-release event and conversation with Democrat-Gazette Sunday Style Editor Helaine Williams at Words-Worth Bookstore in Little Rock on Thursday.

In "Beasts of Prey," Gray introduced readers to Koffi and Ekon, two mismatched teenagers from different backgrounds who formed a tentative partnership to track down the dreaded Shetani, a nightmarish creature terrorizing the city of Lkossa. In the process, Koffi learns of her powers as a daraja and Ekon, the son of a war hero, begins to doubt his destiny to become an elite warrior like his father and brother.

Gray has not lost pace with her second book. "Beasts of Ruin," like its predecessor, is filled with action and tension. There are fights, spells, chases, twists, betrayals, a wicked villain and fantastical creatures throughout the novel's short, punchy chapters. She weaves African myths and legends of frightening creatures like the kongamato into her narrative, and explores the impact of discrimination and cultural erasure against the fictional darajas, who are often women and who are feared and shunned by society for their powers.

"I think in [the book] and the real world, people get uncomfortable when they see women and young girls show and embrace power," Gray says. "I wanted to write about a girl coming into her power and, like the kongamato, who are considered scary, disruptive creatures, in reality are not. They're just misunderstood."

The new book finds Koffi trapped with other darajas by Fedu, the evil God of Death, in Thornkeep, which is surrounded by the terrifying Mistwood, a sort of purgatory for trapped souls. As she plans her escape she begins to realize she is a much stronger daraja than she could have ever imagined. Meanwhile, Ekon has teamed with Koffi's grandmother, Themba, who is also a daraja, and a group of spice and herb smugglers to help him get to Thornkeep and rescue Koffi.

Keeping the two main characters apart for most of the book and exposing them to other characters and situations was a risk, Gray admits, but it allows them to develop beyond just their relationship with each other.

"I wanted to separate them because I wanted them to explore who they are as individuals and not just this couple. A lot of times with YA [Young Adult] fantasy, you have this thing called insta-love, the idea that these two characters meet and instantly fall in love and are ready to die for each other. Knowing that teens are going to be reading these books, I want to dig a little deeper. Can you really be in love with someone you've only known for a few days? Is that a really healthy way to feel about someone?"

Gray is a graduate of the Fulbright College at the University of Arkansas, Fayetteville, where she studied political science and African and African American studies. She began writing "Beasts of Prey" in 2015 and spent years honing the story before a publisher was involved. The second book, with its deadline and expectations, presented its own set of challenges.

"It was easier and harder in different ways," she says. "It was easier because I had the characters and the world established. It was harder because now I'm balancing different responsibilities. There's a time constraint. I didn't have five years. I had less than one year to turn it around, and readers have expectations. I've set a bar and I'm wondering, am I going to hit that bar?"

She reached out to other authors to work through the pressure of producing the second book.

"I leaned on my friends a lot. I turned in my first draft of 'Beasts of Ruin' and didn't feel good about it and immediately texted two author friends and said 'I feel terrible.' They told me that this was all very normal. People think the first book is the hardest, but the second book is sometimes the hardest."

Interest from Netflix came even before "Beasts of Prey" was released, and Gray has seen a script by Melody Cooper, who has written for "Law & Order: Special Victims Unit."

"That's one of my favorite shows," Gray says. "She saw the African historical figures referenced in 'Beasts of Prey' and recognized them. I felt like she really understands what I was trying to do, and she's a Black woman and I was really happy to put it in her hands. It's been surreal."

The publication date for the third book of the trilogy has not been announced, but Gray knows her time with Koffi and Ekon and the world she's been building for seven years will eventually come to an end.

"I'm excited to do something that will let me expand and try something new," she says. "In 2015 I was 22 years old. I've grown and changed, like anybody would, in the last seven years."

She will likely continue to create books for young adults, she adds.

"I'll never say never, but YA is my favorite. I like that YA stories are about people finding their place in the world and figuring out who they want to grow into. You're not a little kid anymore; you're not an adult yet; you're in this in-between space that's really emotionally fraught and complicated."