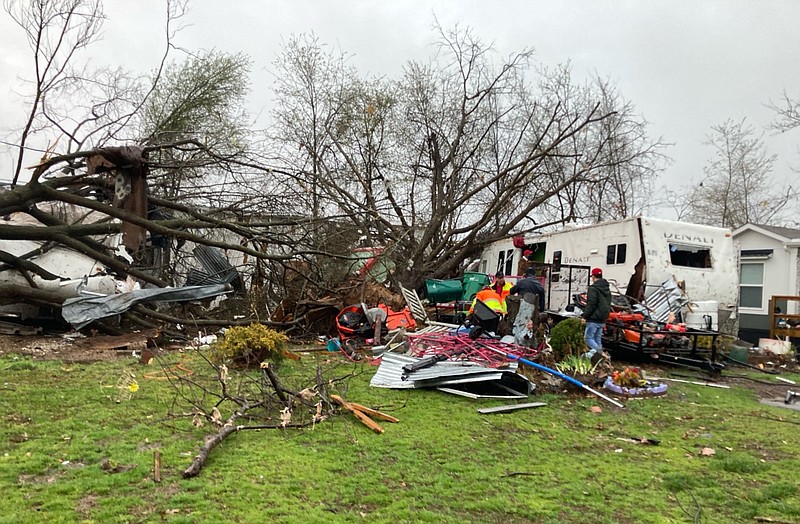 Damage from a tornado at Woodridge Estates Mobile Home Park on Powell Street in Springdale is shown in this March 20, 2022 file photo. (NWA Democrat-Gazette/Laurinda Joenks)

Debris litters the Woodridge Estates Mobile Home Park as resident Kristy Miller and others continue to gather the wreckage almost four months after a tornado ripped through the neighborhood.

The tornado formed around 4 a.m. March 30 and traveled about 5.2 miles with wind up to 145 mph, according to a survey by the National Weather Service. Its path began in Fayetteville near the Northwest Arkansas Mall. From there, it traveled northeast, downing trees, damaging 164 homes, snapping electrical poles and lifted the gym of George Elementary School.

Woodridge Estates Mobile Home Park experienced some of the worst damage. The tornado ripped through the park, uprooted trees into mobile homes, lifted trailers into the air and launched debris across the park.

From nightmares to financial burdens, some victims are still living with the storm's impact every day.

Natalie Torquato, whose house behind George Elementary School was severely damaged, still sees the impact of the storm in her 4-year-old son. She has been taking him to trauma therapy.

"Like, every window is a fear, every sound from the sky is a fear," Torquato said. "Whenever the weather changes, he literally gets back in the bathtub and cries. And it breaks my heart. I had to get him therapy for it. And it's going to take years to even remotely get back to where we were."

David Todd, a licensed trauma-focused therapist in Searcy, said natural disasters such as tornadoes can leave children with stress and anxiety, flashbacks and nightmares and – in the worst cases – post-traumatic stress disorder.

Miller said many children in the mobile home park are experiencing trauma.

"We have children now in the park that no longer want to sleep if there's a storm," she said. "Or, they no longer want a tree next to their home because it's going to kill them."

Todd said it's important for kids to have a way to process the tornado. Talking is the best medicine, he said.

Miller said the memories from that night were horrific. The tornado didn't hit her trailer, but it was about 50 yards away, she said.

Karen Barnes, a Springdale resident whose home on Chantilly Avenue was right in the storm's path, ran out of her bedroom to the bathroom right before five windows imploded.

"The trauma of having to basically run for my life," Barnes said. "I'm doing better now, but for three weeks, every day there were just terrible storms and wind. I had nightmares. It impacts you in a way that you don't expect."

Barnes had already experienced one EF3 tornado in her life, but the worst part of this storm was having no warning, she said. Springdale doesn't have a tornado siren, but a digital warning system called Springdale Alert. However, the National Weather Service didn't issue the warning until after the tornado had touched down.

"When I found out that Springdale does not have a tornado warning system, that's a huge miss," Barnes said. "Their excuse was that they needed to have someone on site to set it off, or that the software updates were too expensive. How do you put a price on a life? There's no excuse."

Springdale Fire Chief Blake Holte said the city hasn't had a tornado siren since before the 1980s. There used to be one in the central fire station firefighters could turn on if they knew about a tornado.

"That wasn't particularly effective, and it's certainly not effective anymore," Holte said.

Mayor Doug Sprouse said the city will probably not add sirens because of the cost to cover the whole city.

"Our system worked the way it should," Sprouse said. "They just didn't get the warning until after the tornado had already hit."

Some storm victims applied for loans through the federal Small Business Administration. The process can take weeks, as officers examine the applicants' financial histories. If they didn't qualify for loans -- usually because their credit history suggests they may not be able to pay the loan back -- they could then apply for state relief through the Arkansas Department of Emergency Management.

Rick Tillery, a spokesman for the Small Business Association, said 11 of 33 applications had been approved. The agency approved a total of $372,000 for homeowners and renters, and $270,000 for three businesses. The loans help cover physical damage to houses and businesses, Tillery said.

Applicants must have a history of paying taxes and be a legal resident of the U.S., he said.

LaTresha Woodruff, spokeswoman for the Arkansas Department of Emergency Management, said the state awarded a total of $98,945 in assistance to homeowners and renters impacted by the tornado.

Many people, like Torquato, didn't qualify for loans or state relief. Torquato said her family's annual income was too much, and their insurance covered too much to qualify.

Tillery said the Small Business Administration will step in to help people whose insurance doesn't cover everything.

Torquato doesn't think her family will ever get back to where they were financially. After hotel hopping for months, they recently moved to a house in Lowell, but they don't have any furniture, save for a kid table for her toddlers.

Torquato said her family didn't qualify for loans or state relief. They are repairing the old home to hopefully sell it, but the walls are molding more every day, and Torquato doesn't know how much everything will cost. With two toddlers and a newborn, she has been living day-to-day, she said.

"The insurance company is supposed to be paying me back on hotel fares, and driving costs and all that, but I'm in the hole," she said.

Torquato said her family was in a comfortable place financially before the storm hit.

"That was like the hardest thing for me personally, is that I was financially stable," Torquato said. "I had a routine with my kids. I was working, my husband was working. And we just had like, our own little worlds. And that kind of came crashing down. All of the sudden, I was financially unstable. Then, I had no place to go. No place to live."

Many residents of the mobile home park are still cleaning up the destruction from the tornado. Miller has been helping locate money and resources and making sure it goes to those who need it.

Miller said 31 mobile homes of the 121 in the park were damaged. Two households cannot afford to return. One homeowner didn't qualify for loans or state relief money because she didn't have a credit score.

As of July 1, five of the homes hadn't been repaired. They have power and water, but portions of the roof or walls are damaged. Miller said families are still living in the homes. These residents either cannot find the money for repairs or cannot find someone who will take the job. Miller said she feels like the people in the park have been forgotten.

Miller is still seeking out resources and donations to help the mobile homes that have not been repaired.

"If you were willing to help on the 30th of March, how about the first of July?" she said.