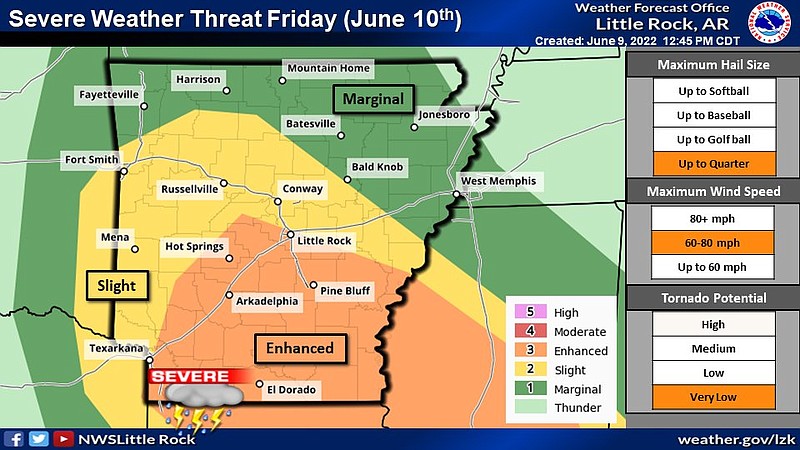 Portions of southern Arkansas are at an enhanced risk for severe weather on Friday, according to this National Weather Service graphic.

Arkansas is predicted to see thunderstorms on Friday that could be capable of producing damaging winds and large hail, according to forecasters.

According to a Twitter post from the National Weather Service in North Little Rock on Thursday afternoon, the maximum wind speed could reach 80 mph.  The risk for tornadoes is reported to be very low.

Joe Goudsward, a meteorologist at the weather service in North Little Rock, said the storm may be in the northwestern part of Arkansas between 4 a.m and 5 a.m., moving southeast across the state. Little Rock could see storms as early as 8 a.m.

Southern parts of Arkansas are at an enhanced risk to experience severe weather on Friday, according to the weather service. Forecasters said of the rest of the state is at a slight risk.

Goudsward said Thursday morning the state should be clear of the storm around 1 p.m. Friday.

The weather service also warns that slow moving thunderstorms and soil already saturated from recent rainfall could lead to flash flooding. This risk is higher after the rainfall from Wednesday leaving several small tributaries swollen, such as Fourche LaFave, Petit Jean and Saline rivers. Goudsward said that, statewide, Arkansas could receive between 1 to 2 inches of rainfall.

He said Arkansans should avoid driving on flooded roadways, regardless of whether they are familiar with the roads, and pay close attention to alerts from the weather service.

Next week, the state is expected to dry out, with hot and humid conditions forecasted. The weather service predicts temperatures exceeding 105 degrees as early as Monday.