TELEVISION: ‘The Boys’ producer and star talk about Season 3 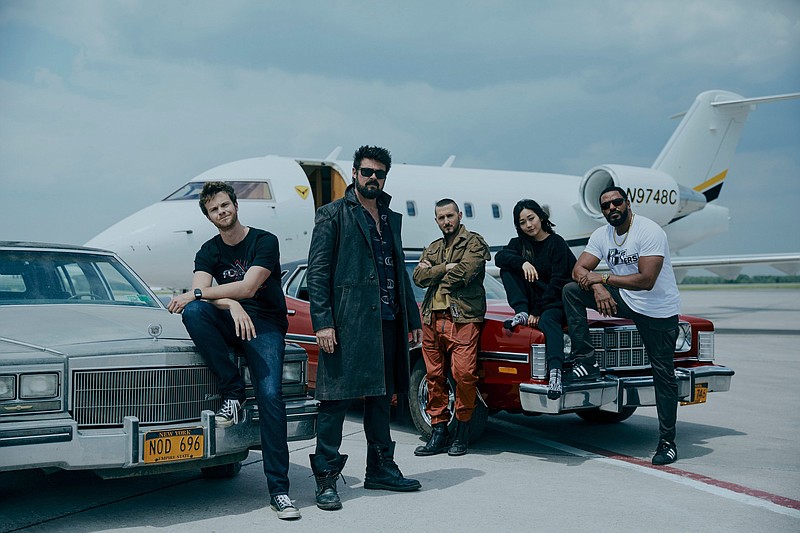 If a boa constrictor-like phallus and self-love on the top of the Chrysler Building didn't show that "The Boys" isn't your average superhero show, now it will become clear.

The Emmy-nominated Amazon Prime Video series is back for a third season, with the first three episodes premiering this week.

It's safe to say the wild opening sequence eclipses last season's monster member and onanism atop a city landmark.

"I think what we always try to do with the show, is we don't necessarily try to go bigger, instead we try to go deeper and more intense, and keep turning up the heat, and I think we've done that this season," Kripke, 48, said.

The show, developed from "The Boys" comics by Garth Ennis and Darick Robertson, debuted on Prime Video in 2019.

Audiences were immediately drawn into a version of New York City where superheroes are worshipped as gods while Vought, the company that created them, works overtime to cover up their true sociopathic natures.

The leader of the sadist superpowered squad is Homelander, the series' evil version of Superman. He lords over the other top "heroes" — Queen Maeve, A-Train, Starlight, Black Noir and The Deep — with a bloody, iron fist.

The Boys — a ragtag group of vigilantes that includes an ex-member of the British Special Forces, an OCD Marine vet, an assassin, a former stereo salesman, and a mute with powers — have made it their mission to rid the world of "supes."

This season starts with Antony Starr's Homelander on an apology tour after it was revealed that his girlfriend, Stormfront, was a Nazi. Starlight and Queen Maeve joined forces with The Boys to take down Stormfront and the Deep, the show's version of Aquaman, is still trying to weasel his way back into Vought's good graces.

As for The Boys, led by Billy Butcher, they've gone legit and are trying to beat the supes by working for a new government agency.

It doesn't go quite as planned.

"The Boys are pushed to a breaking point, I think Homelander is getting pushed over the edge of sanity, and so I think everything is really becoming a pressure cooker," Kripke explained.

The heat pushes Butcher, played by Karl Urban, to dose himself with a serum that gives him temporary superpowers, leveling the playing field a bit.

The presumed dead Soldier Boy, played by "Supernatural" star Jensen Ackles, is the first Vought superhero, who's been around since World War II. He's their Captain America and at last, a formidable match for Homelander.

"No one's ever been able to really make Homelander nervous about anything. Cause he is the ultimate top dog and nobody has powers greater than him, until now," Ackles told The News. "It's the first time that you really see Homelander challenged in a way that makes him vulnerable. Where that goes is certainly not what I was expecting."

With all it's exploding whales, odd aquatic encounters and gory deaths, "The Boys" is more than that. It aptly tackles the socio-political climate du jour. It has touched on the #MeToo movement, white nationalism, obsession with celebrity and social media. This time around, Ackles' character serves as an examination of toxic masculinity.

"This Marlboro Man, John Wayne crap has poisoned a couple generations of men, worldwide really, and has done as much damage as anything in putting us in a moment where, like these days leaders think it's more important to project strength than compassion," Kripke explained.

Ackles, 44, watched interview clips of movie stars from the '50s and '60s for inspiration.

"There's one in particular, one interview with Lee Marvin, where he is just sitting there. And he is just smoking a cigarette and almost looking annoyed at people asking him questions," Ackles said, adding, "I felt like Soldier Boy was just this grandpa, this old curmudgeon trapped in a superhero's body."

Kripke points out that the comics were written in 2006, but were spot-on in predicting the current cultural shift — and it's something he's building on.

"We had an opportunity, the concept of the show allows us to talk about this in a way few shows can," Kripke said. "We felt we'd be crazy to not delve into that as deep as we could."