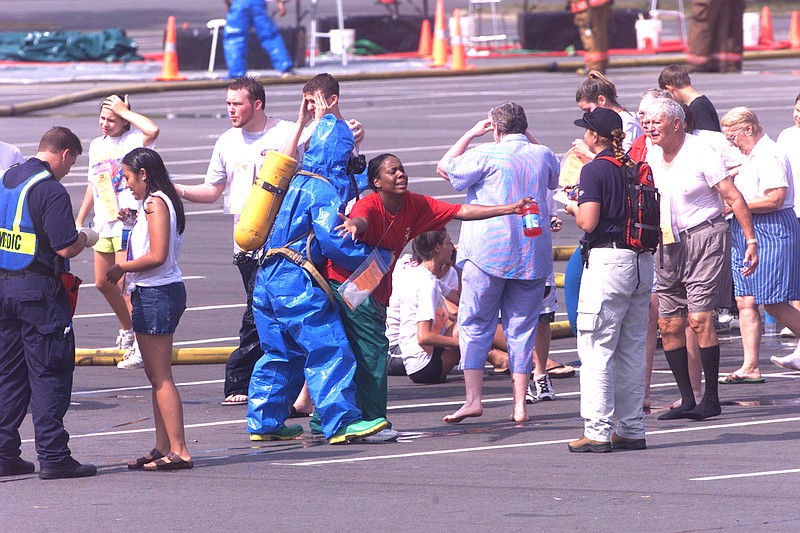 On June 12, 2002, a fictitious surprise attack unfolded at Little Rock's War Memorial Stadium. In the scripted scenario, a small box packed with a pipe bomb exploded, releasing the contents of two bottles of sarin, a deadly nerve agent, among the stadium crowd.

City police and fire units responding to a 911 call about an explosion found dozens of people outside the stadium begging for help -- in reality, they were volunteer actors, including children enjoying summer vacation.

This terrorism drill was part of a federal campaign for heightened first-responder training in 120 of the nation's largest cities after the attacks in New York on Sept. 11, 2001. Arkansas agencies had access to a $12 million federal grant for improving bioterrorism preparedness. The stadium scenario used part of $300,000 for Little Rock terrorism training.

Although the treatment and decontamination of the "victims" was successful, drill coordinators noted room for improvement. For example, police who first responded to the scene became contaminated by touching patients while consoling them. Panicky patients crossed decontamination lines intended to halt the spread of the faux nerve agent; and drill monitors wanted to see loud speakers used more effectively.

This was not the first responders' first fake rodeo. In years before the New York attacks, city emergency personnel rehearsed the aftermath of an explosive device in a crowded coliseum, and in August 2001, the drill scenario was anthrax released at Riverfest — a few months before actual anthrax attacks happened on the East Coast. But this was the city's largest weapons of mass destruction drill.