Senator indicates he will wait to decide based on specifics of written legislation by Ryan Tarinelli | June 14, 2022 at 6:50 a.m. 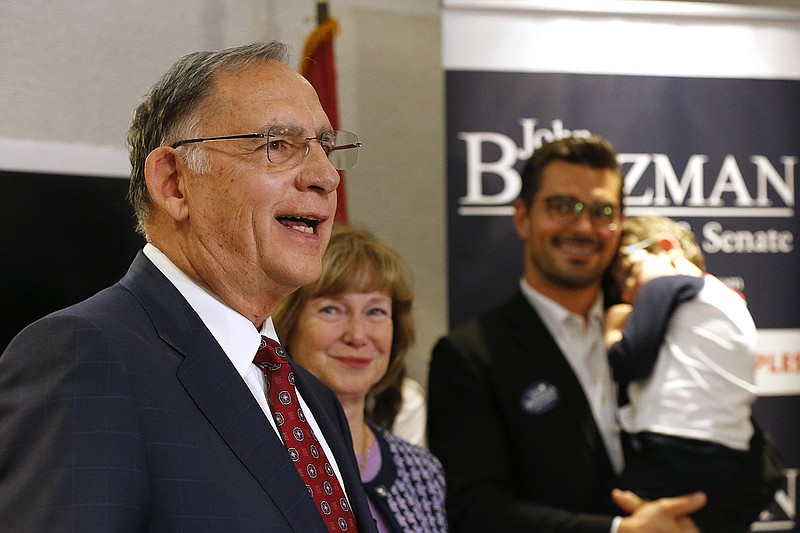 WASHINGTON -- U.S. Sen. John Boozman of Arkansas on Monday said he's open to considering a bipartisan agreement on mental health, school security and tougher gun measures, but added that he's waiting to see the specifics of the legislation.

A bipartisan group of lawmakers in the Senate rolled out the framework over the weekend, weeks after a massacre at an elementary school in Uvalde, Texas and a mass shooting at a supermarket in Buffalo, N.Y.

"I'm really curious what the actual text will look like," Boozman said on Monday.

Asked if there's any part of the proposal he viewed as problematic, the Republican lawmaker from Rogers said that will depend on how the legislation is written.

"We're very open and again I know that the people that have been negotiating [on] this have worked very hard and worked in good faith," he said.

The specific legislation has not been released, but the framework announced by the senators would expand mental health services, bolster school security and put in place tougher gun-related legislation.

Part of the bipartisan framework would require an "investigative period to review juvenile and mental health records" for gun purchasers under 21 years old, and give authorities additional time to complete a federal background check beyond the current three-day window to conduct background checks.

It would also provide states with resources to create and administer so-called red flag laws, which allow a court to prevent a person from accessing guns if they are found to be a danger to themselves or others.

The proposal would fund school safety resources and put money into programs that increase behavioral health services for children and families through telehealth.

"The mental health issues, I think that's an area that everyone agrees on. So those are good things," Boozman said.

U.S. Sen. Tom Cotton didn't respond to a request for an interview.

A group of bipartisan lawmakers, including 10 Senate Republicans, is backing the framework.

"Our plan increases needed mental health resources, improves school safety and support for students, and helps ensure dangerous criminals and those who are adjudicated as mentally ill can't purchase weapons," the bipartisan group said in a joint statement Sunday. "Most importantly, our plan saves lives while also protecting the constitutional rights of law-abiding Americans."

U.S. Sens. John Cornyn of Texas, Thom Tillis of North Carolina and Lindsey Graham of South Carolina are among the Republicans supporting the proposal. Neither Cotton nor Boozman were listed among the GOP senators backing the plan in the announcement.

President Joe Biden, in a statement on Sunday, said the proposal would not do everything he thinks is needed, but "reflects important steps in the right direction, and would be the most significant gun safety legislation to pass Congress in decades."

"Each day that passes, more children are killed in this country: the sooner it comes to my desk, the sooner I can sign it, and the sooner we can use these measures to save lives," the Democratic president said in the statement.