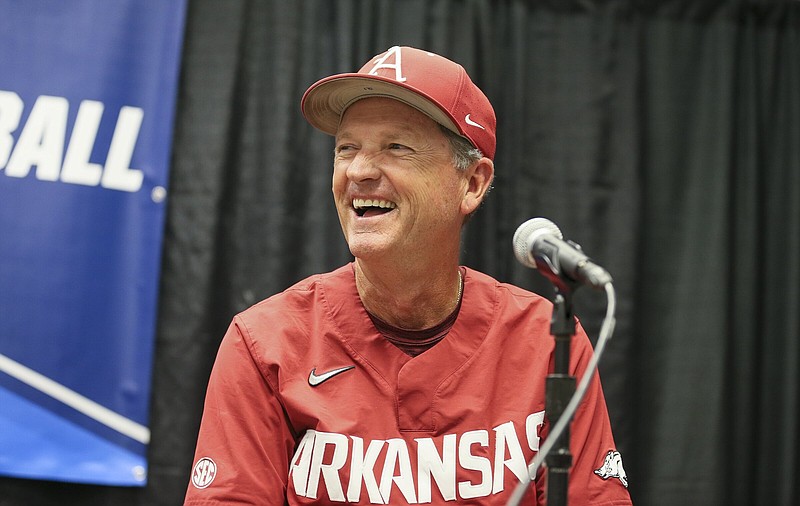 Vitello, who was a Van Horn assistant coach at Arkansas from 2014-17, led the Vols to SEC regular-season and tournament championships this season and the No. 1 overall seed in the NCAA Tournament.

But Tennessee isn't going to the College World Series.

Notre Dame beat Tennessee 7-3 in Game 3 of the teams' super regional on Sunday in Knoxville, Tenn., as the Vols ended their season with a 57-9 record.

Van Horn's Razorbacks won SEC regular-season and tournament championships last year and were the No. 1 overall seed in the NCAA Tournament, but they fell short of the College World Series. North Carolina State beat Arkansas 3-2 in Game 3 of a super regional at Baum-Walker Stadium and the Razorbacks finished 50-13.

Arkansas bounced back from the disappointment of last season to advance to the College World Series after winning 4-3 at North Carolina on Sunday to take the Chapel Hill Super Regional with a two-game sweep.

It will be the 11th College World Series appearance for the Razorbacks and ninth for Van Horn, including two at Nebraska and seven at Arkansas.

"I mean, it's hard to get there, I feel bad for them," Van Horn said when asked about Vitello and the Vols losing in their super regional. "I would have felt bad for Notre Dame if they would've lost.

"It's tough getting this far in the season and falling one game short. It's hard, and I'm sure [Tennessee] will be good again next year."

For much of this season, Arkansas was projected to be a top 16 seed and host a regional, and possibly a super regional.

But after the Razorbacks went 4-8 in their final 12 games before the NCAA Tournament, they found themselves being the No. 2 seed in the Stillwater Regional hosted by Oklahoma State.

The Razorbacks regrouped and went 3-1 in Stillwater, capped by a 7-3 victory over Oklahoma State -- the No. 7 national seed -- last Monday night to win the regional.

That earned Arkansas another road trip to play North Carolina, the No. 10 seed after the Tar Heels won the ACC Tournament and the regional they hosted last week.

The Razorbacks won the super regional opener 4-1, then rallied from a 3-2 deficit going into the bottom of the ninth inning on Sunday when they scored two runs, capped by Brady Slavens' game-winning RBI single.

"Before we play a series, I always look at our opponent and add up how old they are age-wise," North Carolina Coach Scott Forbes said. "If you look at Arkansas, they're an older team, especially positionally.

"You're looking at a team that was No. 1 in the country all of last year."

Among the six pitchers the Razorbacks used Sunday were starter Will McEntire -- who redshirted last year after pitching in the 2020 season canceled before SEC play began because of the coronavirus pandemic -- and relievers Kole Ramage, Evan Taylor, Brady Tygart, Hagen Smith and Zack Morris.

Ramage, Taylor and Morris are back from last season and Tygart and Smith are freshman All-Americans.

Also back to lead the pitching staff is No. 1 starter Connor Noland, a senior who pitched in the College World Series in 2019.

In Noland's two NCAA Tournament starts this season, he has gone a combined 13 2/3 innings against Grand Canyon and North Carolina and held the Antelopes and Tar Heels to 12 hits, 1 run and 4 walks with 10 strikeouts.

"They're a well-rounded team," said Oklahoma State Coach Josh Holliday, whose Cowboys were 1-2 against the Razorbacks in the Stillwater Regional. "They have good offensive players, they pick up the ball cleanly and they have pretty good depth of pitching."

North Carolina scored a run in the top of the ninth inning Sunday to take a 3-2 lead, but couldn't hold on to keep its season alive.

"It's just baseball I guess. It'll rip your heart out," Tar Heels shortstop Danny Serretti said. "You can feel on top of the world 30 minutes ago, and then feel like garbage now.

The Razorbacks won a super regional on the road for the third time. They also won under Van Horn in 2009 at Florida State and in 2012 at Baylor.

"It's impressive," Forbes said of Van Horn's College World Series resume. "But it's also not unexpected."

Forbes said the Razorbacks and Tar Heels are similar teams in how they approach the game.

"I have a lot of respect for them, because they do remind us a lot of us," Forbes said. "They hit home runs, they run around the bases. They run hard to first base. They're fundamentally sound."

Tennessee led Notre Dame 3-1 with two outs in the top of the seventh inning Sunday before the Fighting Irish rallied to shock the Vols.

"They say, 'Time heals all wounds,' " Vitello said in his postgame news conference. "I don't know who they are."

Tennessee, which played in the College World Series last season for the first time since 2005, became the 10th No. 1 overall seed since 1999 to not make it to Omaha.

It's happened the last three years the NCAA Tournament has been held, including UCLA in 2019 when the Bruins lost in the super regional to Michigan.

Miami in 1999 was the last No. 1 seed to win a national championship.

"I would like to make it automatic. I'd like to be able to recruit that well," Vitello said of advancing to the College World Series. "I certainly can't coach that well, that it is automatic.

WHEN 1 p.m. Central on Saturday