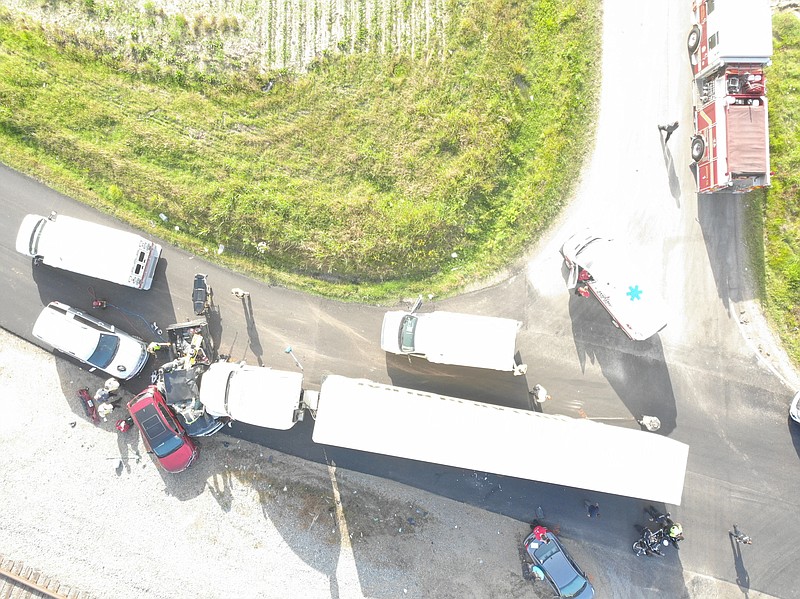 A tractor-trailer failed to yield to a stop sign in Jonesboro, striking a car and pushing it into three other vehicles. (Courtesy of Jonesboro Police Department)

One person was killed in Jonesboro on Tuesday morning when a tractor-trailer failed to yield at a stop sign and hit an SUV, according to a preliminary fatality report from the Jonesboro Police Department.

According to the Police Department, the tractor-trailer failed to yield at a stop sign around 7:30 a.m. while traveling north on Kathleen Street, hitting a black Chevrolet Silverado heading west on Prospect Road and pushing the SUV it into three other vehicles.

The driver of the Silverado was identified as Joseph Vesely Jr., 62, of Lake City. He died on scene, according to a Facebook post from the Jonesboro Police Department.

No other injuries were reported, according to Police Department spokesperson Sally Smith.

Smith said that the intersection is taken by tractor-trailers as a shortcut from U.S. Highway 49 to Arkansas 18.

Donna Gibson, a resident of Jonesboro, said she drives by that intersection multiple times a day and that she drove by right after the wreck.

According to her, the stop signs on Kathleen Street are often ignored or not seen by drivers in that area.

“I think during the morning and afternoon work traffic, it is just recklessness and people being in a hurry to get where they're going," Gibson said in a Facebook message.

"On the other hand, it's people who have discovered that road as a shortcut to the bypass from Highway 49 and they're just not aware or paying fully attention.”

She said there were stop signs and a sign that states cross traffic does not stop, but the layout of the intersection has elevated railroad tracks and often long grass that limit visibility.

“Maybe the least that could be done would be a flashing light at the intersection, more signs and maybe some rumble strips,” Gibson said.

The roads were dry and the weather was clear, according to the Police Department.