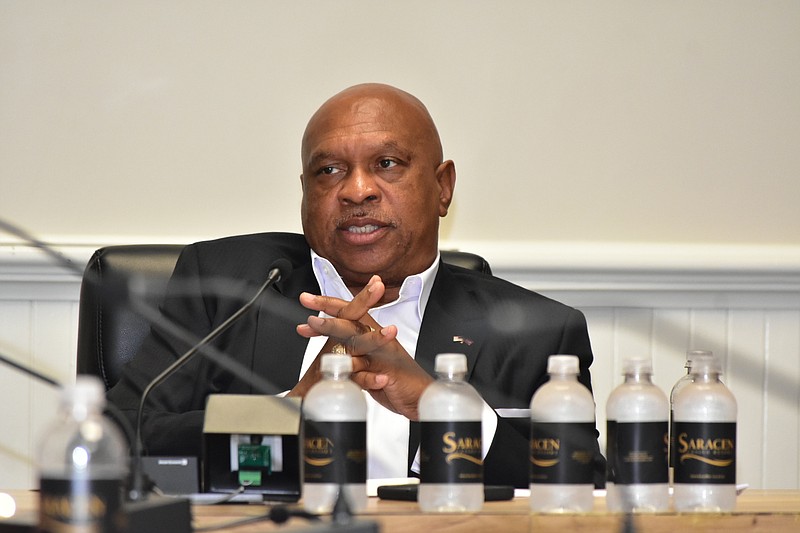 County Judge Gerald Robinson said questions about a proposal to extend a lease for a medical facility should have been asked last week during the Quorum Court's committee meeting. (Pine Bluff Commercial/I.C. Murrell)

A request to extend a lease on Jefferson Regional Medical Center's Pine Bluff campus and White Hall property met with resistance at Monday night's Quorum Court meeting, causing the measure to be tabled.

The measure, which County Judge Gerald Robinson called a "no-brainer," was being sought to accommodate Anchor Health Properties, which is the developer that is building the newly named Jefferson County Specialty Hospital in White Hall. The current lease expires in 2066, but Anchor required a 75-year ground lease as a condition for the development.

"This should have been a formality," Robinson said Tuesday. "It was very well explained during last week's committee meeting, all of the benefits not only to JRMC but to the county. This will double the capacity of the mental health beds, which we need drastically. I'm disappointed."

During Monday night's meeting, a motion was made to approve the lease extension. Justice of the Peace Alfred Carroll Sr. then made a substitute motion to table the lease extension proposal and have Robinson call a committee meeting of the whole Quorum Court to have questions answered. That motion failed.

The original motion, according to Robinson, then passed, but only by a 7-to-6 vote. Robinson then tabled the proposal because Carroll said the language in the proposal did not refer to the measure as a resolution, which only requires a simple majority to pass.

Carroll said he had received a few calls from constituents who had questions about the lease extension, and he wanted to have those questions answered before voting on the matter.

"I don't get a whole lot of phone calls," Carroll said. "So when I get five or six calls, that tells me people are concerned about it."

Carroll said the item was placed in the agenda packet last week "a minute before the committee met," which didn't give the committee members enough time to discuss the request. In the end, however, the justices of the peace voted to send the measure to the full Quorum Court.

"We didn't really discuss it in committee, even though it passed in committee," Carroll said. "Based on what I sensed, the actual passage was not going to be unanimous if it passed at all. With my motion, I wanted to get all the questions answered and be able to support it."

Carroll said he had concerns about the lease extension, saying the additional years would exceed the terms of many county judges and justices of the peace across the coming years and that those individuals would be helpless to change the arrangement being put in place now between the county and the hospital.

He also said the location of the new hospital in White Hall added to a perception that entities were leaving Pine Bluff and locating elsewhere.

"There's a segment of this community that feels that we take way too much away from Pine Bluff and give it to White Hall," he said.

Carroll said his goal was not to stop the project.

"I don't want to be labeled as someone who stands in the way of progress," he said. "But people have questions, and they have not had a chance to voice them."

Robinson countered Carroll's contention that there had not been enough time to debate the measure, adding that there were several hospital representatives at the committee meeting last week who were available to answer questions.

"That's why we have these committee meetings," he said. "That's where all of the questions are answered, even if it takes three hours."

Asked why he thought six justices of the peace had voted against the lease extension proposal, Robinson said comments from Carroll had "diluted the purpose of the proposal and added to the confusion."

"I don't think they absolutely understood what was going on," Robinson said.

The 85,000-square-foot Jefferson County Specialty Hospital would be built on the existing property of the White Hall Health Complex on West Holland Avenue. Plans for the facility call for 40 inpatient rehabilitation beds and 36 inpatient behavioral health beds, an increase from 27 rehab and 18 health beds at Jefferson Regional's original Pine Bluff campus on 40th Avenue.

"The rehab and psych beds are important not only for the community but the entire region," he said. "We are way under horsepower for those necessary beds, and we don't have any more space in our facility. So this is a logical choice."

Thomas said he thought he and the other hospital representatives had answered all of the questions about the project but said he stands ready to answer more.

"I felt that we were there and had addressed all of the concerns, and afterward, I didn't get any phone calls," Thomas said. "But if they've got concerns, then we're happy to do that and will be available to meet at any time with the Quorum Court members. That's perfectly fine. We still have some due diligence to perform so there is no problem with time."

Thomas said if the justices of the peace chose not to extend the lease to the developer, a "path B" would be to sell the property outright to the company but that he'd rather not go that route.

"The better plan for the hospital and the county is the long-term lease," Thomas said. "I still feel good about it. It's going to get worked out."

Robinson said he would change the wording of the proposal so that it was clear that the measure was a resolution. He said he would also consult with attorneys to determine whether he needed to resubmit the proposal to the committee before it could come up for another vote. Additionally, Robinson said he may call a special meeting of the Quorum Court to address the matter before the next regularly scheduled meeting in July.