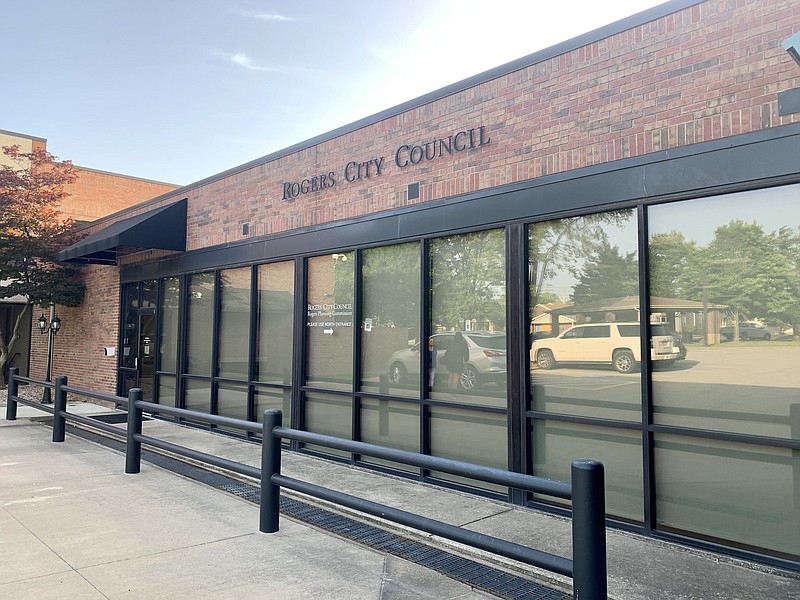 The outside of the City Council chambers is seen Tuesday at Rogers City Hall. (Garrett Moore/NWA Democrat-Gazette)

ROGERS -- The City Council approved a pay raise for city employees, a contract with a city planning firm and funds for the construction of two new roundabouts on First Street.

The council unanimously passed a resolution at its meeting Tuesday night that will increase the base pay of each permanent, full-time employee by 75 cents per hour, or $1,560 annually.

The amount will be prorated to permanent, part-time employees based on annual hours worked, according to the resolution. The changes will go into effect June 26.

Thomas Dunlap, director of human resources, said there is pressure for pay increases due to inflation and increased cost of living as well as recruiting challenges.

It has become difficult for the city to recruit for entry-level positions, whether in skilled labor, clerical work or customer service jobs, Dunlap said.

Recent postings for deputy court clerk positions were open for over two months before any candidates applied, he said.

Across all city employees, the raise will add up to a 3.6% average salary increase, he said.

A consultant recommended the city adopt a 75-cent-per-hour increase based on what other cities and private employers are paying in similar positions across the region, he said.

The consultant also recommended an additional minimum increase around 25 cents per hour by next year, according to Dunlap.

"This is kind of an incremental step to get us where we need to be by January," he said. "The work is not done. We'll continue to analyze this."

Funds from the city's general reserves, street reserves and airport fund reserves totaling $590,762 will be used for the pay increase, according to the resolution.

Council members voted 7-0 in support of the resolution. Gary Townzen was absent.

The council also unanimously agreed to hire a firm in Portland, Ore., for consultation on municipal planning, urban design and land regulation efforts in the city.

DPZ CoDesign will be the primary consultant in updating the city's development code in addition to supporting comprehensive growth map updates by planning firm Garver, which is already in a contract with the city, according to John McCurdy, city development director.

Up to $443,510 will be spent in hiring the firm, according to the resolution.

"We've looked at every firm the country that does this type of work, and I believe that DPZ is the best out there," McCurdy said.

DPZ has completed over 300 projects across the country, from individual buildings to regional plans and zoning codes, including locations like the beachside town of Seaside, Fla., and the Legacy Town Center in Plano, Tex., according to its website.

The firm has offices in Portland, Miami, Washington, D.C., and Puerto Rico.

The council voted 7-0 to approve the contract with DPZ.

In other business, the city will use federal surface transportation block grant funds to create roundabouts on the east side of town at the intersections of First Street and New Hope Road and First Street and Pleasant Grove Road.

"This is a part of our economic development strategy to make access to downtown Rogers easier for cities to the south and eventually, also for the uptown area," McCurdy said.

Eighty percent of the funds will be provided by the federal government and 20% will be matched by the city, according to the resolution passed Tuesday night.

Council members voted unanimously in favor of the resolution.

The council also approved a rezoning request for a grocery-centered mixed-use development by the firm that developed Fayetteville's Whole Foods Market.

The council unanimously approved a request to rezone 12.25 acres at the northwest corner of New Hope Road and Promenade Boulevard, moving the property, a part of the Pinnacle Springs commercial subdivision, from the highway commercial zoning district to the uptown commercial mixed-use zoning district.

A representative of Atlanta, Ga.-based firm SJC Ventures said in an email last week the project will be a "grocery anchored mixed use center." They also said they could not yet confirm the grocery tenant. 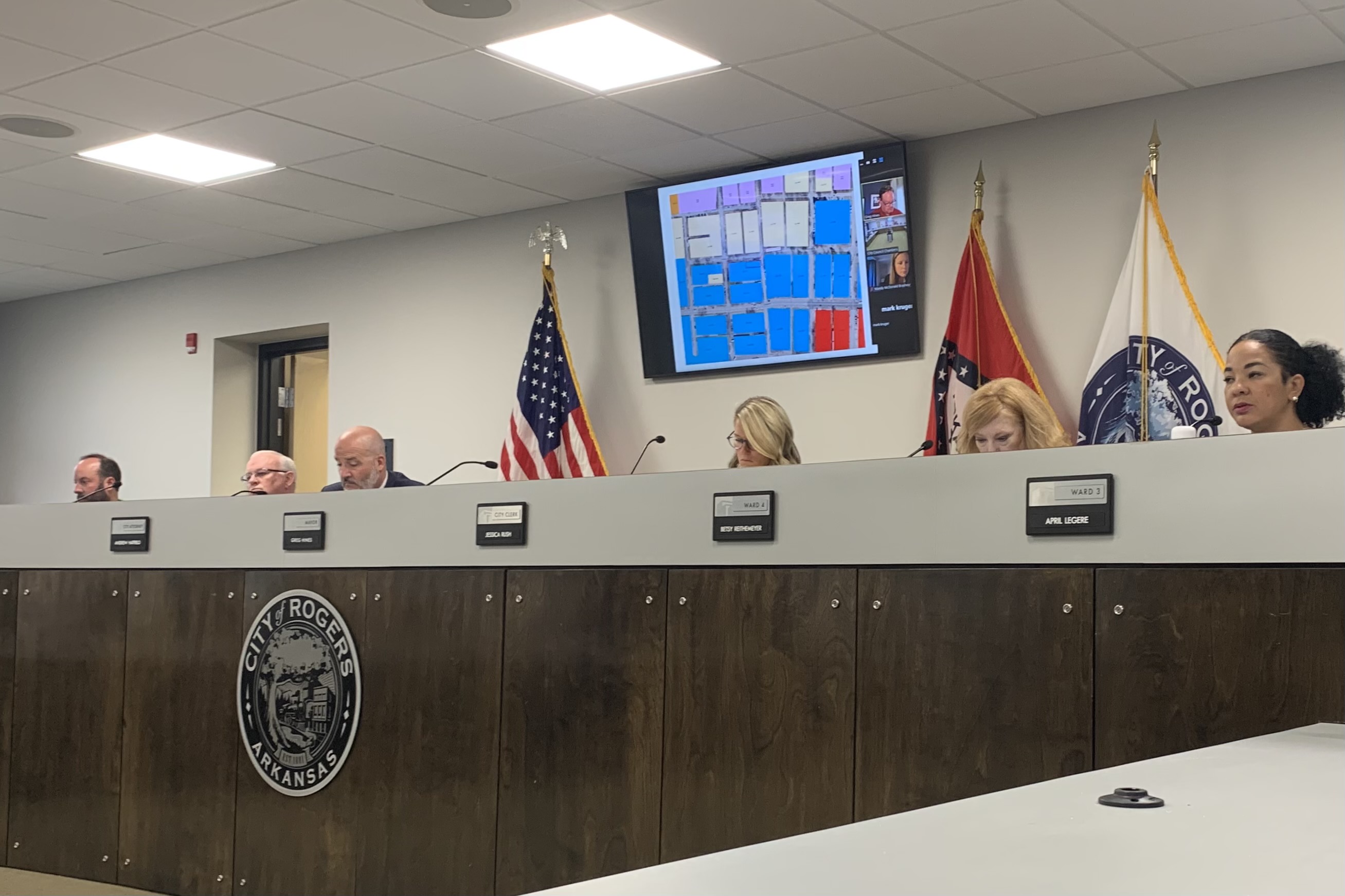 City council members vote to approve a resolution Tuesday night that will increase the base pay of each permanent, full-time city employee 75 cents per hour, or $1,560 annually. (Garrett Moore/NWA Democrat-Gazette)
More News

• A resolution to appropriate $33,000 toward maintenance and repairs of the city’s Osage Creek trail.

• The sale of two city-owned trucks by internet auction or other available means.

• The disposal of certain damaged and unusable city-owned trailers to be recycled.

• A request by Hickman Trust to rezone 0.66 acres at 1624 S. Dixieland Road from the agricultural zoning district to the residential single-family zoning district.

• A request by Kenneth Curry to rezone 0.15 acres at 124 N. Fifth St. from the commercial mixed-use zoning district to the neighborhood transition zoning district.