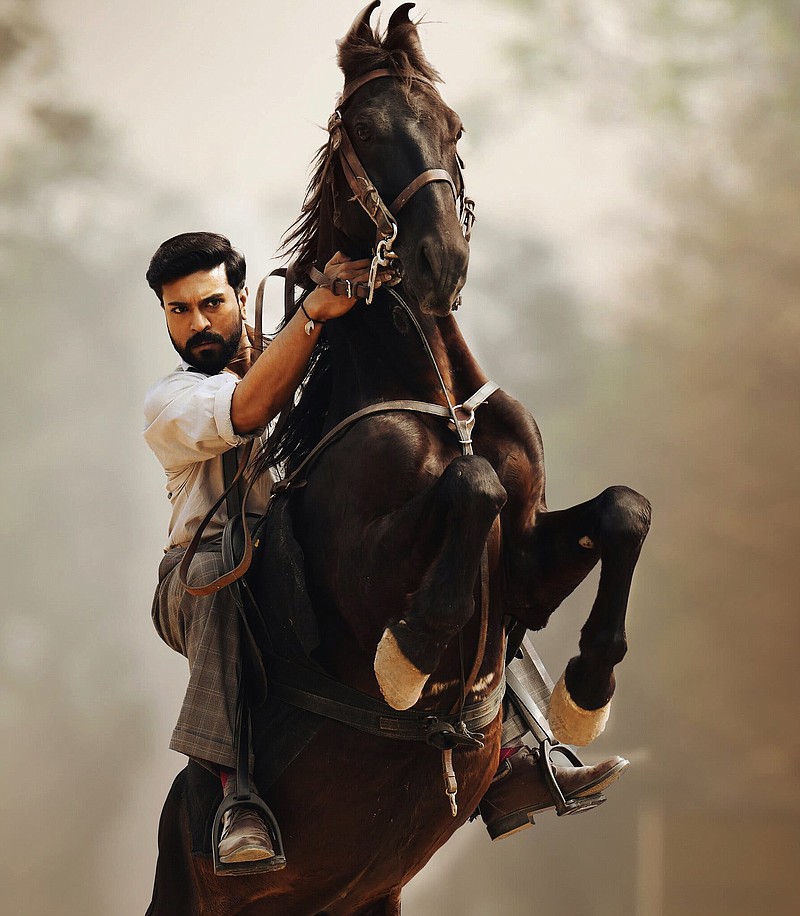 Historically, Alluri Sitarama Raju (Ram Charan) was an Indian revolutionary who waged an armed campaign against British colonial rule in India. In the Bollywood blockbuster “RRR,” he’s an all-singing/all-dancing superhero.

Perhaps you've heard of the phenomenon that is "RRR." In addition to being the most expensive Indian movie to date and setting several worldwide box office records, the Telugu-language action-drama has won the praise of critics and audiences from around the globe. A three-hour epic set in 1920 pre-independent India may not sound like the kind of blockbuster today's crowds are groomed to enjoy. But this is no ordinary blockbuster. "RRR" may anchor itself in rich history, but its very much a work of wild, unbridled fiction. And the sheer audacity of what we see on screen is cinema excess at its very best.

"RRR" has recently made several stops at American theaters (including Little Rock) and is now available to stream on Netflix. And while the small screen may not be the ideal venue for such a boisterous bonanza of visual pomp and flair, it's absolutely worth the 187-minute investment.

Directed and co-written by S.S. Rajamouli, the rollicking "RRR" is nearly impossible to define. It starts ferociously, turns lighthearted, plays like a comedy one minute and hits you with a musical number the next. The style-heavy action can be as brutal as it is proudly over-the-top. Yet there are also moments of silliness, heartbreak and romance. It's a buddy movie, a celebration of culture, a searing critique of colonialism, an ode to big screen spectacle. You could even call it a superhero movie of the most unconventional kind.

That all may sound overwhelming, and if it makes you a little hesitant, don't be. Yes, there are many moving parts and even more genre influences. But Rajamouli harnesses it all into one mind-blowing stew that may defy definition, but that also reminds us of how movies can sweep us away in ways we never expect.

"RRR" (which we later learn stands for "Rise Roar Revolt") revolves around two men who start as enemies, become friends, turn back to enemies, etc. The characters are based on two real-life revolutionaries. Komaram Bheem (played N.T. Rama Rao Jr.) was a Gond tribe freedom fighter who helped lead a rebellion against the British Raj. Similarly, Alluri Sitarama Raju (played by Ram Charan) led armed guerrilla campaigns against the British. There's no evidence the two revolutionary leaders ever met in real life. But Rajamouli tosses aside any notion of historical restraints and imagines a fascinating "what-if" scenario.

The movie's opening wastes no time setting up its villain(s) and its oppressive setting. Deep in the Adilabad forest, the cruel British Governor Scott Buxton (Ray Stevenson) and his equally vile wife, Catherine (Alison Doody), claim for their entitled selves a young girl named Malli (Twinkle Sharma) belonging to a quiet off-the-grid Gond tribe. The reverberations of that abhorrent act can be felt through the entirety of the hefty running time.

From there we get introductions to the two main characters and they give us a good sense of the kind of movie Rajamouli is shooting for. On the outskirts of Delhi, Raju (Ram Charan), a loyal soldier in the British army, single-handedly quells a massive uprising of angry locals with nothing more than a wooden baton. Back in the forest, Bheem, from the above-mentioned Gond tribe, displays his own superhuman prowess in a one-on-one with a man-eating tiger.

The paths of both men inevitably cross after Bheem is sent by his tribe to rescue Malli. But first he'll need to find her. He begins his hunt in Delhi, masquerading as a local mechanic named Akhtar. The Governor gets word that a warrior is coming from the village, but they have no idea of his identity. Raju accepts the task of identifying and apprehending Bheem. If he brings him in alive, he'll receive his much coveted promotion to special officer.

The first big twist follows a chance meeting where Bheem and Raju join up to save a young boy's life. The two end up developing a close friendship, with neither realizing the other's true identity. Their male bonding takes the story in some comical directions while a budding romance between Bheem and a kind-hearted Brit named Jennifer (Olivia Morris) leads to a gloriously absurd and completely out-of-the-blue song-and-dance number (welcome to Bollywood).

But secretly Bheem and Raju continue their individual missions, leading to an inevitable clash once their identities are fully revealed. And all of that happens in the first half of the film. The second half isn't as playful. It's darker and bloodier, yet still maintains its bombast and over-the-top verve. The action scenes (shot by cinematographer Senthil Kumar) only get wilder and are infused with mind-blowing choreography and top-notch CGI. And while the movie (to its credit) never loses sight of its two main characters, most people will leave the film talking about its outrageously fun set-pieces.

When taken all together, "RRR" plays like a rich and often pointed fable. It has an infectious charm in large part thanks to the bigger-than-life performances from Charan and Rao, two of Bollywood's biggest stars. Themes of fate, friendship, loyalty and betrayal are entwined with a sharp-edged dissection of colonialism and the oppression that follows in its wake. But what amazes most is the movie's ability to be heavy and light, funny and serious, utterly ridiculous and surprisingly thought-provoking. And Rajamouli's ability to make it all gel is as superhuman as anything his two lead characters pull.