Kids under 5 get FDA nod for virus shot

Review by CDC next for Pfizer, Moderna vaccines by Compiled by Democrat-Gazette Staff From Wire Reports | June 18, 2022 at 4:44 a.m. 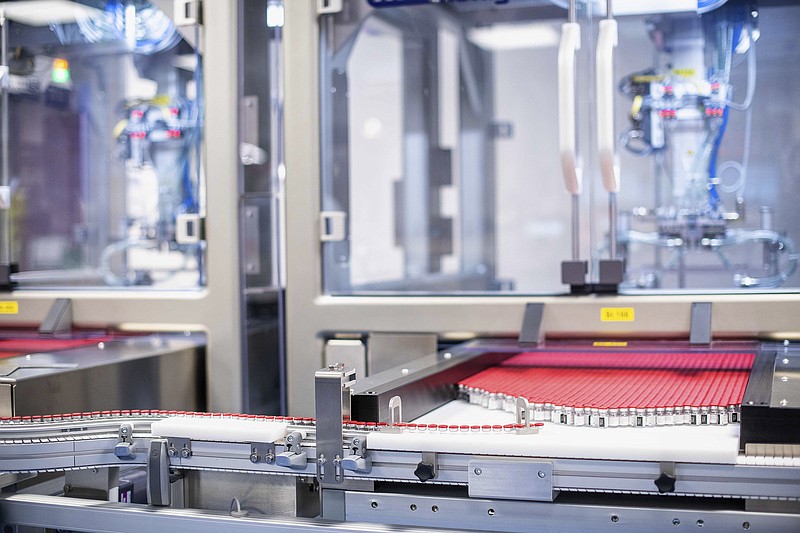 This photo provided by Pfizer shows the production of Pfizer’s covid-19 vaccine for children last month in Puurs, Belgium. (AP/Pfizer)

U.S. regulators on Friday authorized the first covid-19 shots for infants and preschoolers, paving the way for vaccinations to begin next week.

The Food and Drug Administration's action follows its advisory panel's unanimous recommendation for the shots from Moderna and Pfizer. That means U.S. kids under 5 -- roughly 18 million youngsters -- are eligible for the shots.

The nation's vaccination campaign began about 1½ years ago with older adults, the hardest hit during the coronavirus pandemic.

There's one step left: The Centers for Disease Control and Prevention recommends how to use vaccines.

Its independent advisers began debating the two-dose Moderna and three-dose Pfizer vaccines on Friday and will make its recommendation today. A final signoff is expected soon after from CDC Director Dr. Rochelle Walensky.

At a Senate hearing Thursday, Walensky said her staff was working over the Juneteenth federal holiday weekend "because we understand the urgency of this for American parents."

She said pediatric deaths from covid-19 have been higher than what is generally seen from the flu each year.

"So I actually think we need to protect young children, as well as protect everyone with the vaccine and especially protect elders," she said.

The FDA also authorized Moderna's vaccines for school-age children and teens. The CDC's review is next week. Pfizer's shots had been the only option for those age groups.

For weeks, the Biden administration has been preparing to roll out the vaccines for little kids, with states, tribes, community health centers and pharmacies preordering millions of doses.

With the FDA's emergency use authorization, manufacturers can begin shipping vaccine across the country. The shots are expected to start early next week but it's not clear how popular they will be.

Without protection for their younger children, some families had put off birthday parties, vacations and visits with grandparents.

"Today is a day of huge relief for parents and families across America," President Joe Biden said in a statement.

While young children generally don't get as sick from covid-19 as older children and adults, their hospitalizations surged during the omicron wave and FDA's advisers determined that benefits from vaccination outweighed the minimal risks. Studies from Moderna and Pfizer showed side effects, including fever and fatigue, were mostly minor.

"At the end of the day, our goal is very clear: We want to get as many kids vaccinated as possible," Jha told The Associated Press.

In testing, the littlest children developed high levels of virus-fighting antibodies, comparable to what is seen in young adults, the FDA said. Moderna's vaccine was about 40% to 50% effective at preventing infections but there were too few cases during Pfizer's study to give a reliable, exact estimate of effectiveness, the agency said.

"Both of these vaccines have been authorized with science and safety at the forefront of our minds," Dr. Peter Marks, the FDA's vaccine chief, said at a news briefing.

Marks said parents should feel comfortable with either vaccine, and should get their kids vaccinated as soon as possible, rather than waiting until fall, when a different virus variant might be circulating. He said adjustments in the vaccines would be made to account for that.

"Whatever vaccine your health care provider, pediatrician has, that's what I would give my child," Marks said.

The two brands use the same technology but there are differences.

Pfizer's vaccine for kids younger than 5 is one-tenth of the adult dose. Three shots are needed: the first two given three weeks apart and the last at least two months later.

Moderna's is two shots, each a quarter of its adult dose, given about four weeks apart for kids under 6. The FDA also authorized a third dose, at least a month after the second shot, for children who have immune conditions that make them more vulnerable to serious illness.

Both vaccines are for children as young as 6 months. Moderna next plans to study its shots for babies as young as 3 months. Pfizer has not finalized plans for shots in younger infants. A dozen countries, including China, already vaccinate kids under 5 with other brands.

Immediately upon hearing of the FDA's decision, Dr. Toma Omofoye, a Houston radiologist, made appointments for her 4-year-old daughter and 3-year-old son.

Without the shots, her family has missed out on family gatherings, indoor concerts, even trips to the grocery store, she said. During a recent pharmacy stop, Omofoye said her daughter stared and walked around like it was Disneyland, and thanked her.

"My heart broke in that moment, which is why my heart is so elated now," Omofoye said.

By some estimates, three-quarters of all U.S. children have already been infected. And only about 30% of children ages 5 to 11 have gotten vaccinated since Pfizer's shots opened to them last November.

The FDA officials acknowledged those low rates and said the government is committed to getting more older kids vaccinated and having better success with younger kids.

"It's a real tragedy, when you have something free with so few side effects that prevents deaths and hospitalization," said FDA Commissioner Robert Califf.

Dr. Beth Ebel of the University of Washington School of Medicine in Seattle, said the tot-sized vaccines would be especially welcomed by parents with children in day care where outbreaks can sideline parents from jobs, adding to financial strain.

Uptake could be low, which would be particularly worrisome for children with underlying conditions that might make them more vulnerable to being hospitalized with the virus.

Both Pfizer's and Moderna's studies showed that the omicron variant of the virus greatly dulled the power of the vaccines to prevent symptomatic infection in young children, just as it did for adults.

Cori Darr, of Riverside, Mo., said early Friday that she would seek the vaccine immediately for her daughter, who will turn 5 in November.

"I was starting to think that she would age into a vaccine before anyone bothered to approve one," she wrote in an email.

But Darr said so far she is having trouble figuring out where to go. She said neither her pediatrician's office nor her local health department plans to offer the shot, and the vaccine clinic at her local children's hospital has closed.

Federal officials have said that states typically gradually increase orders as vaccination campaigns evolve. But less than 40% of children ages 5 to 11 have received at least one dose of a coronavirus vaccine, a sign that families, including those whose adult members were eagerly vaccinated, might be hesitant to inoculate their children, at least right away.

Dr. Erin Rose Medina, of Spokane, Wash., said she prefers Moderna for her 3-year-old son because she thinks the data suggests it may be more effective.

"Another reason to go with Moderna -- faster to get to fully vaccinated status," she wrote in an email. But she added: "If only Pfizer is available we won't wait for Moderna."

Some pediatric and vaccine experts have said that it is extremely hard to try to compare the two vaccines, in particular on the question of which is more effective.

"I don't think there is convincing enough data to say one is better than the other," said Dr. Kristin Moffitt, a physician at Boston Children's Hospital who has treated young covid-19 patients. "We all need to acknowledge that to compare the two head to head is very tricky, given that they were studied differently."

Dr. James Conway, a pediatric infectious-disease expert at the University of Wisconsin-Madison, said it was hard to pinpoint how much protection either vaccine might provide given that newer, more contagious versions of the virus are now circulating.

Pfizer's efficacy estimate, Moffitt said, was particularly unreliable because there were so few cases of the virus among trial participants after the third dose.

But given that Pfizer-BioNTech's vaccine has been authorized for children 5 and older for many months, Moffitt said some parents might feel more comfortable with that vaccine.

Some pediatricians, nurses and pharmacists might be more familiar with that vaccine and not want to introduce another product.

Information for this article was contributed by Lindsey Tanner, Laura Ungar, Carla K. Johnson and Zeke Miller of The Associated Press and by Sharon LaFraniere and Noah Weiland of The New York Times. 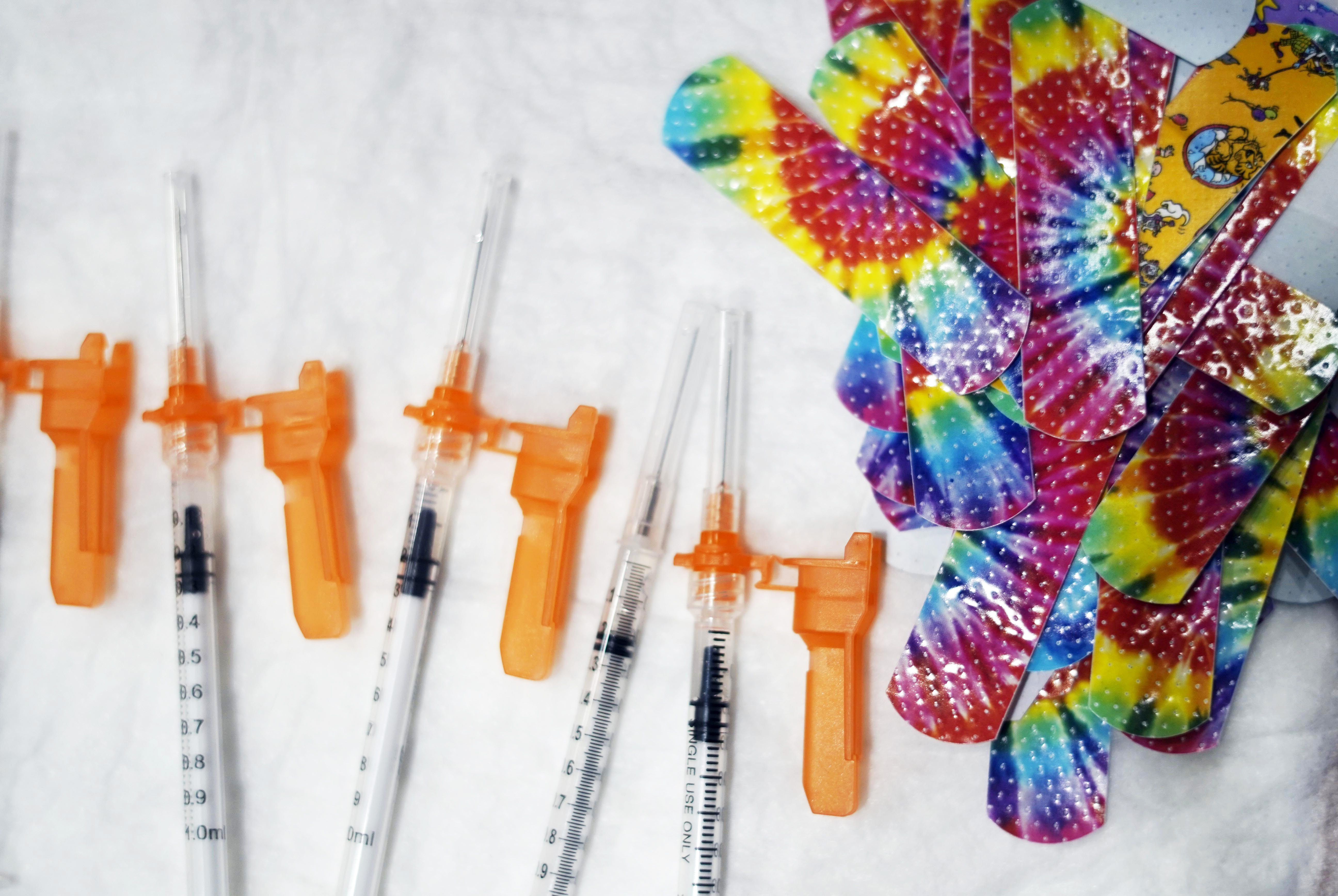 FILE - Syringes and colorful bandages are prepared as children from local schools prepare to get COVID-19 vaccines in Pittsfield, Mass., on Monday Dec. 13, 2021. (Ben Garver/The Berkshire Eagle via AP, File) 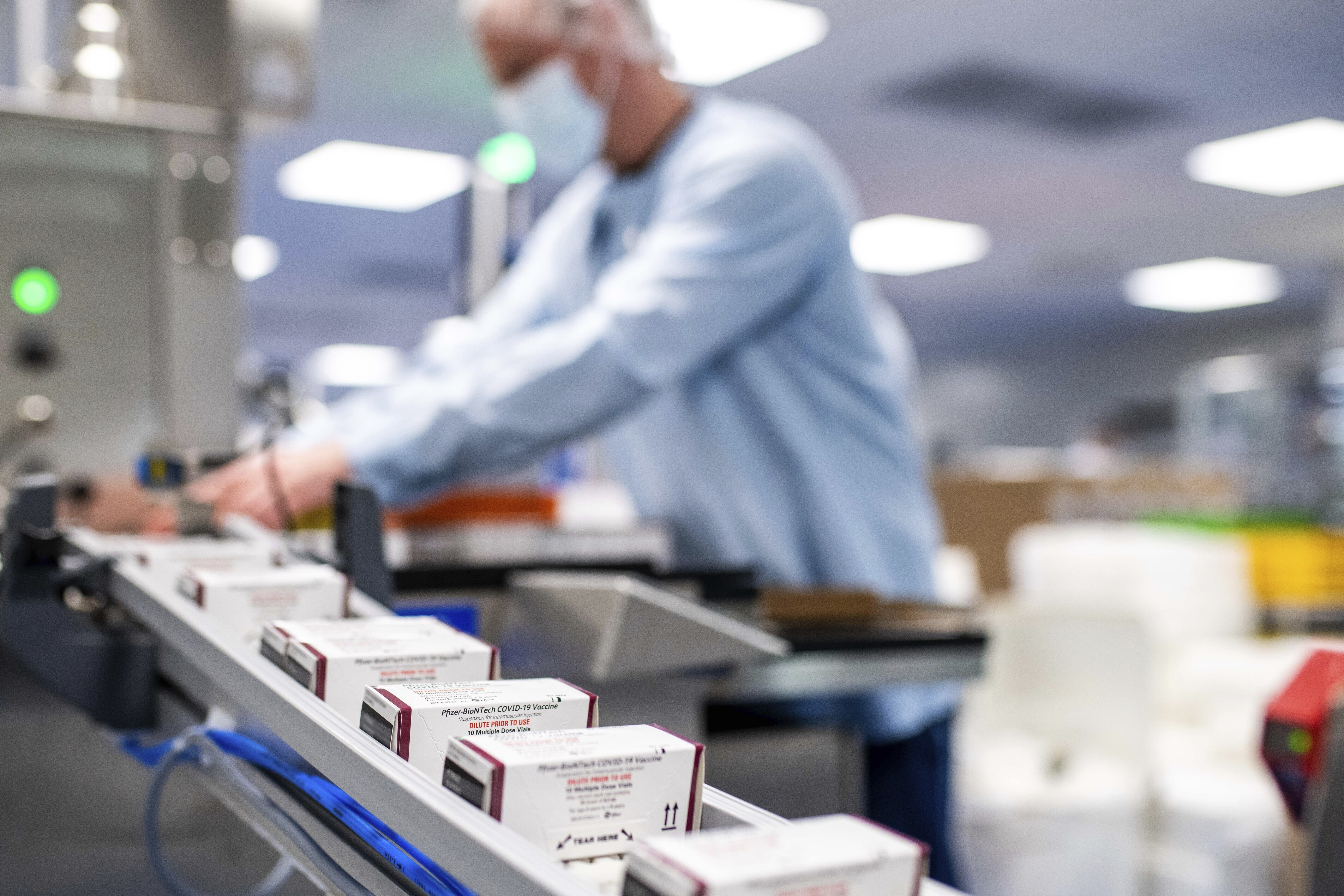 This May 2022 photo provided by Pfizer shows production of the Pfizer's COVID-19 vaccine for children under 5 in Puurs, Belgium. U.S. regulators on Friday, June 17, authorized the first COVID-19 shots for infants and preschoolers, paving the way for vaccinations to begin next week. (Pfizer via AP) 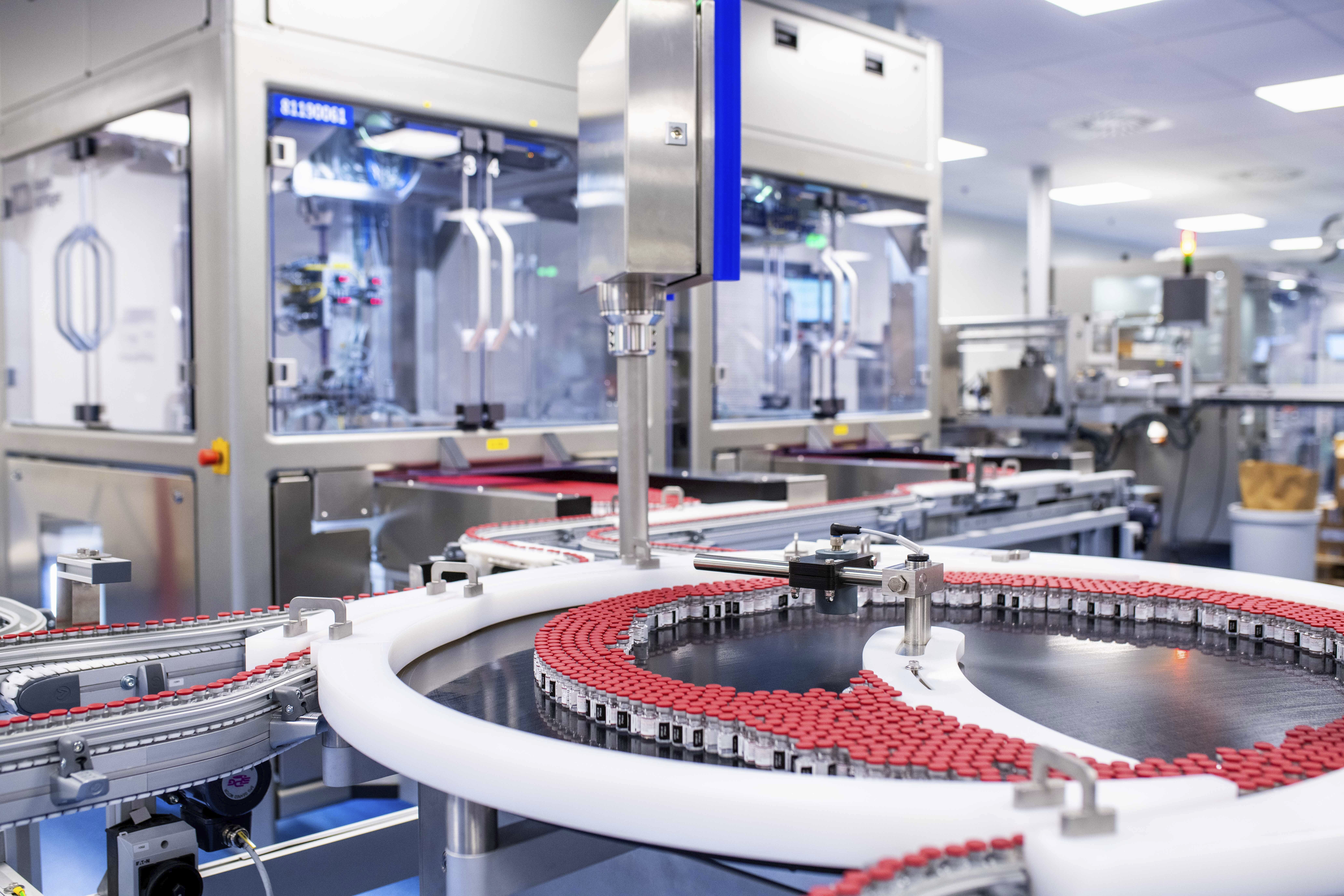 This photo provided by Pfizer shows the production of Pfizer's COVID-19 vaccine for children under 5 on May 2022 in Puurs, Belgium. U.S. regulators on Friday, June 17, authorized the first COVID-19 shots for infants and preschoolers, paving the way for vaccinations to begin next week.(Pfizer via AP)

Print Headline: Kids under 5 get FDA nod for virus shot