Arkansas' May unemployment steady at 3.2% 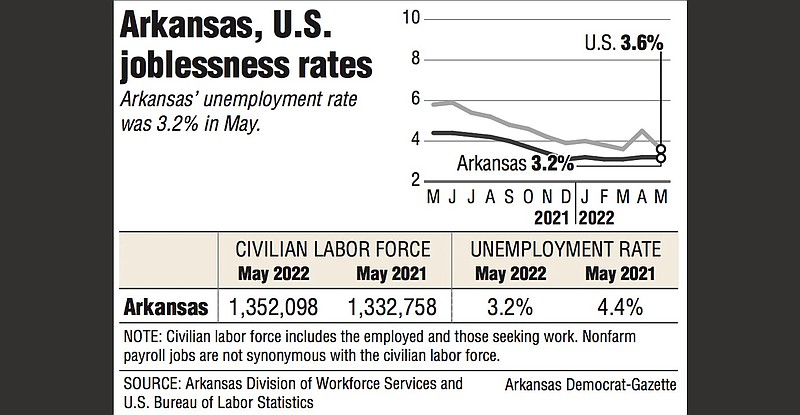 Graphs and information about the Arkansas and U.S. joblessness rates.

Arkansas officials reported Friday that May's unemployment rate remained unchanged at 3.2%, following a national trend of standing firm from April. At 3.6%, the overall U.S. jobless rate also was stable between April and May.

The state's labor force continued to grow in May, adding 2,545 Arkansans looking for jobs. The Arkansas Division of Workforce Services reported Friday that there were 2,367 more employed Arkansans last month and 178 additional unemployed.

Continued improvements in the labor force are a positive signal, Commerce Secretary Mike Preston said. "There was a modest amount of growth and it's trending in the right direction," he said. "Given the unstable nature of the economy right now, it's good to have some stability in the labor pool. That's good because going forward, with a looming recession, we don't know how long those numbers will continue to be positive."

Arkansas registered job gains in six industry sectors as non-farm payroll jobs set a record high number of employed at 1.31 million, up 1,300 jobs in May. Leisure and hospitality increased by 1,500 jobs, tops in the state. Financial services along with professional and business services each gained 1,100 jobs.

The retail trade sector dropped 1,600 jobs while health care and social assistance fell by 1,600 as well.

"There's not a whole lot of action going on with the unemployment side of things," Michael Pakko, chief economist for the state at the Arkansas Economic Development Institute, said Friday. "We're kind of stuck at very low levels and we're seeing the slow ramping up of participation in the labor force on that side of the ledger."

Heading into the back half of the year, rising interest rates hold the biggest concern for unemployment, which has held steady at below 3.5% since September. The Federal Reserve raised interest rates .75% this week and forecasters are predicting a similar increase again in July. Higher interest rates are a tool to tame inflation by slowing consumer demand, which in turn could dampen production and reduce jobs.

"It will be interesting to see how it plays out in the state because not only do we have a low unemployment rate but we have a high number of open jobs," Preston said, estimating there are about 50,000 open positions across Arkansas. "That number could decline if businesses slow down on hiring."

Likewise, Pakko said interest rate increases continuing into next year "are likely to slow the economic expansion nationwide and Arkansas is no exception to that."

National forecasts predict the U.S. unemployment rate will rise above 4% following interest-rate bumps. "I wouldn't be surprised to see the same thing happen in Arkansas," Pakko said. "That's likely to be on the horizon later this year and into next year."

The Fed said its goal in pumping up interest rates is to reduce inflation, which has been running at a 40-year high of above 8%, compared to the 2% rate that was common before the pandemic.

Year-over-year, there were 34,671 more Arkansans employed last month than in May 2021. The trade, transportation and utilities sector posted the largest gain, adding 12,500 jobs; manufacturing gained 7,500 jobs over the year; and leisure and hospitality added 7,200 workers.

Of the major economic sector, only educational and health services recorded a year-over-year loss, falling by 400 jobs.

Print Headline: May unemployment steady at 3.2%