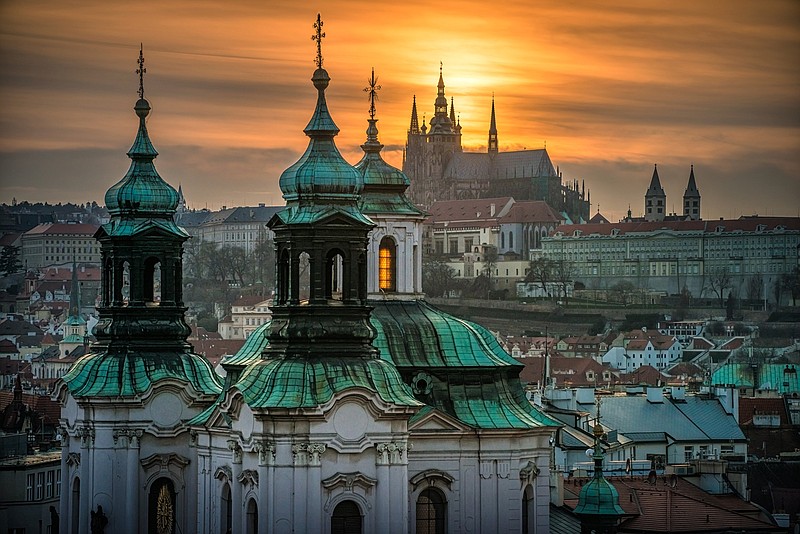 Prague has been called the City of a Hundred Spires, and among the most venerable are the ones perched atop Prague Castle and St. Vitus Cathedral. The Prague Castle complex covers 110 acres in the heart of the capital city of the Czech Republic. (TNS/Prague City Tourism)

If there is such a thing, I'm a church tourist. When I travel, I revel in visiting churches, and — when I can, and even if I don't understand the language — attending services. Certainly I don't travel to see only churches, but the mere act of being an occasional church tourist has led me to visit spectacular cathedrals around the world, including the glittering gold-leafed ornateness of Iglesia de la Compania de Jesus in Quito, the stained-glass majesty of Cathedral Basilica of St. John the Baptist in Savannah and Normandy's Notre-Dame Cathedral of Rouen, whose beauty inspired several paintings by Claude Monet. Among the most memorable, the most truly impressive, is St. Vitus, wrapped within the walls of Prague Castle, in the capital city of Prague in the Czech Republic.

On a cold, gray and rainy Sunday morning, my friend and I, traveling to Prague on a small group tour, made our way into St. Vitus. While my friend is Catholic and at least understood some of the customs of the services, I, a Southern Baptist by faith, mainly followed her lead and stood up, kneeled and sat on her cue. Neither of us knew a word of Czech, but it didn't seem to matter, as I was so enraptured by the magnificence of the church that I silently cried throughout the service.

It took some 600 years, from 1344 until 1929, to complete the impossibly beautiful cathedral of jewel-tone stained-glass windows, mosaics, frescoes, wooden pews, incredible artistic treasures including Bohemian lions, a series of small chapels set among its cavernous sanctuary, and a choir of statues and sculptures of saints. Every corner of the sanctuary sparkled with color.

On a continent of historic and gorgeous Old World cities, Prague, in the heart of central Europe, feels medieval, in the vein of a fairy-tale romance, and is nearly perfectly preserved since its beginnings in the ninth century. Undoubtedly, its core is its spellbinding architecture, from its labyrinth of cobblestone streets to its myriad churches and cathedrals with their towers and steeples to its arches and bell towers and turrets, all set among a huge mishmash of Romanesque, Gothic, Renaissance, Baroque and Rococo styles. Prague is called the City of a Hundred Spires, all hundred of them jutting in harmonious unison to the heavens, just as they did in centuries past.

For good reason, Prague Castle is the most popular tourist attraction in the city. Founded in 880 A.D., the castle is the largest ancient castle complex in the world and is venerably perched atop the hillsides of Lesser Town and part of the Historic Center of Prague, a UNESCO World Heritage Site. Prague Castle is not a single, gigantic building, as are most castles. Instead, the castle, a masterpiece of creative genius, contains a rabbit warren of palaces and ecclesiastical outbuildings that was once the seat of the kings of Bohemia. Today, it covers about 18 acres — the entire complex including its buildings, courtyards and gardens is about 110 acres — and is the official residence of the president of the Czech Republic.

Another iconic, and picturesque, architectural tour de force is the Charles Bridge, its first bricks laid in 1357 under the patronage of Charles IV. The bridge, with its stone arches, spans the Vltava River and connects Lesser Town with Old Town. The pedestrian-only, windswept bridge offers fantastic views of Prague and is verged by a series of stunning statues of saints and crosses, some dating to the 15th and 16th centuries.

Parts of "Mission: Impossible," the 1996 movie with Tom Cruise as secret agent Ethan Hunt, were filmed on the Charles Bridge, which had to have been a Herculean task, considering that it's passaged daily — and nightly — by the footfalls of untold thousands of tourists and locals alike. Cross it today and you'll share the thoroughfare with musicians, street vendors, performers and artists hawking their crafts. It's a happy, romantic place with incredible views.

When other European cities modernized with bursts of new construction after World War II, Prague chose to cling to its past. Places like London, Berlin and Dresden felt the full brunt of the war, but Prague came away relatively unscathed, which in turn provided a plethora of extravagant, architectural gifts of Europe's past. For the traveler, this means uniquely wonderful places to explore, including the Mala Strana, the "little quarter" or Lesser Town neighborhood that sprang from ninth-century market settlements. The Charles Bridge and Prague Castle are in the Mala Strana. Other places to visit are the Wallenstein Palace Gardens with its verdancy, ponds and sculptures depicting heroic figures of Greek mythology; the Franz Kafka Museum; and the Strahov Monastery that was founded in the 12th century.

The touristy-yet-fun Old Town Square is a flurry of shops, markets, cafes and even horse-drawn beer wagons. Like the Charles Bridge, watch for lively street performers and musicians. With the first of warm weather here, winter aficionados are already thinking Christmas. Old Town Square is especially pretty during the holidays when it transforms to a gift-wrapped wonderland of old-fashioned Christmas markets and dazzling lights and decorations. The must-do is sample hot wine, piquant and warming and sold everywhere by street vendors.

Josefov, the Old Jewish Quarter, rests on tightly wound streets and cramped alleyways between Old Town and the Vltava River. It contains the remnants of Prague's former Jewish ghetto, where Jews had to settle after they were banned from living anywhere else in the city. Ensconced within Josefov are a number of synagogues and the Old Jewish Cemetery, that as a whole the Nazis once cruelly declared a "museum of an extinct race."

While Prague is nested with boutique hotels like the Augustine and Carlo IV; Art Nouveau inns including the Hotel Paris Prague and Art Nouveau Palace Hotel; and chains, among them the Radisson Blu and several Marriott properties, our group stayed at the Aria Hotel.

The Aria, located in the Mala Strana, is a small hotel dedicated to the greatest composers and performers of all time. All of the floors are devoted to a different genre of music, with each room decorated to a specific style of music or particular artist. Think: Brahms, Bernstein, Puccini, Mozart, Billie Holiday, Louis Armstrong and Bossa Nova. Rates at the unique Aria include a buffet breakfast, music library, turndown service and an iPad during your stay.

For coffee and breakfast, Praguers — yes, that's a word — like Cafe Savoy, Cafe Imperial or Kavarna Prazirna. Lunch is anywhere in Old Town Square, but if the weather is nice, ask for a table outdoors. For dinner, try the Lvi Dvur for its sumptuous roasted pig or the Coda Restaurant at the Aria Hotel where I had the spinach gnocchi with ricotta, asparagus and sheep cheese. At Kampa Park, where our group dined for our farewell dinner, my olive oil-poached halibut was exquisite, the Czech sauvignon blanc citrusy and bold, the chocolaty fondant dessert of Millot Valrhona decadent.

Standing just at dusk on the Charles Bridge, with the sun softening into golden strands and lighting Prague Castle ethereally, I think of how beautiful the city is and how fortunate we are that the more the world changes, the more Prague stays the same.

Prague's streets are narrow and cobbled, so good walking shoes are a must. While Czech is the official language, most locals have at least a basic knowledge of English.

For more information on what to see and do, where to stay and what to eat, visit Prague City Tourism at prague.eu. Visit the Aria Hotel at ariahotel.net.