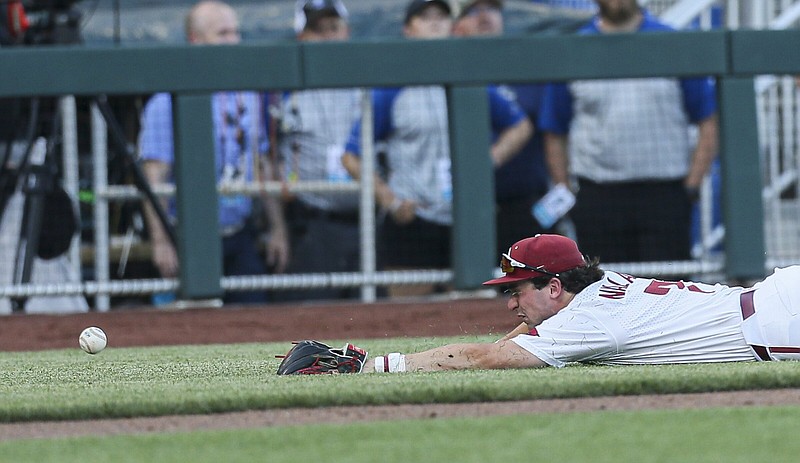 OMAHA, Neb. -- The University of Arkansas struggled to find a pitcher who could contain hot-hitting Ole Miss in a big winner's bracket game on Monday night at the College World Series.

The Rebels jumped on Razorbacks starter Zack Morris for two runs in the first inning, then unloaded on a succession of arms, including Evan Taylor, Kole Ramage and Jaxson Wiggins, to pile up runs in what became a 13-5 loss before a crowd of 25,246 at Schwab Field.

Ole Miss (39-22), the only 3 seed who made it to Omaha and the only team in the NCAA Tournament which has not lost a game, moved into the driver's seat in Bracket 2. The Rebels, who rode a strong 100-pitch outing from freshman Hunter Elliott, will have today off before resuming action on Wednesday.

"We were terrific tonight," Ole Miss Coach Mike Bianco said. "Just really played well. Hunter was just like he's pitched the second half of the season. Not to take anything away from Arkansas, but he shouldn't have given up a run today."

The Razorbacks (44-20) will take on Auburn at 6 p.m. today in an elimination game. The winner will have to beat Ole Miss twice to reached the CWS finals.

"They played better than us and we need to move on," Arkansas Coach Dave Van Horn said he told the team. "You can't look at the big picture. You have to figure out how to play well tomorrow.

"Got to play well tomorrow. Got to win tomorrow and have a chance to play the next day. That's our focus, just move on and get to tomorrow night's game."

Ole Miss squared its season series with Arkansas at 2-2 and improved to 7-0 in the NCAA Tournament while the Razorbacks fell to 6-2.

The left-hander Elliott (5-3) survived a shaky start to provide 6 1/3 innings and further protect a Rebels' bullpen that has worked just four innings through two games in Omaha.

Nine-hole hitter Calvin Harris had three extra-base hits for Ole Miss, including a two-run homer and a two-run double after entering the game with seven hits for extra bases. Leadoff man Justin Bench went 4 for 6 with 4 runs scored and 2 RBI.

Elliott gave up 3 runs, 1 of them earned, on 6 hits and 2 walks while striking out 4 in his matchup against the fellow lefty Morris (6-1), who suffered his first loss and did not get out of the first inning.

"He was mixing well and throwing a lot of strikes," Arkansas' Braydon Webb said. "We hit some balls hard, just right at them. And their defense made some plays and allowed him to go farther in the game."

Morris gave up a leadoff single to Bench on an 0-2 pitch but had a chance to escape the first after consecutive ground ball outs sent Bench to third. However, Kevin Graham laced an RBI single to right field to give the Rebels an early lead. Morris walked Kemp Alderman and hit Peyton Chatagnier with a pitch to load the bases. He was done after he walked Hayden Dunhurst to force in a second run.

"Zack didn't get out of the first inning," Van Horn said. "Walked a couple. Gave up an 0-2 count single to the lead-off man. That was kind of the beginning of it. And we just didn't pitch very well."

Graham lost Michael Turner's fly ball in the sun and the hit fell for a double to score Webb, who opened the inning with a single, and cut Arkansas' deficit to 2-1 in the first.

Tim Elko hit a 416-foot two-run homer off Taylor that had a 109-mile exit velocity in the second inning to highlight the Rebels' assault.

"Offensively we were really, really good," Bianco said. "So many guys had huge days. Of course, Calvin and Justin, but others. Elko had a huge home run, one of the longest balls I've ever seen hit here."

Arkansas got the Ole Miss bullpen stirring in the bottom of the second inning but could not lodge a knockout blow against Elliott.

"I thought he mixed well and we were very close to getting to him," Arkansas' Peyton Stovall said. "His pitch count started to get up and get high. We couldn't string a couple of hits together and didn't get that big hit."

Robert Moore reached on an error by Ole Miss shortstop Jacob Gonzalez and Jalen Battles followed with a double to the right-center gap to push Moore to third. Stovall's grounder brought in Moore, then Zack Gregory executed a squeeze bunt to perfection, plating Battles to make it 4-3.

The momentum swung right back to the Ole Miss dugout in the top of the third inning.

Ramage walked Dunhurst with one out, then Garrett Wood singled him to second base. Harris ripped a shot just inside the third base bag and into the corner to plate both runners and make it 6-3.

"We almost crawled back into it after a couple, and then they go out and get a couple more in the third," Van Horn said. "That was a little disappointing. The fifth inning, that's when the game pretty much turned: Couple of walks, couple of hits, maybe three walks, I'm not sure. But we just didn't slow them down."

Wiggins provided a small respite against the Ole Miss onslaught with a scoreless fourth inning that featured two strikeouts. But he ran into trouble in the fifth, giving up Harris' two-run home run over the right-field wall and was tagged for four runs.

The Razorbacks used seven pitchers, including Austin Ledbetter, who had not pitched since April 20. Ledbetter pitched the only three-up, three-down inning for Arkansas in the top of the ninth.

"We thought they were going to staff it, which they did," Bench said of the Hogs. "They threw a pitcher an inning there until it got out of hand.

"But, we knew what we were doing, what our scouting report was. And just go up there have tough at-bats and try and get each pitcher out of the game, which is what we did."

Webb and Battles had two hits each to lead the Arkansas offense, which managed eight hits after racking up a season-high 21 in Saturday's 17-2 win over Stanford.

The Razorbacks went scoreless for six consecutive innings before breaking through against Ole Miss closer Brandon Johnson in the ninth. Moore led off with a looping double to left field and Stovall cranked a 398-foot home run that cleared the Ole Miss bullpen in right field to set the final score.