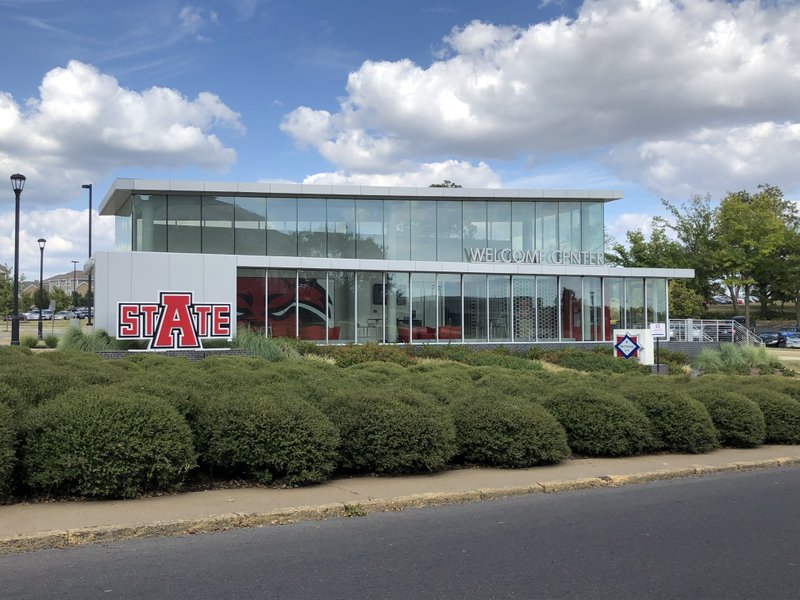 Leading a large public university means having a vision for its role in the state and region, the finalists for the top campus administrator at Arkansas State University said in cover letters vying to become the school’s next chancellor.

Four finalists for the ASU chancellor job are visiting the Jonesboro campus, with Tatum set to give the first open forum presentation today. Each finalist will also meet with students, staff and faculty members during visits that stretch over two days.

The finalists are seek-i n g to re pl a ce Ke l ly Damphousse, who is taking a job as president of Texas State University after serving as ASU chancellor since July 2017.

The finalists have all spent the large majority of their careers in higher education, and — though three would be arriving from outside Arkansas — each also has ties to the state.

Walter Kimbrough, 55, is the outgoing president of Dillard University in New Orleans. He formerly served from 2004-2012 as president of Philander Smith College in Little Rock. Both are private institutions and historically Black colleges.

Karen Petersen, 49, is dean of the Henry Kendall College of Arts & Sciences at the University of Tulsa. Petersen was born in Huntsville and her husband was born in Paragould, which is roughly 20 miles northeast of Jonesboro, she said in an email to the Arkansas Democrat-Gazette, and both have family in Arkansas.

Todd Shields, 53, has been dean since 2014 of the University of Arkansas, Fayetteville’s J. William Fulbright College of Arts and Sciences. Shields began at UA in 1994 as an assistant professor in the Department of Political Science.

Tatum, 57, has worked at Troy University since 1998, when he joined as an assistant professor of sport and fitness management. In a text message, Tatum said he was born in Brinkley in the Arkansas Delta region about 75 miles southwest of Jonesboro, with both his parents having family roots in the area. He left the state when his family moved to Pennsylvania in 1974, he said.

WORKING WITH THE COMMUNITY

In cover letters released by the ASU System to the Democrat-Gazette, candidates touched on the importance of ASU to the region while also going into detail about their own backgrounds and experience.

“Arkansas State University is in a strategically advantageous position to play a central role in the future success of Northeast Arkansas,” wrote Shields in his cover letter.

Others also wrote about the importance of a university to its surroundings.

A university like ASU “should be a welcoming place that residents want to visit,” Petersen stated in her letter.

Universities like ASU “serve as the driving force for economic development, cultural engagement, athletic opportunities, and social mobility and should seek to serve all who reside within their influence,” wrote Petersen.

Petersen referred to ASU’s planned Arts and Innovation District as “only the latest in a series of improvements at ASU” that will help the city of Jonesboro reach goals outlined in an economic development effort called Momentum Jonesboro 2.0.

“In essence, ASU is transforming Northeast Arkansas and adding value far beyond the boundaries of its campus — which is exactly what public universities should be doing,” Petersen wrote.

“I am a more than capable ambassador and communicator. I am very active in New Orleans with both the city and regional chambers and serve on two commissions appointed by the Governor of Louisiana,” Kimbrough wrote.

He also highlighted his past in Arkansas.

“Spending seven and a half years in Little Rock will be a plus in connecting and reconnecting with people in Arkansas,” Kimbrough wrote.

Tatum wrote about his experience working with elected officials in Alabama, where he stated that “maintaining and strengthening our relationship with key members in the state legislature and the Alabama Commission on Higher Education has been critical to our success.”

In describing why they want the job, some candidates in their letters talked about their own journeys in higher education.

Kimbrough emphasized the importance of being a top leader.

“Let me address the obvious. It might seem challenging for me to jump from a university of 1,200 students to one of over 13,000. I know people thought the same when Bill Clinton ran for President of the United States, an enterprise 100 times larger than Arkansas,” Kimbrough stated.

He said that when leading small institutions, “there is nowhere to hide.” “By being at a small, under resourced institution, not only do you wear many hats, but you also have an opportunity to have hands on experiences with a wide range of areas, experiences a person who leads a division of larger entities never sees until they are president,” Kimbrough stated.

In his letter, he also touted raising graduation rates to 50% at a school where about three out of every four students are eligible for Pell grants, a type of federal financial aid for students with exceptional need.

Kimbrough added that he has “a national presence as a leader in higher education,” which has included working with organizations such as the Bipartisan Policy Center think tank as well as recently giving testimony before Congress after bomb threats were made targeting historically Black colleges and universities.

Shields wrote that “since my first day as an administrator,” he has “led by example, setting high standards for myself and for those with whom I work.” Describing himself as a “positive, fair, and meticulous person,” Shields stated that he strives “to understand what motivates people.” He also wrote about fundraising, stating its importance to UA.

“Without increases in state support or tuition, we spent an enormous amount of time devoted to fundraising,” Shields wrote, going on to give a description of how he views efforts to raise money.

“Fundraising is a process that begins with building close relationships with individuals, understanding their interests, and persuasively communicating the college’s most pressing priorities, a process I find energizing and rewarding, especially when it yields new opportunities for the university,” Shields wrote.

Petersen, in her letter, described herself as a “first-generation student educated at a regional university,” where “my potential was unleashed by caring faculty and staff members just like those at Arkansas State University.” Her letter stated that she took the University of Tulsa job “to be closer to my family in Arkansas,” and that the ASU job “appeals to me both personally and professionally.” She wrote about her experience at the University of Tulsa, which in 2019 announced the elimination of some degree programs. Petersen joined the private university in February of last year.

“Honest, direct communication about the challenges we face, a genuine appreciation for the role our faculty and staff play in securing the future of the university, and a commitment to shared governance have allowed me to begin rebuilding trust quickly,” Petersen wrote.

Petersen in her letter also described herself as the “parent of a student athlete.” In an email to the Democrat-Gazette, she wrote that her son plays football at Gustavus Adolphus College in Minnesota, which competes at the NCAA Division III level. ASU sports are considered Division I, the highest level of competition.

“Athletic programs serve an important role in recruiting and fundraising because of the value they bring to the lives of participants and our community,” Petersen wrote in her cover letter.

Tatum wrote that the “servant-leader model is central to my approach to leadership,” and that his “governance style can best be described as a participatory/consultative decision-making process.” He also wrote that his academic background and interests are tied to sports, that he previously spent eight years as the faculty athletics representative for Troy University, and also that he has been “regularly asked to participate” on behalf of the university’s chancellor in meetings held by the Sun Belt athletic conference, which includes ASU as a member.

“I have the passion, energy, and experience to continue the growth and exposure of the university’s athletics program,” Tatum wrote.