Cases up as littlest begin shots; state rolls out covid-19 vaccine for kids ages 5 and younger 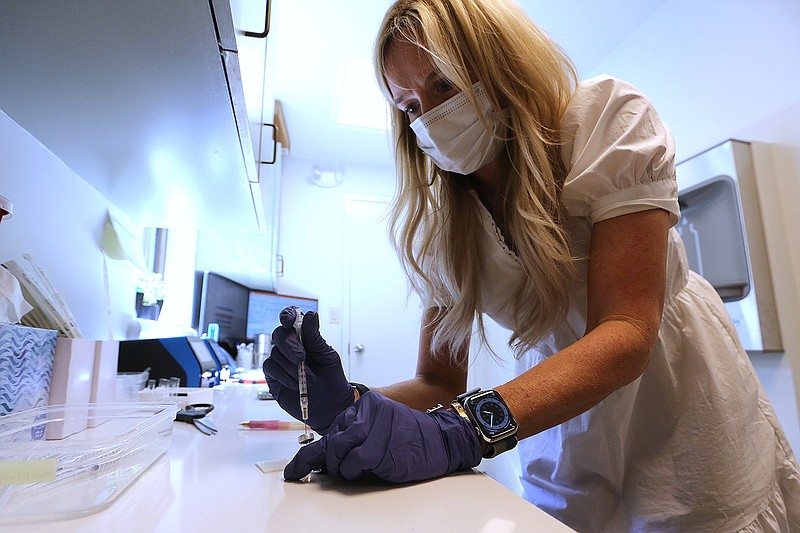 An uptick in Arkansas' new coronavirus cases resumed on Tuesday as the state continued the rollout of covid-19 vaccines for children younger than 5.

State Department of Health Director Jennifer Dillaha said all 30,000 doses in the state's initial order of vaccines for the newly eligible age group arrived in the state on Monday.

Those doses, evenly split between Pfizer and Moderna vaccines, were shipped to nine of the department's local health units.

Those units were distributing the doses to other local health units around the state as well as to private clinics and pharmacies, Dillaha said.

She said at least two shipments from the state's second order were expected on Tuesday.

The state was waiting on an expected delivery date for three other shipments.

Dillaha predicted the uptake among children would be "slow but steady."

"I think parents need some time to get the information that's newly available about the vaccines in order to make an informed decision about vaccinating their children," Dillaha said.

Little Rock's Kavanaugh Pharmacy, which received its first doses for the new age group on Monday, had vaccinated about a dozen children by Tuesday afternoon, co-owner Anne Pace said.

She said the store had also fielded 30 to 40 calls on Tuesday from parents, including some who were angry the store can't vaccinate children younger than 3 -- a limitation set in state and federal laws.

"It's not that we don't want to, we just cannot," Pace said.

She said the uptake so far has been slower than it was for children ages 5 to 11, who became eligible for a pediatric version of the Pfizer vaccine in November.

The first few weeks after that vaccine first became available, the pharmacy was vaccinating about 100 children a day, Pace said.

"At that point, we still had our vaccine center, and we had a line out the door," Pace said.

"We had to enforce having appointments, because we had a small amount [of vaccine] at that time."

Dr. Susan Averitt, president of the Arkansas chapter of the American Academy of Pediatrics, said a few dozen of her patients have signed up to be notified once her clinics in Fayetteville and Springdale have doses for the new age group.

She's hoping to get an initial supply from the local health unit in Fayetteville by the end of the week.

Anna Strong, the chapter's executive director, said the vaccine should be widely available at clinics by the end of the week.

She made an appointment to get the vaccine for her own 14-month-old son at a Little Rock clinic on Friday. Her other son got his first shot in March, after he turned 5.

"I'm just super excited to have my full family vaccinated so we can get back to life as we knew it before the pandemic," she said.

Arkansas Children's plans to offer the Pfizer vaccine for children under 5 at its primary care clinics around the state, spokeswoman Hilary DeMillo said in an email.

"We expect our vaccine supply for children under 5 to arrive later this week and encourage families to talk to their child's doctor about vaccinating," DeMillo said.

"Caregivers will be able to make an appointment for the vaccine at www.archildrens.org/getmyvaccine when our supply arrives."

Outside of the state's vaccine program, some drugstores, including Walmart and Walgreens pharmacies, receive shipments of doses through the Federal Retail Pharmacy Program for COVID-19 Vaccination.

On its website, Walmart said it is now administering covid-19 vaccines to children ages 3 and older. The site didn't show any available appointments at stores in Central Arkansas for children under 5 as of Tuesday afternoon, however.

Walgreens said it was taking appointments on its website for vaccinations for 3- and 4-year-olds that will begin Saturday.

The website showed appointments available at stores in Little Rock as soon as Monday.

Meanwhile, Arkansas' count of coronavirus cases rose Tuesday by 764 -- about three times the size of the daily increase a day earlier but only larger by 24 than the rise the previous Tuesday.

Declining for the second day in a row, the number of covid-19 patients in the state's hospitals fell by three, to 178.

The state's death toll from the virus, as tracked by the Arkansas Department of Health, rose by 10, to 11,550.

After dipping a day earlier, the average daily increase in the state's case count over a rolling seven-day period rose to 719, which was still down from a recent high of 727 a day that the average reached on Sunday.

Similarly, with new cases outnumbering infections, the number of cases in the state that were considered active rose by 37, to 8,344, after falling on Monday.

The total as of Tuesday was still below a nearly four-month high of 8,763 cases that were active as of Sunday.

Dillaha noted that the total, which had been growing by about 2,000 a week, was only up by about 1,200 on Tuesday compared to a week earlier.

"I think that's a good sign that maybe the rate of increase is not as high at the moment," she said.

According to CDC estimates updated Tuesday, a growing proportion of cases nationwide, and particularly in a region encompassing Arkansas, are being caused by two strains of the omicron variant that initially gained attention for causing a resurgence of infections in South Africa in April and May.

Across the United States, the two strains, known as BA.4 and BA.5, accounted for almost 35% of new cases last week, up from about 23% the previous week, according to the CDC.

Among the U.S. Health and Human Services Department's 10 regions, the estimated percentage of cases caused by the two subvariants was highest in the one encompassing Arkansas, Louisiana, New Mexico, Oklahoma and Texas.

Another subvariant, BA.2.12.1, remained dominant nationwide, although the estimated percentage of cases it caused nationwide declined for the second week in a row, going from 62.7% the week ending June 11 to 56% last week.

In the Health and Human Services region including Arkansas, the percentage of cases caused by BA.2.12.1 fell from 56.1% the week ending June 11 to 48.7% last week.

Within Arkansas, Pulaski County had the most new cases, 97, on Tuesday, followed by Faulkner County with 55 and Washington County with 44.

Rising for the second day in a row, the number of the state's virus patients who were on ventilators grew by two, to 15, its highest level since April 21.

Also growing for the second straight day, the number who were in intensive care rose by eight, to 41, the largest number since March 26.

At its hospitals in Little Rock and Springdale, Arkansas Children's had eight covid-19 patients on Tuesday, up from seven on Monday, DeMillo said. 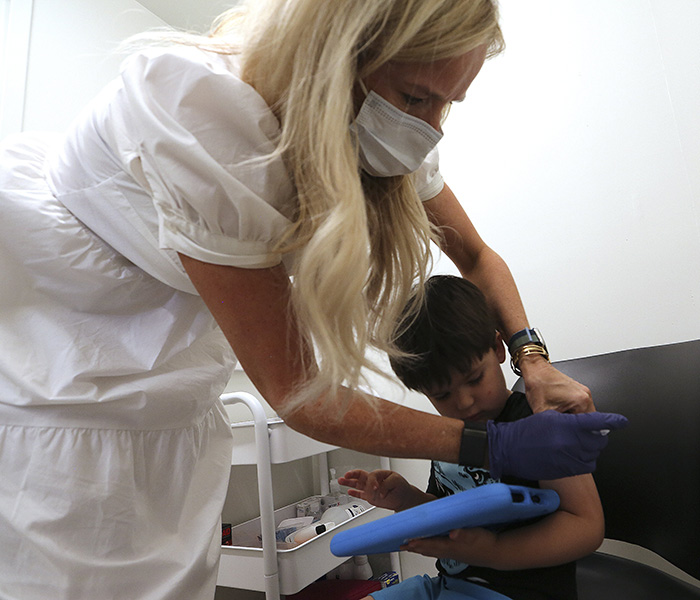 Antonio Serna V, 3, plays a game on his table as pharmacist Kori Gordon gives him his covid-19 vaccine on Tuesday, June 21, 2022, at Kavanaugh Pharmacy in Little Rock. (Arkansas Democrat-Gazette/Thomas Metthe)