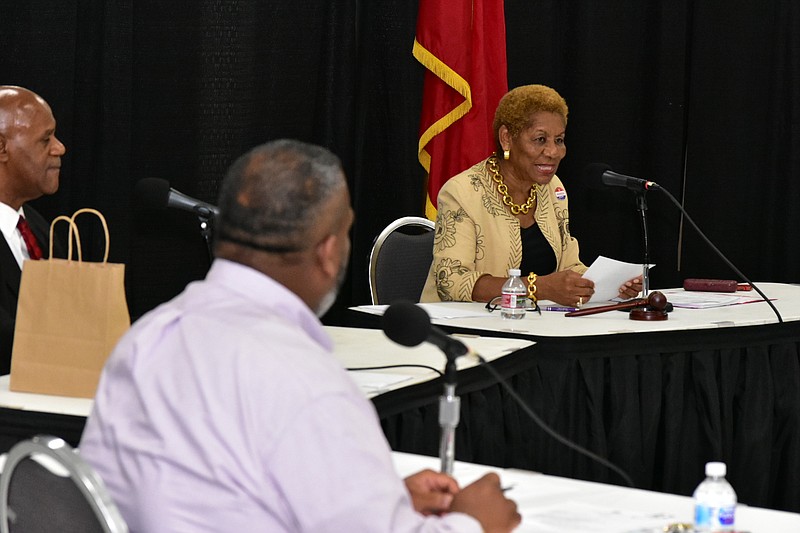 The Pine Bluff City Council voted to file a lien against Garland Trice in connection with the collapse of a Main Street building he owned. (Pine Bluff Commercial/I.C. Murrell)

Pine Bluff will perfect a lien against a recent City Council hopeful whose downtown property collapsed in 2014 and caused a portion of Main Street to be closed for almost three years.

The city is seeking to recover $123,196.97, what officials say is the cost of cleaning up the property owned by Garland Trice, doing business as Medic Transport. The property was located at 620 S. Main St.

Trice, who was not present at Tuesday's council meeting when a related resolution was passed, has until June 30 to file an appeal of the determination made by the council during a May 16 hearing. The council approved the resolution by a 5-2 vote, with Councilman Ivan Whitfield absent.

Whitfield was engaged in an election runoff with Lanette Frazier but lost in his bid to maintain his Ward 3 seat on the council. Trice ran for Ward 1 councilman but did not make it out of the May 24 primary.

The cleanup, Mayor Shirley Washington said, "was done as an emergency because the owner had many opportunities to clear that property. It became a hazard to the community as a whole. It tore up the building behind it. Much of it went into the street, and we had to issue an emergency clause to make that happen."

To perfect a lien means the city has made a claim against Trice's assets.

The property sat partially collapsed and forced a portion of Main Street from Sixth to Eighth avenues to be closed.

According to a 2017 article in the Arkansas Democrat-Gazette, Trice was found guilty in October 2016 of "failing to remove or abate a nuisance" and was sentenced to 30 days in jail. He was also fined $1,000.

Council members approved Washington's appointments of five people to the Convention Center and Hotel Public Facilities Board, which the city created June 6.

• $6,800.90 annually in salary and benefits for the District Court, Division II, as requested by Judge John Kearney

• $54,909 toward repair and maintenance of the old Bank of America Building

• and $143,530 for parks operations including completion of construction projects and the Operation Safe Parks initiative, as requested by Parks and Recreation Director Samuel Glover.