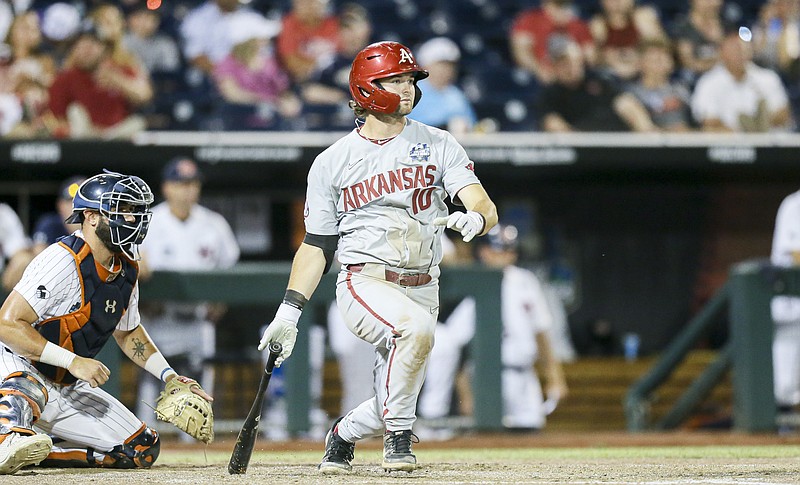 OMAHA, Neb. -- University of Arkansas Coach Dave Van Horn made his first batting order change of the NCAA Tournament on Tuesday, bumping Peyton Stovall up from the eight spot into the two hole, and the move paid immediate dividends in the Hogs' 11-1 rout of Auburn.

Stovall, who swapped places in the order with Brady Slavens, singled up the middle in the first inning to bring home Braydon Webb, who hit a double on the first pitch of the game.

Stovall had a career-high five hits, going 5 for 6 to improve to 9 for 16 (.563) in three games at the College World Series. Stovall, the first player to record five hits in a CWS game since 2009, broke the Arkansas single-game record for hits at the CWS and improved to 21 for 40 (.525) in the NCAA Tournament.

Stovall, whose batting average was .252 entering the NCAA Tournament, has bumped it up to .309 with a hot postseason run.

Arkansas is a national semifinalist for the fourth time since 2009 and for the sixth time in program history.

Three SEC teams -- Arkansas, Texas A&M and Ole Miss -- are among the final four remaining this season, and the fourth team, Oklahoma, will join the league by the 2026 baseball season.

Another day, another pair of wide-margin games at the College World Series on Tuesday.

Arkansas' 11-1 win over Auburn on Tuesday night pushed the average margin of victory to 6.7 runs per game.

Five games have been decided by four runs, including Texas A&M's 5-1 decision against Notre Dame on Tuesday, but that has been the closest margin of any game in Omaha.

Arkansas has hit the 45-win mark for the fifth consecutive season, earning the distinction of being the only team in Division I baseball to hit that mark every year since 2017.

The 2020 season does not count toward the statistic because it was canceled after four weeks due to the covid-19 pandemic.

Dave Van Horn, the Razorbacks' 20th-year head coach, has had seven seasons with at least 45 victories at Arkansas. He also achieved that feat twice at Nebraska in 2001 and 2002.

Jalen Battles turned a silky double play, the Razorbacks' 57th of the season, to get Will McEntire out of the first inning.

With Robert Moore playing in the outfield grass behind second base, Battles fielded Sonny DiChiara's grounder and had a long run to the second base bag to beat Brady Moore there. Battles just nipped him to the base and his relay to Peyton Stovall beat the lumbering DiChiara easily.

Auburn Coach Butch Thompson challenged the out call at second base and a replay review upheld the original call.

Arkansas closed the game with a 4-6-3 double play for Austin Ledbetter for its 58th of the year.

The Razorbacks led all of the five remaining teams in double plays turned, seven more than Auburn's 51, but trail national leader Baylor, which had 64, as well as North Carolina (59).

The owners of Rocco's Pizza & Cantina, which sponsors the Jell-O shot Challenge at the College World Series, announced on Tuesday they would be donating $2 for each shot purchased by fans of Arkansas and Ole Miss, who are running away with the challenge.

As of Monday night, Arkansas fans had purchased 6,526 shots and Ole Miss fans had bought 5,428 shot.

Arkansas and Auburn met on the diamond for the 100th time and the first time in the NCAA Tournament on Tuesday.

The Razorbacks extended their lead in the series to 51-49. The SEC West rivals started the season tied at 48 wins each.

Auburn eliminated the top three Pac-12 teams from the NCAA Tournament. The Tigers booted UCLA from the NCAA Auburn Regional, downed 3 seed Oregon State in the super regional and ousted Stanford from the CWS on Monday.

Auburn catcher Nate LaRue needed a moment to compose himself in the third inning. LaRue took a foul ball off the bat of Arkansas catcher Michael Turner in the bottom of his mask, smashing it into his chin and lower set of teeth.

Auburn trainers tended to LaRue for about a minute, and when he returned behind the plate, Turner turned and check on his counterpart.

Notre Dame third baseman Jack Brannigan made a shaky decision after fielding a sharp ground ball from Texas A&M's Dylan Rock with the bases loaded in the third inning.

Branningan appeared to have a shot at throwing out Jordan Thompson at home with a force out or beating Kole Kaler to third base for a force out, but he chose to throw across the diamond from near the third base line. His throw was a tough short hop that got away from Carter Putz for a two-base error, allowing two runs to score. A third run came across on a sacrifice fly.

The Irish, known for their pitching and defense, gave away all three runs with a pair of walks by Liam Simon, a balk, a relatively routine pop up by Kaler that fell in center field and the mental and physical error by Branningan.

"That was very uncharacteristic," Notre Dame Coach Link Jarrett said on an ESPN in-game interview. "Obviously the fly ball to center field, that's a play that we make. Maybe our center fielder [Spencer Myers] should have called off [second baseman] Jared Miller on that. Then the ground ball, we didn't get an out.

"So to be honest with you we're lucky it's 3-0. We gave them so many free opportunities."

Texas A&M made a pair of base-running mistakes in the early innings against Notre Dame even as the Aggies grabbed an early lead.

The Aggies' Austin Bost, who reached on a leadoff double, and Ryan Targac got caught trying a double steal by pitcher Liam Simon, who threw to third baseman Jack Branningan for a tag out.

In A&M's three-run third, Bost tagged from first base on a sacrifice fly and ran up on Dylan Rock, who had tagged at second but faked going to third. Rock was tagged out in the ensuing rundown at third base.