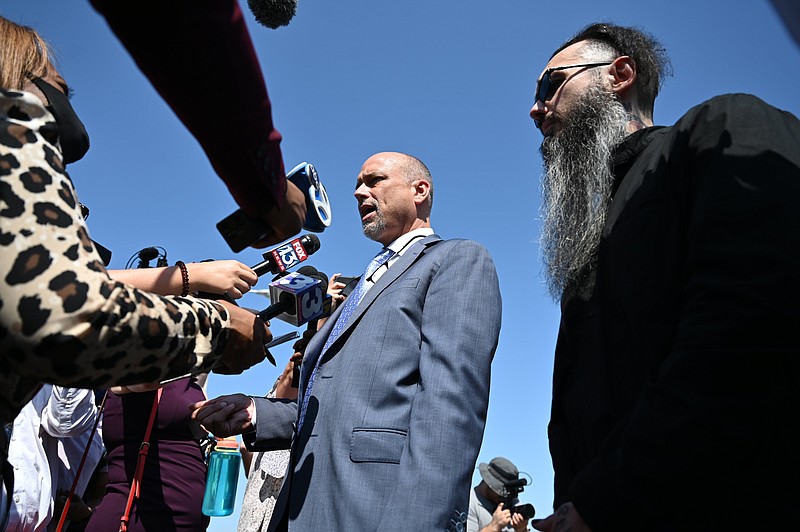 Damien Echols, right, stands with his lawyer, Patrick Benca, as they answer questions from the media following a hearing at the West Memphis District Courthouse on Thursday, June 23, 2022. (Arkansas Democrat-Gazette/Stephen Swofford)

Damien Echols, the highest profile member of the trio that was convicted in one of Arkansas' most notorious murder cases, had petitioned for permission to employ new technology to test for DNA on ligatures found with the three slain boys in a drainage ditch near West Memphis in 1993.

Circuit Judge Tonya Alexander denied Echols' request in a Thursday morning hearing in West Memphis, citing an Arkansas statute that requires those petitioning for new DNA testing to still be in prison.

Echols, along with Jason Baldwin and Jessie Misskelley, were convicted in 1994 for the killings, spending years in prison until they were granted immediate freedom under a deal known as an Alford Plea, which permitted Echols, Baldwin and Misskelley to maintain their innocence yet plead guilty in exchange for 18-year-sentences and credit for time served.

The three men were released in 2011, and have been working to clear their names since. No DNA evidence ever linked them to the murders of the three 8-year-old boys — Stevie Branch, Christopher Byers and Michael Moore.

Lawyers contend that more advanced genetic testing equipment might detect fragments of DNA that were not detectable when evidence was first examined in the early '90s.