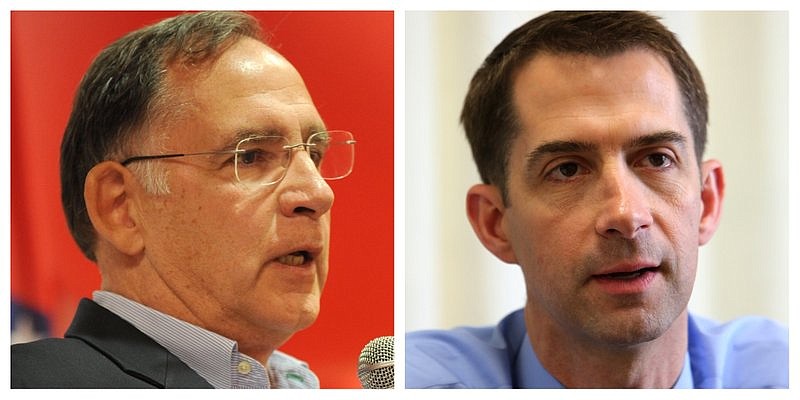 The 80-page bill comes after two mass shootings last month that shocked the nation: one at an elementary school in Uvalde, Texas, and another at a supermarket in Buffalo, N.Y.

The bill received a 64-34 tally during a procedural vote on Tuesday; both Boozman and Cotton were among the 34 -- all Republicans -- who did not support the bill during the procedural vote.

Lawmakers rolled out the legislative text more than a week after a bipartisan group of senators announced they had reached an agreement on the framework of the package, which touched on mental health, school safety and firearms.

Outside of the closely watched gun measures, the legislation provides funding for school safety and mental health efforts.

Cotton, a Republican from Little Rock, outlined his opposition to the bipartisan legislation in an interview on Wednesday, saying he's concerned about the "vague, undefined general terms" in the bill that violate "the rights of law-abiding citizens."

The legislation would expand restrictions on who can purchase a firearm, aiming to stop people convicted of domestic violence who have a "current or recent former dating relationship with the victim."

It does not extend to "a casual acquaintanceship" or "ordinary fraternization in a business or social context."

"I'm worried again that it's very vague in general and rather than Congress doing our job to define these things precisely, especially when you're talking about elements of criminal law, they're leaving it to the courts," Cotton said.

"After decades of inaction, the Senate is finally taking real, life-saving action to address our nation's gun violence epidemic," he said in a written statement, arguing that Boozman and Cotton are "continuing to put the interests of the gun lobby first."

"Too many innocent lives have been taken for no good reason," the group said in a press release. "As an organization, and as individuals, we cannot, and must not stand for this, or for any policy that upholds the current status quo of guns in the United States and Arkansas."

Cotton expressed some support for portions of the legislation, but said there are more "worrisome" measures than positive provisions.

One portion of the legislative proposal would strengthen background checks for gun buyers under 21 years old by requiring an investigative period to assess juvenile and mental health records.

"I definitely think juvenile records should be in the background check system up to a certain age," Cotton said. "I do worry again that that's been done in a very vague way that is going to put the thumb on the scale that anyone under the age of 21 will have a de facto 10-day waiting period."

On Wednesday afternoon, Boozman, a Republican from Rogers, said he was still going through the legislation but noted that he was leaning against supporting the bill.

"I like the areas [of] mental health. I like the idea of hardening schools," he said Wednesday afternoon.

Later Wednesday, Boozman said he would be opposing the legislation.

A bipartisan group of senators, including Sen. Chris Murphy, a Democrat from Connecticut, and Sen. John Cornyn, a Republican from Texas, issued a statement Tuesday saying the legislation seeks to keep schools safe, protect kids and lessen the threat of violence.

The group said the changes would save lives without infringing upon Second Amendment rights.

"We look forward to earning broad, bipartisan support and passing our commonsense legislation into law," the group said in a written statement.

The National Rifle Association was quick to come out against the legislation.

"We will oppose this gun control legislation because it falls short at every level," the gun rights groups said in a written statement. "It does little to truly address violent crime while opening the door to unnecessary burdens on the exercise of Second Amendment freedom by law-abiding gun owners."

The NRA spent more than $1.9 million supporting Republican Tom Cotton's candidacy during the 2014 Senate campaign, according to the Federal Election Commission.

Boozman ran with the NRA's endorsement in this year's Senate Republican primary, which he won last month. The endorsement was highlighted in a campaign advertisement as well.