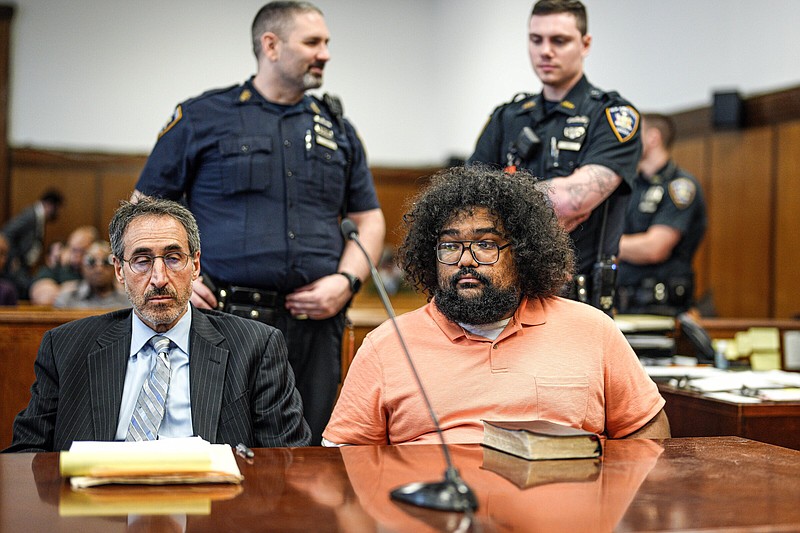 Richard Rojas (right) appears in court Wednesday, with his attorney Enrico DeMarco, as he waits for the verdict on his trial, in New York. (AP/Daily Mail/Curtis Means)

NEW YORK — The man who drove his car through crowds of people in Times Square in 2017, killing a young tourist and maiming helpless pedestrians, was cleared of responsibility Wednesday because of mental illness.

A New York City jury accepted an insanity defense claiming Richard Rojas was so psychologically disturbed that he didn’t know what he was doing.

The judge has said the finding would qualify Rojas for an open-ended “involuntary mental commitment” instead of a lengthy prison term. He ordered Rojas held while he drafts an examination order and said there would be a hearing on the matter today.

Rojas, 31, was accused in an attack that injured more than 20 people and killed Alyssa Elsman, 18, of Michigan, who was visiting the popular tourist destination with her family.

The jury was instructed that if it found prosecutors had proven their case, it also had to decide whether or not Rojas “lacked responsibility by reason of mental disease or defect.” Attorney Enrico DeMarco called the verdict “right and humane,” adding that winning over the jury was an uphill battle “because it was such a horrible act.” The trial featured testimony from victims who suffered severe injuries.

Rojas family members testified how he descended into paranoia after he was kicked out of the Navy in 2014.

Daunte Wright family to get $3.2 million

BROOKLYN CENTER, Minn. — A suburban Minneapolis city has agreed to pay $3.2 million to the family of Daunte Wright, a Black man who was fatally shot by a police officer who said she confused her gun for her Taser.

The tentative settlement also includes changes in police policies and training involving traffic stops like the one that resulted in Wright’s death, according to a statement Tuesday night from attorneys representing Wright’s family.

Wright was shot in the chest by Brooklyn Center Officer Kim Potter after the 20-year-old was stopped for expired registration tags in April 2021. The former officer was convicted of first- and second-degree manslaughter and was sentenced to two years in prison.

Potter is heard on video yelling “Taser” several times just before she fires her pistol.

Wright’s family members “hope and believe the measures of change to policing, policies and training will create important improvements to the community in Daunte’s name,” said co-counsel Antonio Romanucci. “Nothing can bring him back, but the family hopes his legacy is a positive one and prevents any other family from enduring the type of grief they will live with for the rest of their lives.”

CHARLESTON, S.C. — Democratic gubernatorial nominee Joe Cunningham is proposing an age limit for South Carolina politicians — a cap that would cut off the 75-year-old incumbent Gov. Henry McMaster — and making a veiled argument that even fellow Democrats like President Joe Biden are staying “in office way past their prime.” “Our country and our state are being run by a geriatric oligarchy, people who stay in office way past their prime,” Cunningham says in a campaign video, provided Wednesday to The Associated Press ahead of its release.

“Some of these folks have been clinging onto power for 30, 40, even 50 years,” Cunningham says. “The folks who are making a career out of politics are making a mess of our country.” Cunningham proposes an age limit of 72 for South Carolina politicians that would require a constitutional amendment approved by voters. The state already requires judges to retire at 72, although they are allowed to remain on the bench in a fill-in capacity.

Cunningham ends the two-minute video by making a bipartisan appeal for support from those who may have voted for Biden, former President Donald Trump or McMaster “sometime in the last 40 years.” Cunningham, who recently turned 40, has frequently jabbed at McMaster’s age, arguing that the Republican — who has served in a variety of roles including lieutenant governor, U.S. attorney and state attorney general, for the majority of the past four decades — has “been in politics longer than I’ve been alive.”

WASHINGTON — Sen. Kevin Cramer of North Dakota announced Wednesday that he suffered a serious injury to his right hand and may face amputation of a finger.

The Republican lawmaker said he was working in his yard over the weekend when he sustained the injury, which required immediate surgery.

“I continue to remain in North Dakota close to medical care as there is a high risk of infection and the possible need for amputation,” Cramer said in a statement. “I am alert and in good spirits.” The injury means Cramer will miss the remaining days of votes and hearings this week as the Senate is advancing a bipartisan gun safety package.

He said he plans to return to Washington after the Fourth of July holiday recess and expects “to be doling out a lot of left-handed fist bumps.”