When told that Black people have no history, Charles Blockson set out to prove his grade school teacher wrong 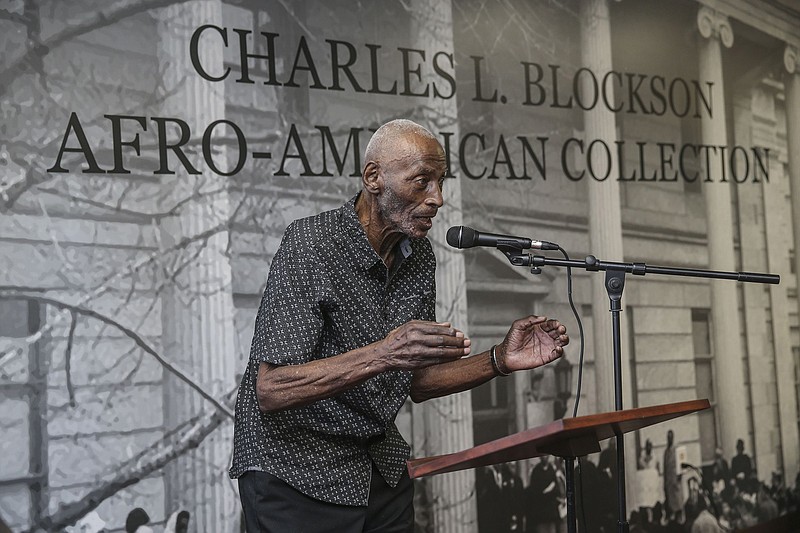 Charles L. Blockson addresses an audience at Centre Theater Gallery in Norristown, Pa., where some of the 700,000 items from his Afro-American collection are on display. (Philadelphia Inquirer/TNS/Steven M. Falk)

A 1942 classroom with old-style wooden desks, a chalkboard, and a large, blown-up grade-school class photo showing Charles L. Blockson — one of only a handful of Black children in a predominantly white group — greets you early in the exhibition.

He looks shy and pensive in the class photo. But it was a fourth-grade history class that fueled Blockson, then just 9 years old, with anger and lifelong determination.

The reconstituted classroom is part of the "Charles L. Blockson Exhibition: An African and Afro-American Collection," which opened June 17 at the Centre Theater Gallery in Norristown, Pa., which is the celebrated historian's hometown and birthplace.

Blockson wrote about the fourth-grade incident in his memoir: "Damn Rare: The Memoirs of an African-American Bibliophile." He had raised his hand to ask his teacher why she never discussed Black people's historical achievements.

The teacher replied: "Negroes have no history. They were born to serve white people."

From that day on, he would make it his life's mission to search for, collect, preserve and teach the history of Black people in America and all over the world. A Blockson quotation is printed on the wall above the entrance to the classroom exhibit: "She said Black people have no history. I set out to prove her wrong."

IN KEEPING WITH MISSION

The Centre Theater Gallery exhibition chronicles Blockson's life and work as a historian, author, bibliophile and collector of books, historical documents, art and other items in keeping with that mission.

Blockson curated the Charles L. Blockson Afro- American Collection at Temple University Libraries and the Charles L. Blockson Collection of African-Americana and the African Diaspora at Penn State University Libraries. His achievement has been compared to the Schomburg Center for Research in Black Culture that Arturo Alfonso Schomburg, an Afro-Puerto Rican, founded in New York in 1925.

In 2010, Blockson donated Harriet Tubman's shawl, along with other Tubman artifacts to the Smithsonian's National Museum of African American History and Culture in Washington — six years before the museum opened in September 2016. According to the Smithsonian, Queen Victoria had presented the silk lace and linen shawl to the famous abolitionist and Civil War hero in England around 1897.

Diane D. Turner, curator of the Blockson Collection at Temple, said that a Tubman relative — her great-niece Merlie Wilkins — had given the shawl and other personal items to Blockson rather than leaving them to a family member.

"She understood his dedication to African American history and knew they would be in a safe place with him, and not sold or stuck in somebody's closet," Turner said.

Turner said Blockson had been "hurt and embarrassed" by his teacher's remarks that Black people had made no contributions, because "he knew it was a lie."

"It fueled him to search for his history and to start collecting books and anything related to people of African descent."

Despite what his fourth-grade teacher had said, Blockson came from a family that placed importance on Black history and culture, according to Turner. His father subscribed to Black-owned newspapers and, as a member of the NAACP, The Crisis magazine edited by W.E.B. DuBois was regularly mailed to the Blockson household.

His grandfather sang Negro spirituals and told him about family members who escaped slavery to Canada on the Underground Railroad, guided by Tubman, "the general" herself.

"Early on, he had a sense of who he was," Turner said.

Faye Anderson, a local public historian and director of All That Philly Jazz, who is a vocal advocate for preserving the John Coltrane House, called Blockson an inspiration.

She noted that he is responsible for most of the historic markers associated with Black history and culture in Philadelphia. It was seeing the Billie Holiday historical marker that led her to document Philadelphia's jazz history.

"Dr. Blockson fought to move beyond the Founding Fathers and Benjamin Franklin's Philadelphia," she said.

Turner also said Blockson inspired her as she was pursuing her graduate studies in history. She said it had been a lonely struggle for Blockson, because a lot of people, even Black people, questioned why he was collecting "old Black books."

"Even today, there are struggles to get African American history into the curriculum," Turner said. "There's this debate about critical race theory and people not wanting to hear the truth because they can't handle the truth."

Zone, 43, has a classroom story to tell also. He was 14 and in the ninth grade when Blockson came to his school to give a lecture on the Underground Railroad. "I remember how that resonated with me when I was in high school," said Zone, who is white.

DO A BETTER JOB

As a businessman, Zone said he has always thought that Norristown should do a better job in talking about the successful people it has produced. Blockson, 88, was born in Norristown in 1933. He has received numerous awards, including the Philadelphia Award in 2017 as well as a couple of honorary doctorate degrees, but insists on being addressed simply as "Mr. Blockson."

"Mr. Blockson is a local hero of mine," Zone said. "He's been decorated and honored throughout the entire United States and the world. We needed to do something to tell everyone in our town who he is and that he is one of our own."

Zone worked closely with Turner and archivist Leslie Willis-Lowry of the Blockson Collection at Temple to determine which artifacts among its 700,000-item collection they would bring or reproduce for the Norristown exhibit. The Penn State Blockson Collection also contributed items. Zone said as he got to see some of the archives at the Blockson Collection, he realized what most people know about Blockson's work "is just scratching the surface." He said he and his staff were "blown away at the amount of work he has done" over the years and the people he has met.

Blockson played football at Penn State with Rosey Grier but declined an offer to play professionally with the New York Giants to pursue his love of history. Blockson also met his personal hero, Paul Robeson, at the Hospital of the University of Pennsylvania where Robeson was undergoing tests. He said Robeson told him, "It is important for you to continue to preserve our history."

He has been photographed with U.S. presidents and South Africa's Nobel Peace Prize winner, the late Bishop Desmond Tutu. He met both boxing legend Muhammad Ali and track star Wilma Rudolph at the 1960 Olympics in Rome.

Blockson attended a private opening reception at the gallery on June 15, and gave brief remarks. He looked at the crowd and said he was pleased to see it was filled, about evenly, with Black and white people.

He acknowledged he no longer stood with the robust 6-foot-3, 195-pound strength of his football and track-star years. That night he was frail; his voice weakened by Parkinson's disease, he said.

But he was firm about this: "Everywhere I travel around the world, and I've been to so many places ... I've never forgotten, and I was always proud to be from Norristown.

"Thank you, I love you Norristown. Keep on keeping on."