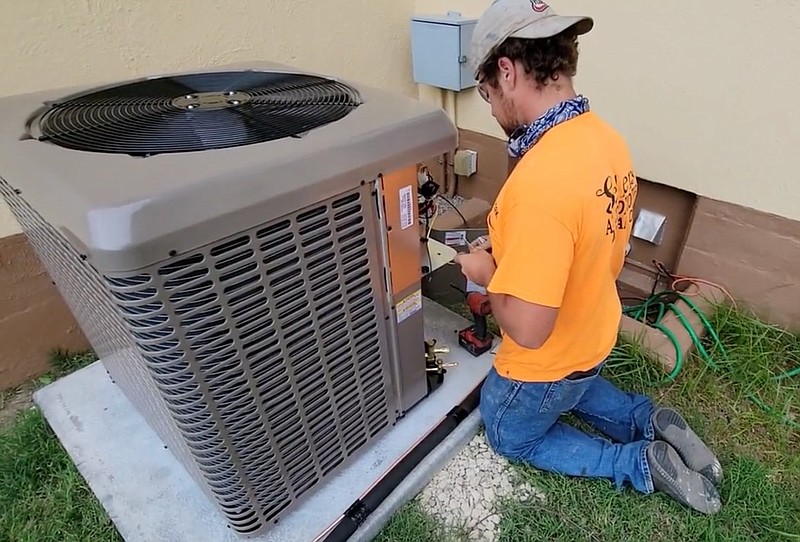 ROGERS -- Money for home repairs is available to low-income residents and families, and applications in the city are just beginning to pick up from a pandemic lull, according to Donna Johnston, the city's Community Development Block Grant administrator.

Eligible projects can include making a home safe and secure, reducing lead-based paint or mold hazards, updating the building to current standards, improving energy efficiency and making the home handicap-accessible, according to the city's website. Emergency repairs and other necessary work, like replacing an air conditioning unit, can be included as well.

The city receives money each year through the Community Development Block Grant program, which is managed by the U.S. Department of Housing and Urban Development.

Applications for housing repairs dropped significantly in 2020 and 2021, which saw two and four houses repaired those years, respectively, according to Johnston. Before the pandemic, the program was helping repair eight to ten houses each year in the city.

Ten applications for housing repairs have been submitted since January. Four were approved to have the work done, and two will be under construction in July, she said.

"We're still low compared to where we were before the pandemic," she said.

Johnston suspects a few factors are involved in the low numbers.

City staff limited work to one housing project at a time during the pandemic in order to allow manageable contact tracing efforts, if necessary, she said. Most homes in the program have at least one elderly person, which made covid-19 safety measures important, she said.

Measures like limited projects and mandatory masks have been lifted, but work has continued to move at the same pace due to a lack of qualified applicants, according to Johnston.

Strict qualifications limit the number of applications that are accepted, she said.

"One of the biggest problems I have is getting people qualified. There's so many rules and regulations," she said.

Less applicants qualified during the pandemic because some had fallen behind on their mortgage payments, she said.

To qualify for the program, residents must live within city limits, have a warranty deed or a mortgage, be in good standing with the mortgage company, have homeowner's insurance, have paid personal and real estate taxes and have an income equal to or less than the Section 8 low-income limit, which is 50% of the median family income in an area, according to the city's website. They must have equity in the home and occupy the space for at least 12 months before applying, Johnston said.

Many residents also have yet to hear about the program, though the city has tried to get the word out, she said.

Before the pandemic, the neighbors of previous projects often applied, but neighbor referrals have dropped the last two years as people have become more confined to their homes, she said.

Aracely Coreas' family heard about the housing renovation program several weeks ago -- months after the heating, ventilation and air conditioning unit broke in their home. Their home lost heating in December, Coreas said, but they couldn't afford to replace it.

Her daughter and grandchildren piled on thick blankets for warmth throughout the winter, but it became more difficult to cope when temperatures began to rise above 90 degrees, she said.

Coreas said her family would stay over at other homes, spend time out of the house when possible and take cold showers before bed to cool down.

"We've been suffering all these days without A/C," she said.

Last week, the unit was replaced as a part of the block grant program.

"It's a big blessing," she said about the repairs. "I don't have words to express how thankful I am."

Of about $460,000 in annual community development block grant funds, between $200,000 and $250,000 is designated each year for housing renovation and emergency repair projects in Rogers, Johnston said. Some of the block grant funds are used for public services as well.

The city is still using money from the past two years for the program, with $258,000 available now, she said.

The funds can roll over for at least three years, she said.

Each year, Johnston presents a Community Development Block Grant action plan to the City Council for approval before submitting the plan to the Housing and Urban Development Department, which distributes the money to cities based on the most recent census. The city also reports to the federal housing department each March with reasons for not making the year's housing renovation goals.

The recent issue of fewer applications and projects has been a common one among participating cities, according to Johnston.

Other block grant programs in Rogers, like the transportation assistance program, have also seen less use, she said. Johnston said about 100 people using the program used to cost about $2,000. With significantly less demand for rides, amounts between $200 and $700 have been used each of the last two years.

Many of the people who participate in the program worried about leaving their homes, stopped going out during the pandemic and likely have gotten used to staying home more often, she said.

The qualifications for renovation and repair projects across the three cities' programs are similar, according to Yolanda Fields, Fayetteville's community resources director.

In 2022, nine projects have been completed in Fayetteville, 12 are in progress and six more applications have been submitted, which is comparable to precovid levels, Fields said.

The city saw a dip in applicants and projects during 2020, but saw above-average numbers last year, she said.

In Springdale, the program has completed about five projects in 2022, fewer than the 22 home projects finished during the state fiscal 2020, which ends June 30, according to Dean Allen, community development program manager. Five projects were done during fiscal 2021.

Before covid, the city would renovate a house in 30 days, but projects are taking two to three times longer now due to supply issues, he said.

The program has eight projects in progress and nine more on a waiting list, according to Allen. The city usually sets aside about 80% of its block grant money for housing renovation, he said.

Fort Smith had to shut down its program during the pandemic, but applications are coming in just as before, said Candyce Gabucci, the city's director of community development.

"We had to close the program down for a brief period during the height of covid and only tended to emergency situations during that time," Gabucci said. "Now applications are coming in at a regular pace and aside from that hiatus in 2020, we've seen steady numbers over the past three years."

The city designates around 30% of its block grant funds to the housing assistance program, she said.

The housing renovation program, which repairs between 25 and 40 homes in the city each year, received about $262,000 from the fund during 2022, she said.