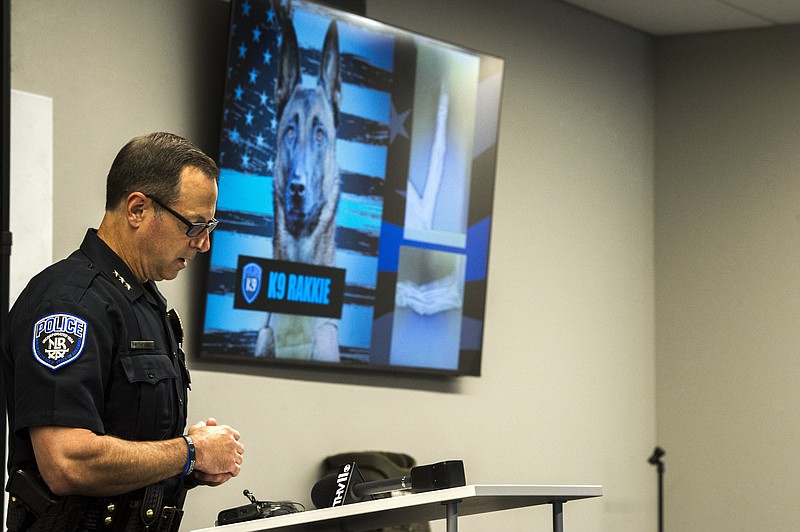 North Little Rock Police Chief Patrick Thessing addresses the media during a press conference on Monday, June 27, 2022 about an officer involved shooting on Sunday. Arlen Jay Bates, 66, was killed in the shooting after he fired on a North Little Rock SWAT Officer and injured a K-9 officer during a prolonged standoff, according to a press release...(Arkansas Democrat-Gazette/Stephen Swofford)

North Little Rock police have identified 66-year-old Arlen Jay Bates as the man whom officers shot and killed during an armed standoff with a SWAT team Sunday.

A North Little Rock police officer suffered minor injuries after being shot while wearing a protective vest. If not for the protective vest, Police Chief Patrick Thessing said, there was "a high probability" the officer would have died.

A police service dog, "Rakkie," was shot in the leg but is likely to recover, Thessing said.

The standoff started after police responded to a call about a domestic disturbance with a weapon at 3108 Donaghey Drive on Saturday night in the city's Lakewood neighborhood. Police were told a man armed with a gun was inside the residence and had fired shots in the direction of at least one victim.

After two victims left the residence, police surrounded the home and attempted to speak with Bates via a PA system from a police car, with no responses.

"Mr. Bates refused to talk to officers. Basically shut the door and went inside," Thessing said.

About 1:30 a.m. Sunday, police decided to call on a special operations unit to enter the home. The special operations team includes SWAT and mental health experts. Police first attempted to contact Bates again through text messages and phone calls, but they went unanswered.

The SWAT unit breached the home, first sending in a robot with a camera in an attempt to locate Bates. About 6 a.m., police entered the home to arrest Bates on two counts of aggravated assault on a family member or household member and third-degree domestic battery.

Police located Bates in a back bedroom. Thessing said Bates had a gun and initiated the gunfire. During the shootout, police shot and killed Bates.

Their names have not been released.

Thessing said police decided to enter the home to arrest Bates given that he was accused of domestic violence offenses.

"Domestic battery offenses are ones that we do not walk away from because that can lead to, you know, later on something happening to another victim," Thessing said, adding that that is something "we will make an arrest on."