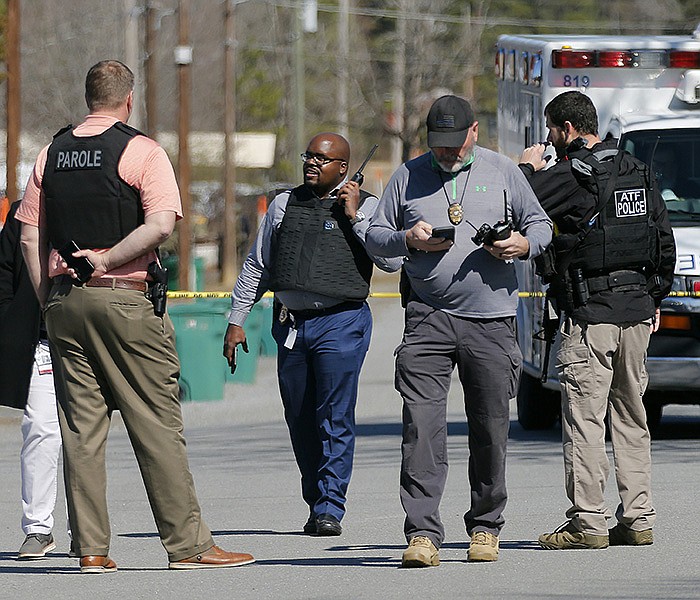 A man accused of killing an Arkansas Department of Corrections officer after an hourslong standoff with police at a residence outside Maumelle was arrested Tuesday morning, authorities said.

Demark Lee Jordan was located by authorities around 6 a.m. Tuesday at a QuikTrip, 18804 MaCarthur Drive, in the community of Morgan, an arrest report states. The station is just over a mile from the home address listed for Jordan in the report.

Jordan was booked into the Pulaski County jail on Monday on one count of capital murder and two counts of criminal attempt, according to an online inmate roster. No bond was listed.

Sgt. Joshua Caudell, 29, was shot in the chest and killed by Jordan on Monday while searching the area with a group of fellow K-9 dog handlers, Lt. Cody Burk of the Pulaski County sheriff's office said.

Burk said the K-9 units were going through the woods with the dogs when they were alerted to a nearby trailer.

At about 4 a.m. Caudell, another K-9 handler and a sheriff's deputy were trying to look under the trailer when shots were fired by the subject -- identified by police as Jordan. The arrest report states Caudell was shot in the chest.

Caudell, a husband and father of three, had been with the Tucker K-9 unit and the Department of Corrections since December 2012.

"The entire Department of Corrections mourns the loss of a dedicated officer," Corrections Secretary Solomon Graves said in a news release. "Our thoughts and prayers are with his family during this time."

Pulaski County deputies first responded to Jordan's residence, on the 1400 block of Corvallis Road near Maumelle, at about 8 p.m. Sunday for a welfare check on Jordan's wife, Burk said.

"She did not show up for work that day," Burk said. "Once we reached the residence, shots came from the residence that we believed were directed towards us."

Authorities later learned the wife was not at the residence and that she was safe, Burk said.

When units knocked on the front door attempting to contact Jordan, no response was given, according to the report. Authorities said a sergeant knocked again and shined his flashlight into the residence through the glass of the front door.

According to the report, Jordan shot through the door, prompting the sergeant and a deputy who was also at the scene to seek cover. Though neither law enforcement officer was struck by a bullet, shards of glass reportedly struck the sergeant in the face and neck.

Patrol vehicles were also struck by rounds being fired from inside the home, the report states.

The Pulaski County SWAT team was called and surrounded the house, Burk said. Burk said that at about 2:30 a.m., it was determined the house on Corvallis Road was empty.

K-9 units from the Arkansas Department of Corrections arrived about 3 a.m. About an hour later, Jordan was tracked to the trailer he was hiding under on Overstreet Road -- not far from his residence, authorities said.

"After the initial shots were fired, they believed he was still underneath there and they set up a perimeter," Burk said.

The Arkansas State Police Bomb Squad and the Little Rock Police Bomb Squad arrived to assist, Burk said. About 10:30 a.m., robots from the teams were sent under the house, and authorities were said to have discovered that Jordan was no longer there.

The U.S. Marshals Service; Bureau of Alcohol, Tobacco, Firearms and Explosives; Federal Bureau of Investigation; Arkansas State Police; and several local agencies were assisting the sheriff's office with the search for Jordan by early Monday evening.

There had been multiple possible sightings of Jordan throughout Monday, but none of them resulted in his capture, Burk said.

Burk said police had previous contact with Jordan at the Corvallis Road residence during a domestic disturbance in 2020. He said he was unaware of any other contact.

Louis Jackson, 30, of Ward said he is a friend of Jordan's and owns a barbershop where Jordan worked.

Jackson said he showed up at the standoff hoping to assist officers. He and another friend offered to talk over a speaker to Jordan, in hopes of defusing the situation, he said.

"We just wanted to talk to him and let him know he had people out there who loved him," Jackson said.

Officers didn't seem to take information that Jackson and others offered seriously, Jackson said. He said they didn't pass the information up the line of command.

Jackson said he thinks police could have done more during the standoff to calm Jordan.

"I'm not a guy to bash the police, but we have to be transparent and go through the proper channels to prevent these type of things from happening," Jackson said.

Burk said it is protocol not to allow family or friends to speak to subjects during standoff situations. He said there are concerns that those conversations could distress a subject more.

Keith Taylor, an adjunct assistant professor at John Jay College of Criminal Justice and former New York City assistant corrections commissioner and New York Police Department special assignment sergeant in the emergency services, also said it is not good practice to introduce outside players into a critical situation. He said it could end with negative results.

"In the movies, they have family members interact with those in hostage situations," Taylor said. "But in reality, you are not going to have an unknown interact with the subject. They are not trained hostage negotiators, and there may be limited opportunity to get an outcome where you don't have a loss of life."

As a National Guardsman with mental health training, Jackson said he had been concerned about Jordan's behavior for a couple of weeks. This included posts on social media and a recent phone call, Jackson said.

Jackson said Jordan had plans to see his counselor in the coming days.