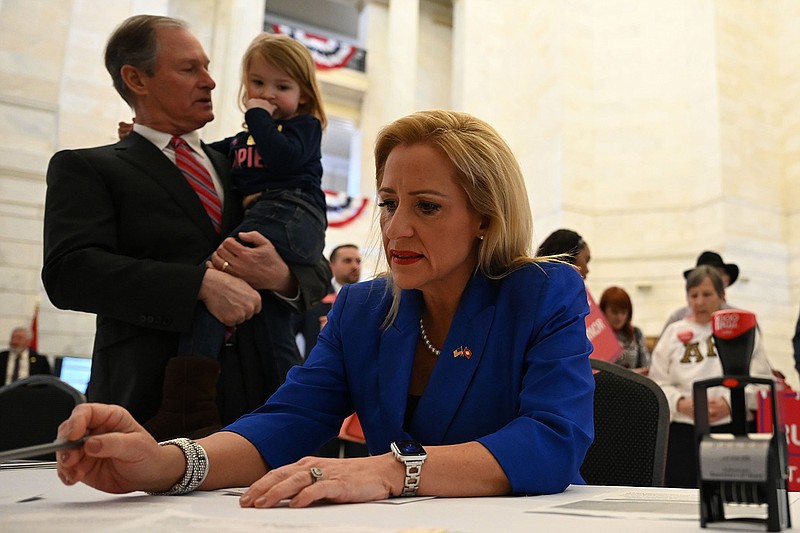 Leslie Rutledge, right, files her candidacy for Lt. Governor as her husband, Boyce Johnson, and her daughter, Julianna Carol Johnson, 2, stand with her in the Arkansas State Capitol on Monday, Feb. 28, 2022. (Arkansas Democrat-Gazette/Stephen Swofford)

Also among the 56 candidates who filed Monday were Jan Morgan of Hot Springs, who is seeking the Republican nomination for the seat held by U.S. Sen. John Boozman, R-Ark, and David Sterling, who is running for a position on the state Supreme Court.

The filing period, which refers to the time frame for candidates to submit the required paperwork to the Secretary of State's office to appear on the ballot for the 2022 election, ends at noon today for partisan offices and at 3 p.m. for judicial offices.

Rutledge is the seventh candidate and the fifth Republican to file for the state's No. 2 job.

Rutledge, of Maumelle, initially launched a campaign for Arkansas' governorship in July 2020 but exited that race in November.

She previously downplayed the role of lieutenant governor, responding to speculation that she would drop out of the governor's race in February 2021 by saying she would be "bored with a part-time job and a staff of two."

Asked about the comment Monday, Rutledge said, "It's important for Arkansans to understand that, yes, it is a part-time job."

In July, Rutledge said she planned to try to get a proposed constitutional amendment that would eliminate the state's individual income tax on the 2022 ballot. On Monday, she said had put that effort on hold to focus on winning the Republican primary for lieutenant governor.

Bequette, of Little Rock, said Monday he is running because he is tired of seeing "Republicans governing like Democrats."

"Everywhere I look I still see the Democrat version of state government firmly in place with few exceptions," he said.

He said his focus will be on dismantling Democratic policies and implementing Republican ones.

"Those are the winning policies that voters will elect us to do, and voters elected people eight to 10 years ago to do that they didn't get done," Bequette said.

Bequette said he stands out in the field because he is not a career politician.

"I am a business owner. I am just a common, ordinary citizen who wants to see safety, prosperity and liberty unleashed in our state," he said.

Bledsoe said in a phone interview Monday that people he has spoken to while campaigning like that he is a physician, not a politician.

"I think it's time that we have a different sort of person running, and I think the people of Arkansas agree with that," he said.

He said he would use the office as a platform to promote entrepreneurship and innovation, as well as "lowering taxes so businesses can thrive and individuals can keep more of their hard-earned money," and selling Arkansas to other states and regions.

Asked last week how he would differentiate himself from the other candidates in the race, Rapert cited his work in the Legislature on cutting taxes, opposing abortion and securing Second Amendment rights, as well as standing up for Arkansans who might have been fired for not complying with vaccine mandates.

"I plan to do everything that I can to run hard in this race for the next 90 days and I believe that my message, which is proven, I have a record there. People know what I've stood for, they know how I voted, they know I will fight for them, they know that they can trust me to continue to do that," he said.

Webb told the Arkansas Democrat-Gazette last Tuesday that he is fully ready to use his experience to act as a full-time lieutenant governor to help Arkansas' next governor, whom he believes will be Republican Sarah Huckabee Sanders.

"I want to establish a good relationship with our next governor Sarah Sanders and be available to her and sit in on council meetings," he said.

Kelly Krout of Lowell filed to seek the Democratic nomination for lieutenant governor last Tuesday. Krout, a foster care advocate, said she would bring a fresh perspective to the role and use it as a platform to advocate for Arkansas families and children.

Morgan, owner of The Gun Cave in Hot Springs and a former journalist, joins Boozman, former University of Arkansas football player Jake Bequette of Little Rock and pastor Heath Loftis of Stuttgart in the GOP primary for the U.S. Senate seat. Arkansas' other U.S. Senate seat is not up for election this year.

Morgan criticized Boozman's voting record, saying he has voted for President Joe Biden's policies and nominees more than a third of the time, and said she is the only candidate who has gotten laws passed in Arkansas by pushing against vaccine mandates and for gun rights and immigration reform.

"I've been here and I've been in the fight for the people," she said. "Right now, that seat is owned by big corporations. I want to take that U.S. Senate seat back for the people of this state. It needs to be returned to the power of the people."

Democrats Jack Foster of Pine Bluff, Natalie James of Little Rock and Dan Whitfield of Bella Vista, as well as Libertarian Kenneth Cates, also have filed for the seat.

Monday's filings also included Anna Beth Gorman of North Little Rock, who is the second Democrat to file for secretary of state.

"My job as an executive director of a nonprofit is administrative," said Gorman, who is executive director of the Women's Foundation of Arkansas. "It is managing large projects. It is working with a cross-section of stateholders. I am absolutely the most qualified candidate in both sides of the aisle."

In an interview last week, Price touted his experience as a former election commissioner.

"I am the only candidate who has experience overseeing elections and has had boots-on-the-ground experience," he said. "We need someone in this office that understands the problems everyday Arkansans face at the polls."

Sterling, chief counsel for the Arkansas Department of Human Services, filed Monday to run for Position 2 on the state Supreme Court. The incumbent in that seat is Robin Wynne, who has filed to seek reelection. District Judge Chris Carnahan of Conway is also running for the seat.

Sterling said he is a judicial conservative who believes in the separation of powers and will not legislate from the bench. He noted that he has been appointed to serve as a special justice on the state Supreme Court twice and said he believes he brings the right experience to the job.

"I will serve with honor and integrity on the bench," he said. "I believe in the constitution, and I will interpret the constitution according to the original intent of the founding fathers."

He said he thinks Arkansans are looking for a judge who reflects their values. 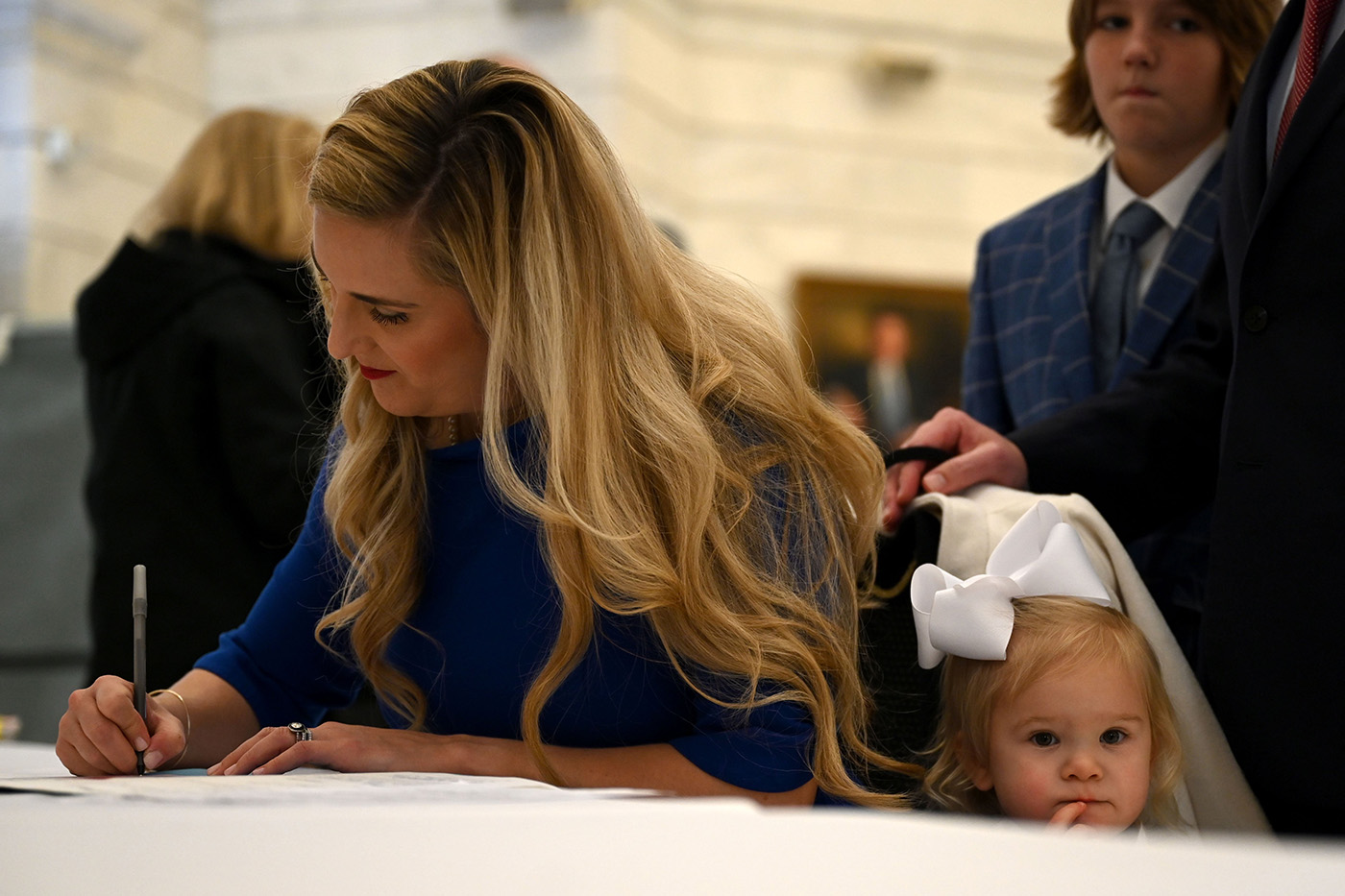 Anna Beth Gorman files her candidacy for Secretary of State with her family Luke, 12, Elthie, 2, and her husband Colin in the Arkansas State Capitol on Monday, Feb. 28, 2022. (Arkansas Democrat-Gazette/Stephen Swofford)