Mistrust of CDC named as issue by Compiled Democrat-Gazette Staff From Wire Reports | March 8, 2022 at 4:33 a.m. 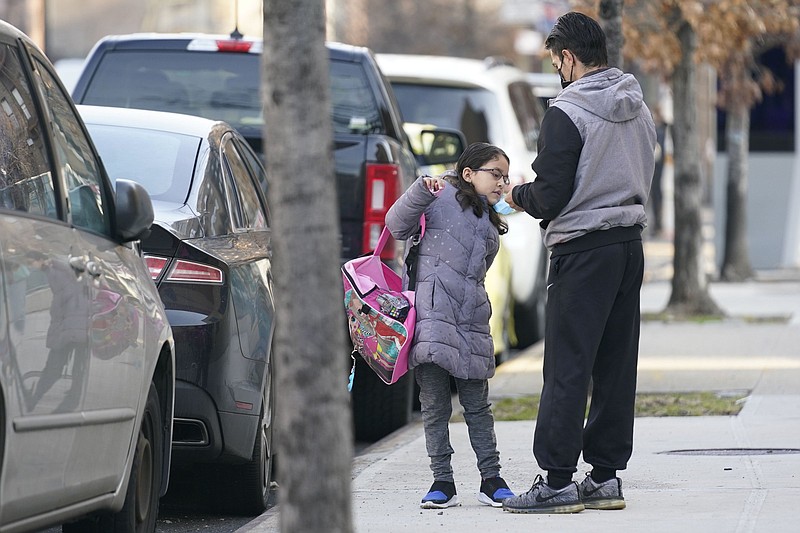 A team of former Biden covid advisers and dozens of other outside experts issued Monday more than 250 discrete recommendations to combat the coronavirus with the goal of avoiding the societal disruptions that have characterized the past two years.

The experts argue that the White House must take additional steps to combat the virus and reduce the risk of other infectious diseases. Recommendations include vaccinating 85% of Americans, ensuring that people experiencing long covid can get disability benefits and developing a plan to restore trust in the Centers for Disease Control and Prevention.

Many of the recommendations were not included, or offer more detail, than those issued as part of the plan last week from the White House, which laid out its own "road map" to help Americans "get back to our more normal routines."

The 136-page report comes as the official global death toll from covid-19 eclipsed 6 million on Monday -- underscoring that the pandemic, now entering its third year, is far from over.

"Trying to eliminate covid is not realistic," the experts write. The group also cautioned that the virus is not yet at low enough levels to be considered "endemic."

The milestone, recorded by Johns Hopkins University, is the latest tragic reminder of the unrelenting nature of the pandemic even as people are shedding masks, travel is resuming and businesses are reopening around the globe.

It took the world seven months to record its first million deaths from the virus after the pandemic began in early 2020. Four months later another million people had died, and 1 million have died every three months since, until the death toll hit 5 million at the end of October.

Now, it has reached 6 million -- more than the populations of Berlin and Brussels combined, or the entire state of Maryland. But despite the enormity of the figure, the world undoubtedly hit its 6 millionth death some time ago.

Poor record-keeping and testing in many parts of the world have led to an undercount in coronavirus deaths, in addition to excess deaths related to the pandemic but not from actual covid-19 infections, like people who died from preventable causes but could not receive treatment because hospitals were full.

The United States has the biggest official death toll in the world, but the numbers have been trending downward over the past month.

"The nation is not yet at the next normal," the experts -- who include six members of the Biden transition team's covid advisory board, prominent researchers and former leaders of the CDC and the Occupational Safety and Health Administration -- wrote, warning against "complacency, inaction, or premature triumphalism" in the fight against the coronavirus.

The group consulted with the White House in January and February, and some of its recommendations are similar to those in a plan that President Joe Biden previewed in last week's State of the Union address. But the experts' proposal offers much more detail on how to combat the threat from the coronavirus and other infectious diseases, said Ezekiel Emanuel, a bioethicist at the University of Pennsylvania who coordinated the efforts.

For instance, while the White House urges additional research into long covid, the outside experts lay out nearly 20 discrete goals related to the illness, including calling on the Social Security Administration to ensure that people with long covid qualify for disability benefits; having the CDC create an official count of long covid cases; and setting up a long covid task force, led by the surgeon general or another senior official.

Emanuel also was critical of efforts to research long covid through the National Institutes of Health and the CDC, saying the federal government-backed studies were moving too slowly and were too small in scope.

"They need to be recruiting hundreds of thousands of people rapidly, and getting answers in months -- not years," Emanuel said.

White House officials said they valued the group's input but said they are consulting with multiple teams of experts, having solicited advice from approximately two dozen outside groups and other officials to develop the administration's plan.

The report was co-written by some of the most prominent national experts on covid, including Harvard University immunologist Kizzmekia Corbett, University of Washington computational virologist Trevor Bedford, Children's Hospital of Philadelphia pediatrician Paul Offit and Rick Bright of the Rockefeller Foundation. The 53 contributors also include former CDC director Julie Gerberding, senior leaders at the COVID Collaborative and multiple officials who served in senior roles in the Clinton, Bush and Obama administrations.

Their recommendations include numerous positions espoused by Biden administration officials, including investing in next-generation vaccines and therapeutics, moving faster to fight new variants and keeping schools open. They also call for new dashboards that would offer the public and policymakers information on when to consider imposing health restrictions such as mask-wearing.

Compared with the White House report, the outside experts' effort focused more on issues such as improving air quality, given evidence that poor indoor ventilation is linked to the spread of the coronavirus and other respiratory illnesses. Experts listed tactics that they said go further than the White House plan, such as requiring updated standards and building codes, publicly posting air-quality results for individual buildings, and providing subsidies to boost indoor air quality for low-income communities and households.

"The public does not understand the paramount importance of clean indoor air," David Michaels, a George Washington University professor who led OSHA during the Obama administration and helped write the report, said in an email. "A communications campaign from the White House and the agencies would motivate workers and residents to push building operators to clean the air."

The experts said fighting covid presents an opportunity to tackle other respiratory illnesses such as influenza, given the applicability of protections such as mask-wearing and that as many as 50,000 Americans may die in a bad flu season.

The group also launched a website, covidroadmap.org, detailing the tactics it recommends for "living with covid" and calling for a shift in focus to combat all respiratory viral illnesses.

They also proposed tactics to address problems that have persisted throughout the pandemic, such as vaccine hesitancy and lack of trust in government agencies.

For instance, the experts recommended overhauling the government's Vaccine Adverse Event Reporting System, saying that the self-reported data is unreliable and it has been exploited by anti-vaccine groups to spread misinformation.

They also detail strategies to increase support for embattled public agencies such as the CDC, arguing that the agency can "rebuild trust and credibility" through a "steady drumbeat" of evidence-based advice, convening an independent advisory council and adopting more transparency about how it sets guidance.

The report's recommendations are intended for audiences beyond the White House, said Vivian Riefberg, a University of Virginia professor who contributed to the plan, citing goals such as ensuring that health workers responding to the pandemic are supported with fully funded mental health services.

"[W]e hope other local and state governments as well as the private and nonprofit sectors will also take actions," Riefberg wrote in an email.

The experts said that a White House proposal for $22.5 billion in new funding for the domestic and global coronavirus response fell far short of the actual need. Emanuel called for $100 billion in additional covid funding across the next year, followed by about $15 billion per year.

Information for this article was contributed by Dan Diamond of The Washington Post and by David Rising of The Associated Press.