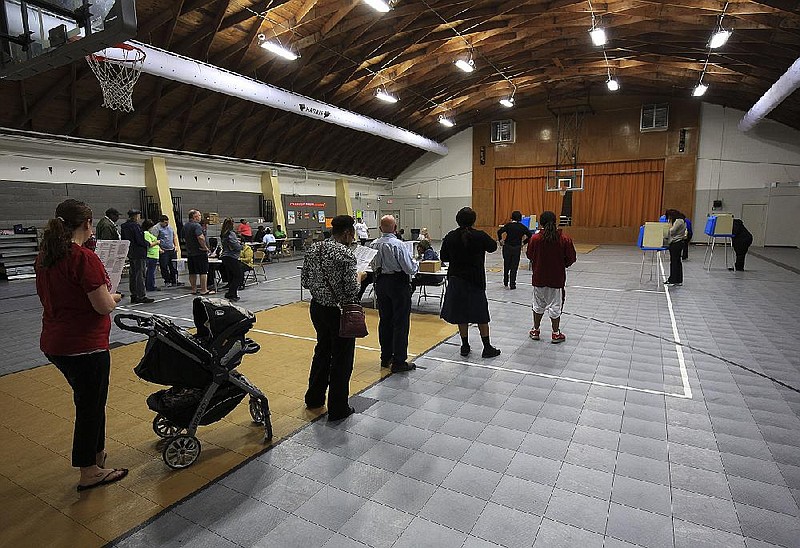 Voters wait for a voting booth in the gym at Harris Elementary School in North Little Rock in this Nov. 8, 2016, file photo. (Arkansas Democrat-Gazette/Staton Breidenthal)

Lead plaintiffs Arkansas United and the League of Women Voters of Arkansas argue that Pulaski County Circuit Judge Wendell Griffen should strike down the four laws as illegal.

Over the trial's first three days, the plaintiffs' attorneys brought nine witnesses that claimed the laws will disenfranchise voters that are poor, minorities, immigrants or dealing with chronic health problems.

The laws at issue are Act 249, involving voter identification; Act 728, regulating campaigning around the polls; Act 736, affecting how ballots are validated; and Act 973, which sets deadlines for mail-in absentee ballots.

Supporters of the Republican-sponsored laws say they strengthen Arkansas' election integrity and bolster public confidence in the system.

Daniel Shults, director of the state Board of Election Commissioners, said the board has not seen evidence of voter fraud. Shults was the first of two witnesses to be called by the defense, attorneys from Attorney General Leslie Rutledge's office, and he will continue his testimony today.

In response to questions from attorneys, Shults said it is in the board's interest to ensure that all willing and eligible voters in Arkansas are able to vote.

However, the four laws being challenged go against this interest, said Kenneth Mayer, a political science professor at the University of Wisconsin-Madison, who testified virtually for the plaintiffs' side Wednesday and Thursday.

"The challenged provisions place additional direct and indirect burdens on voters, and [they are] very likely and almost certain to decrease turnout and make it harder for individuals to vote in Arkansas," Mayer said.

For example, Act 249 eliminated an option for voters who can't immediately produce identification. Before, voters who couldn't provide IDs could instead give sworn statements to ensure their ballots were counted.

Voters are allowed to fill out provisional ballots and submit photocopies of their IDs by noon on the Monday after Election Day, but their votes will not be counted if they cannot do so. This can be difficult for the 13.8% of Arkansas households that do not have a computer, Mayer said.

When asked if he believed Act 249 would disenfranchise voters, he said, "My conclusion is that it will."

Mireya Reith, the founding executive director of the immigrant advocacy group Arkansas United, agreed with Act 249 is obstructive because some immigrants do not have the necessary access to technology.

Reith also spoke against Act 736, which standardizes the requirement that a voter's signature on an absentee ballot be verified by checking the person's voter registration application. Before, state law allowed election workers to check multiple signatures, and narrowing it down to one document could disproportionately affect Hispanic and Latino Arkansans, who often have multiple surnames, Reith said. They might have changed their names upon being naturalized, or they might sign their names differently in different circumstances, she said.

Act 736 says the signatures on the absentee ballots and voter registration forms must be similar, not that they must match.

"For what it's worth, they're the same word in Spanish," Reith said.

Several witnesses testified Tuesday that chronic health problems such as arthritis and neuropathy can make a voter's signature inconsistent and risk getting their ballots rejected under Act 736.

Susan Inman, a Pulaski County election commissioner, said she is not aware of any training or established standards for county clerks to compare signatures and ensure that eligible voters are not turned away from the polls.

Act 973 moved the mail-in ballot deadline forward from the Monday before an election day to the Friday before.

Reith said the weekend before an election is a valuable time for "low-propensity voters" to finalize their voting plans.

Griffen asked Shults if any county clerks complained about the Monday deadline, and Shults said they had not, to his knowledge.

Critics have drawn parallels between Act 728 and a Georgia law that specifically bans giving out food or drink to voters within 150 feet of a polling place, but supporters have said the law is intended to target loitering and would not prevent handing out refreshments to voters waiting in lines that sometimes last for hours.

Shults said he interprets Act 728 to mean someone can only enter the exclusion zone and hand refreshments to voters if they are on their way into the polling place.

"If they entered for that purpose alone [distributing refreshments] and then went right back out to where they started from, that does seem to be prohibited," Shults said.

State Sen. Kim Hammer, R-Benton, the Senate sponsor of the bills that became the four laws, presented the eventual Act 728 to a House committee in April 2021, and he mentioned handing out bottled water to voters as a behavior that the law would prohibit.

Shults and the defense attorneys repeatedly said they did not believe Act 728 would prevent voters from receiving water while in line to vote, and the plaintiffs' attorneys on Thursday played a video clip of Hammer's comments.

Reith said educating Arkansas United members about how the new laws affect them would take away time and resources from the organization's other advocacy efforts.

"It would be intensive work with our team to figure out how we can communicate this in layperson terms in multiple languages," she said.

The trial will continue today.