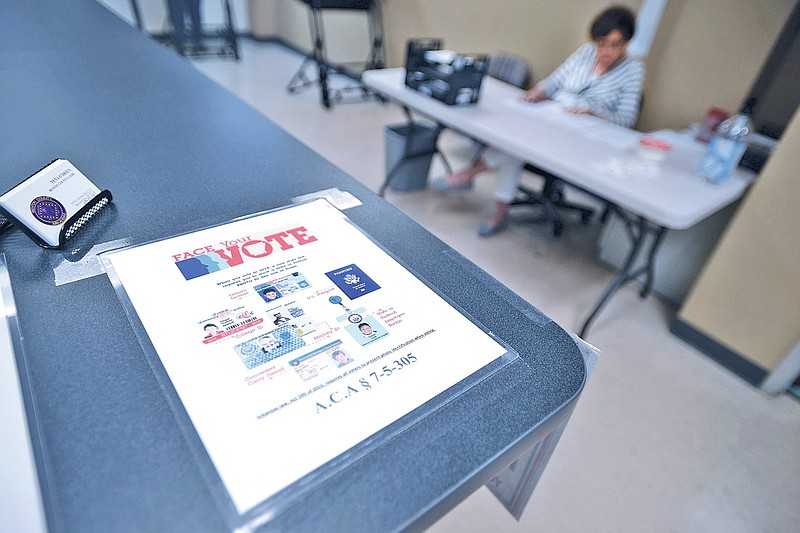 A voter identification reminder is taped to a counter at the Benton County Clerk's office in Bentonville in this May 2014 file photo. (NWA Democrat-Gazette file photo)

Throughout this week's trial, attorneys for those who challenged the laws -- Arkansas United, the League of Women Voters of Arkansas and five individuals -- brought nine witnesses that said the measures would disenfranchise voters that are poor, minorities, immigrants or dealing with chronic health problems.

In granting the permanent injunction, Griffen said Arkansas legislators' fears of voter fraud could not justify passing laws restricting voting without proof of conduct the laws were purportedly passed to address.

"In the judicial sphere you don't prove something is illegal just because you're afraid something might happen," Griffen said. "That's speculation."

Supporters of the Republican-sponsored laws say they strengthen Arkansas' election integrity and bolster public confidence in the system.

The four laws were enacted last year. They are:

• Act 728 prohibited people from standing within 100 feet of a polling site except to vote or for another lawful purpose. Critics have said the law would prohibit such activities as handing out water or snacks to voters standing in long lines waiting to vote.

• Act 736 introduced a requirement that a voter's signature on an absentee ballot be verified by checking the person's voter registration application. Before, state law allowed election workers to check multiple signatures. Earlier in the trial, several witnesses testified that the change could present obstacles for many Arkansans, particularly those with ailments like arthritis or nephropathy, which can make a voter's signature inconsistent.

• Act 973 moved the mail-in ballot deadline forward from the Monday before an election to the Friday before.

On Friday, Josh Bridges, an election systems analyst with the Arkansas secretary of state's office, testified that the mission of the office is to ensure that elections in Arkansas are "fair, free and accurate," and he said the 2020 election was just that.

"For Arkansas the 2020 election was successful," he said. "The votes that were tabulated were accurate."

Bridges said the office received a lot of calls and emails from people around the state who voiced concerns about the integrity of the election before the 2020 election.

"We battled a lot of misinformation that citizens had decided was the truth," he said. "We did the best we could to dispel any rumors that came our way."

He said some of the responses the office received in return were "not very nice."

At the conclusion of testimony, Brittany Edwards of the Arkansas attorney general's office said all of the laws being challenged were reasonable actions by the state to combat voter fraud and to ensure the integrity of elections.

"No one disputes voting is a fundamental right," she said, "but government is obligated to ensure free, safe and fair elections to protect the right to vote."

She argued that the burden placed on voters was minimal, meaning the court should use the rational basis test to determine if the burden is justified, rather than intermediate or strict scrutiny, what is known as the "Anderson-Burdick test," based on two U.S. Supreme Court rulings involving ballot access.

According to a Brennan Center for Voting Rights, the Anderson-Burdick balancing test establishes a sliding scale of judicial scrutiny that weighs the burdens that a state law imposes on electoral participation against the state's asserted interests or benefits. Named after the 1983 case of Anderson v. Celebrezze and the 1992 case of Burdick v. Takushi, the test holds that the greater the burden imposed, the greater the state interest must be to justify it.

"Under Anderson," Edwards said, "these laws regulate how to vote, not who can vote."

Regarding the change in the absentee ballot return deadline, the plaintiffs had failed to prove that Act 973 posed an undue burden to voters because, Edwards said, "while voting is a right ... absentee voting is not. It's a convenience."

She said the deadline change was warranted because of the increase of absentee voting in the 2020 election. She said the uptick created administrative headaches for election officials.

Anyone who misses the Friday deadline, she said, could simply come in on Monday and vote early.

Kevin Hamilton, closing for the plaintiffs, argued for strict scrutiny in assessing the claims put forth, saying that any statute that infringes on the right to vote must be held to that standard. He said that while voters may not have a right to water while waiting in line to vote, he said the right of free speech includes allowing support for voters standing in line "to exercise what is the most fundamental right we have."

Hamilton said statutes are already in place to prohibit campaign materials or solicitations within 100 feet of polling sites, making Act 728 an attempt to outlaw activities that are already illegal.

He rejected Edwards' interpretation of absentee voting as a convenience, saying that for some people suffering from disabilities or other issues it can be the only method that enables them to vote.

"That burden is not affected by any interest on the other side," he said.

Hamilton said there has never been an instance of anyone falsifying an affidavit to cast a provisional ballot. He said those lacking proper ID can get a voter ID from the county, but many cannot afford to take time off work or find transportation to their county clerk's office.

"It's not really free," he said. "For a voter struggling to put food on the table, it's a significant burden ... that falls upon those least able to afford it."

After the conclusion of all arguments, Griffen denied motions for a directed verdict in favor of the state, saying he was inclined to go with strict scrutiny on the issue "because the right of suffrage is a fundamental right."

"I've been listening in the past four days and I've read a whole lot of stuff," the judge said. "I haven't heard anybody say I saw electioneering. I've heard witnesses say we heard allegations, but we could not prove them and allegations cannot provide proof of compelling government interest."

Griffen said even Secretary of State John Thurston, who holds the ultimate responsibility for election integrity in the state, said: "The 2020 election was the most successful in Arkansas history."

"I find that each of the challenged measures violate the state constitution, and each will be permanently enjoined," Griffen said

Griffen said he will issue a written ruling sometime next week.

Regarding the ruling, Stephanie Sharp, a spokeswoman for Arkansas Attorney General Leslie Rutledge, said no decision has been made yet on a possible appeal.

"The attorney general is committed to fighting for the integrity of elections in the State of Arkansas," Sharp said. "She will review Judge Griffen's order and determine the next appropriate step."

Information for this article was contributed by Tess Vrbin of the Arkansas Democrat-Gazette.