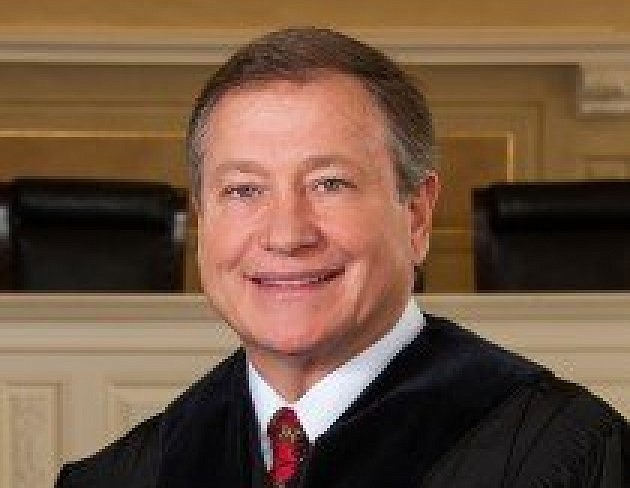 The legality of a campaign advertisement for Arkansas Supreme Court Justice Robin Wynne has been questioned because it was filmed in the courtroom.

Robert Gregory, a Conway resident, told the Arkansas Democrat-Gazette that he filed a complaint Monday with the Arkansas Judicial Discipline and Disability Commission accusing Wynne of violating state law with the advertisement.

Wynne, of Little Rock, has served as an associate justice in Position 2 since 2015.

The complaint, which Gregory shared with the Democrat-Gazette, states that the advertisement -- which Wynne shared on his Facebook account -- didn't contain a statement saying who had paid for it and depicted the justice wearing his robe and standing in the Arkansas Supreme Court courtroom.

Gregory said in an email to the Democrat-Gazette that he felt it's important that elected officials and candidates understand and abide by the laws and regulations.

"If the interested citizens do not complain when there are violations, then we do not have a 'fair' system," Gregory said. "To me this ad is a clear violation of the laws."

Gregory said he supports another candidate running against Wynne. Chris Carnahan, a Division 1 district judge for Faulkner and Van Buren counties, and attorney David Sterling are also vying for the Supreme Court seat held by Wynne.

The complaint cited Arkansas Code Annotated 7-1-103(7)(B)(1), which states that all articles, statements or communications appearing in any radio, television or any other electronic medium intended or calculated to influence the vote of any elector in any election and for the publication of which a consideration is paid or to be paid shall clearly contain the words "paid political advertisement" or "paid political ad"; or "paid for by," "sponsored by" or "furnished by" the true sponsor of the advertisement.

Gregory's complaint also states that he believes Wynne violated a judicial conduct law because he was campaigning while wearing his judicial robes and using court facilities, and that Wynne used his status and the trappings of his office to gain advantage in the election.

Wynne told the Democrat-Gazette that he had no knowledge of a complaint being filed and that the only public complaint he has seen about the ad came from state Rep. David Ray's Twitter account.

Graham Sloan, director of the Arkansas Ethics Commission, wouldn't confirm the existence of any complaint because by law the commission is required to keep pending matters confidential. He said all statutes under the commission's jurisdiction carry the same possible penalties.

"If a violation is found, the Commission can impose a fine ($50 to $3,500) or issue a public letter (caution/warning/reprimand)," Sloan said in an email.

The issue began making the rounds on social media after Ray, R-Maumelle, posted a message on Twitter about Wynne's ad being filmed in the state Supreme Court chambers.

Ray said he supports Carnahan in the race.

Ray said he noticed the ad March 7 on social media.

Ray said he thought at minimum that the ad was highly unethical.

"I know as a state representative, I am prohibited from filming a commercial from the floor of the House," he said. "I would never even think to do that. Why is this justice on the Supreme Court doing it?"

Ray said he watched the ad a few times and noticed it lacked a written disclaimer.

Wynne said he doesn't think he violated any law. He said the advertisement was filmed in the Supreme Court chamber, which is available to the public.

"If you read the statute, it makes it clear that I didn't violate anything since it is readily used by the public," Wynne said.

The advertisement was still on Wynne's Facebook page Friday, and he said he doesn't plan to remove it.

"In my opinion, it's legal and certainly the statute that was referred to meets the legal scrutiny," he said. "If you wanted to come to the Supreme Court courtroom and shoot video, you could if you wanted to do it."

Wynne said he doesn't feel the need to take to social media and defend himself because he feels he did nothing wrong.

"The courtroom is a public place," he said, "and the disclaimer on my Facebook page is a disclaimer."