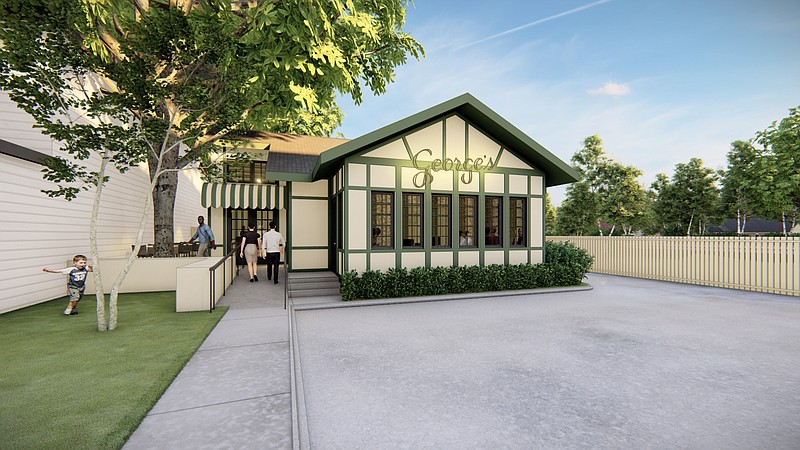 This is an artist's concept of what the exterior of George's on Kavanaugh Boulevard in Little Rock's Pulaski Heights will look like when it opens later in 2022. (Special to the Democrat-Gazette)

We've been reporting the advent of George's in the former Cafe Prego, 5510 Kavanaugh Blvd., Little Rock. Now it's official, and we have a few more details: a news release confirming that Little Rock natives Mary Olive and John Stephens expect to open what is described as "an exciting new neighborhood Italian restaurant in the Heights ... continuing the tradition of Italian cuisine" in "late 2022."

"George's was named as an homage to beloved restaurants of theirs during their time abroad that have inspired the restaurant's decor and atmosphere," the release explains. The menu will include "fresh, homemade Italian classics with a local spin"; there will be three dining rooms, a patio "and a hidden speakeasy bar" and the exterior "will blend into the fabric of the character-rich Heights neighborhood with respect to the original house's Tudor design."

A spokesman for the Fazoli's chain says he can't be more specific, but that the restaurant at 3701 Warden Road, North Little Rock, behind the Target in The Other Center, will open in "early to mid-April." However, a post on Facebook (tinyurl.com/2p8vfs6b) is more specific: "Look out, Arkansas! Fazoli's is headed your way on 4/12. Stop in and see us at 3701 Warden Road."

In the meanwhile, the restaurant is in the process of hiring up to 80 talented individuals to join its team ... full- and part-time team members for front of house, back of house and assistant manager positions. Interested candidates can apply by visiting Fazolis.jobs.

By the way, the news release about the hiring reveals the name of the restaurant's general manager — Dustin Utley — and that Fazoli's is one of the 17 FAT (Fresh. Authentic. Tasty.) Brands, which we brought to your attention the other week by noting plans to expand the reach of Fatburger & Buffalo's Express in Arkansas. Among the other FAT Brands with which you might be familiar: Round Table Pizza, Johnny Rockets, Twin Peaks, Great American Cookies and Ponderosa and Bonanza steakhouses.

And speaking of Fatburger & Buffalo's Express, one of our correspondents reports — though we have not yet confirmed — that the chain has bought the former Steak 'n Shake at 2215 Dave Ward Drive, Conway.

And speaking of Conway, a couple of helpful readers point out that the City of Colleges does in fact have a Raising Cane's, at 916 E. Oak St., and a Mighty Crab, at 2104 Harkrider St. We regret the omissions.

Allsopp & Chapple, 311 Main St., Little Rock, has a new executive chef — Anthony Quintana, who started Feb. 28, replacing Bonner Cameron. "Anthony is passionate about producing the finest cuisine in Little Rock," the business says in a statement. "His creativity and attention to detail will continue A&C's commitment to providing a first-class dining experience." Quintana, says co-owner Eric Carter, is currently putting together his first menu — "we do not yet have a launch date, but it should be sometime in April," he says; it will retain "some Allsopp & Chapple favorites in addition to chef's new creations." Louisiana native and Tulane University alumnus Quintana's credits include Petit & Keet, Raduno, HAM and Brood & Barley. "He met with us several times and blew us away with his skills, knowledge, creativity and attention to detail," Carter says. "His references couldn't speak more highly of him."

And speaking of Allsopp & Chapple, just as we were going to press last week, we got word that its $149-per-person, four-course April 14 wine dinner, pairing a menu by Quintana with selections from Napa, Calif., winery Rombauer Vineyards, had already sold out. But, demand being sufficiently high, the restaurant has added a second dinner the previous evening, April 13. Assuming there are still seats available, make reservations by calling (501) 902-4911 or visit tinyurl.com/2p8jd53k.

We can't yet pin down the opening date more firmly than "April," but Little Rock is set to acquire an outlet of Healthy James, a "health food" restaurant and store, in The Center at Ten shopping center, 12911 Cantrell Road, next door to Saffron Indian Cuisine. The menu offers smoothies, salads and wraps. The mini-chain has outlets in Kentucky, Tennessee, North Carolina and Indiana. Call (501) 313-4605; the website is healthyjames.com.

The Good News, which appears to be a coffee shop from the "now hiring" sign in the window, which includes the phrases "splitting beans," "coffee addicted" and "might fit the filter," is going into the former Ohia Poke storefront in the Promenade at Chenal, 17815 Chenal Parkway, Little Rock.

And speaking of coffee shops, there's a pending building permit for a $246,000 "refresh" of a Starbucks at Little Rock's Bill and Hillary Clinton National Airport. "It's for the pre-security location. The one on the concourse was renovated before the pandemic started," explains Shane Carter, the airport's director for public affairs & governmental relations.

And construction started Tuesday on a renovation at the Arby's at 5507 Olive St., Pine Bluff. There's a target completion date of April 6, construction and supply chain issues notwithstanding, says a spokeswoman for franchisee Flynn Restaurant Group LLC. The drive-thru will remain open during construction and the restaurant, as remodeled predecessors have done, is offering a during-construction "buy one classic roast beef sandwich, get one free" promotional deal. This is one of several Arby's renovations throughout the area through the end of 2022 that, according to a news release, "will leave each restaurant with a fresh, new and improved look and feel, featuring upgraded exteriors, new authentic textures, multi-colored wood materials, modern lighting and chalkboard graphics."