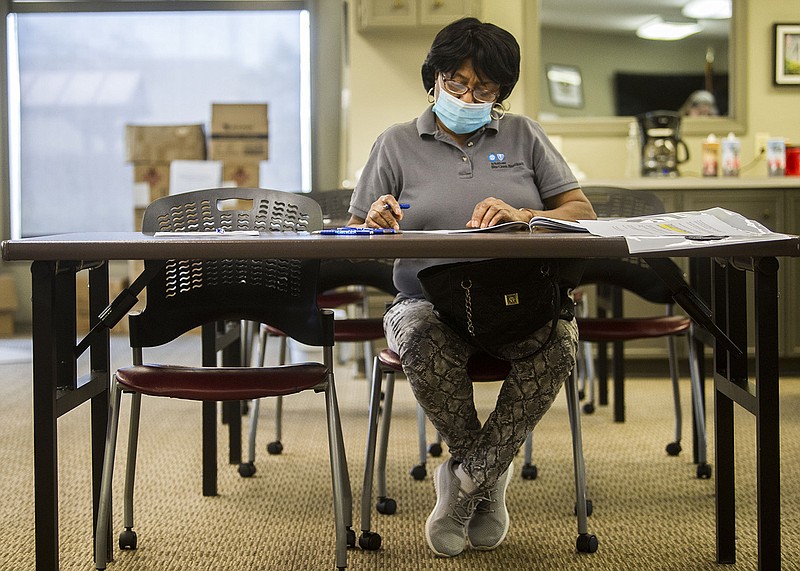 Sheryle Wheeler fills out paperwork during a job fair with CareLink at their offices in North Little Rock on Thursday, March 3, 2022. The event was CareLink's first job fair since the start of the pandemic. (Arkansas Democrat-Gazette/Stephen Swofford)

Unemployment continues to reach record lows in Arkansas, with state officials reporting Friday that joblessness dipped to 3.1% in February and remained significantly below the U.S. rate of 3.8%.

Unemployment in December was initially recorded at 3.1% but was revised upward to 3.3% with the release of new figures. Arkansas' civilian labor force last month rose 4,569, registering 5,028 more employed and 459 fewer unemployed Arkansans.

"It's another positive report," Michael Pakko, state economist with the Arkansas Economic Development Institute, said Friday. "The unemployment rate at 3.1% is a record low. We were one of nine states to have the lowest unemployment rate in the series history since 1976."

"The best news is that we have over 5,000 more Arkansans employed with over 4,500 net increase in the labor force," the governor said, noting the improvements from January to February. "This means that we are seeing more return to the workforce, and that is critical to meet the needs of our growing economy. We have seen growth in employment in almost all sectors, and with a record low 3.1% unemployment rate, we continue to be lower than the national unemployment rate."

Leisure and hospitality led the way, increasing by 2,700 jobs, followed by the government sector, which gained 1,900 jobs. Manufacturing added 1,000 workers from January to February. Losses were posted in information services; construction; and financial services, which dropped the most jobs, at 700.

Commerce Secretary Mike Preston also applauded the February report. "I was pleasantly surprised and expected it to hold steady or go up a little bit," Preston said Friday. "We went down, and the strongest thing out of that is 4,500 more people ended up in the labor pool. It's going in the right direction, it's just slow. I'm glad things aren't remaining stagnant."

While the labor pool, which indicates the number of Arkansans seeking jobs, improved from month to month, the number of those looking for work still remains well below that of two years ago, before the pandemic hurt the economy.

The state labor pool last month was 1.3 million, up more than 7,000 from the previous February but about 46,660 workers below pre-pandemic levels. Arkansas' labor force participation rate was 56.5% in February, below the 56.7% reported in February 2021 and down from 59.3% recorded in March 2020 at the start of the pandemic.

As the leisure and hospitality and manufacturing sectors showed strong gains in February from January, the two sectors also were leaders in year-over-year job gains, comparing last month to February 2021.

"We expected that in leisure and hospitality, since it was so negatively impacted during the pandemic, so it had room to grow," Preston said. "What was most impressive was the growth in manufacturing. It's been consistently going in the right direction. We just hope there's some staying power in these jobs as well."

Pakko noted that the leisure and hospitality sector is being lifted by improvements in retail sales. Retail trade added 4,000 jobs year-over-year while accommodation and food services added more than 9,000 jobs over the same period, from February 2021 to February this year.

"When you look at retail sales, it's looking up for employment, too," Pakko said Friday.

Last year, retail sales "soared in the spring, remained strong through mid-year, and ended with a fourth quarter surge," he wrote on his arkansaseconomist.com blog. "On an annual average basis, Arkansas retail sales rose 17.6% from 2020 to 2021, compared to an increase of 19.3% in the nationwide data."