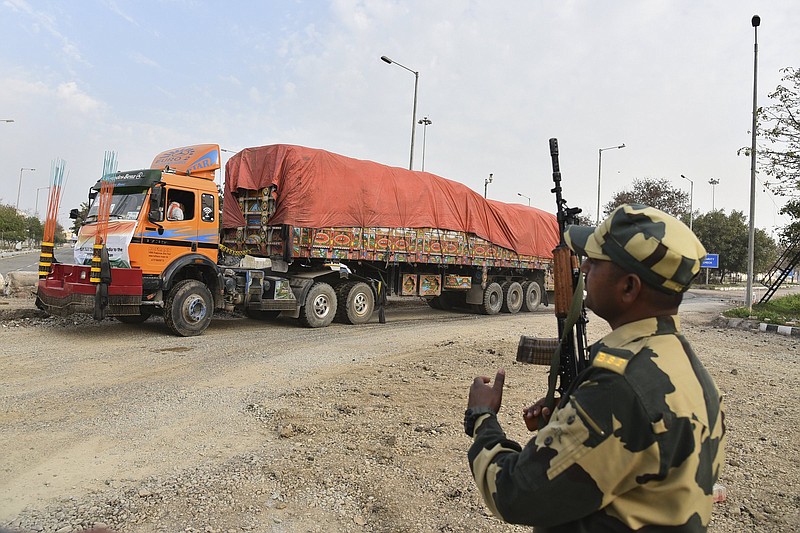 Worldwide, farmers like Kessel are weighing whether to change their planting patterns and grow more wheat this spring as the war has choked off or thrown into question grain supplies from a region known as "the breadbasket of the world."

Ukraine and Russia account for a third of global wheat and barley exports, which countries in the Middle East, Asia and Africa rely on to feed millions of people who subsist on subsidized bread and bargain noodles. They are also top exporters of other grains and sunflower seed oil used for cooking and food processing.

Kessel said he may plant some more wheat and ride the tide of high prices that have spiked by a third since the invasion, helping offset losses from drought and the increasing cost of fuel, but not a lot more.

Major grain producers like the United States, Canada, France, Australia and Argentina are being closely watched to see if they can quickly ramp up production to fill in the gaps from lost Ukrainian and Russian supplies. But farmers are facing the prospect of another year of drought, climbing fuel and fertilizer costs, and supply-chain disruptions from the covid-19 pandemic. Major producers also are hamstrung by factors like legal limits on exports and farming patterns.

That means uncertainty for countries like Egypt, Lebanon, Pakistan, Iran, Ethiopia and others that cannot grow enough wheat, barley, corn or other grains to meet their needs. The war has raised the specter of food shortages and political instability in countries that rely on affordable grain imports.

Any extra grain exports from anywhere in the world "will likely only partially offset lower Black Sea shipments over the remainder of the current season," the International Grains Council said in its March report.

About half of the grain the World Food Program buys to feed 125 million people worldwide comes from Ukraine. The double blow of rising food prices and depressed wheat exports from the war is a recipe for "catastrophe not just in Ukraine, but potentially globally," the head of the U.N. food assistance agency warned.

"It will impact millions and millions of people, particularly in the poorest countries of the world," WFP Executive Director David Beasley told The Associated Press in the western Ukrainian city of Lviv earlier this month as he visited a refugee center where food aid was distributed.

There are unanswered questions about how Western sanctions on Russia, the world's top wheat exporter, could affect its grain exports and distribution networks. Russia is also the biggest exporter of fertilizer, while Ukraine ships huge amounts of corn, rye, oats and millet. The Black Sea region is a top producer of the grains used to feed livestock worldwide.

Australia and India have responded with increased grain exports, but there's little room for others to immediately do the same. That's mainly due to recurrent drought, said Arnaud Petit, executive director of the International Grains Council.

The U.S. produced about 44 million tons of wheat for the 2021-2022 season. Just two to three years ago, it was over 50 million tons. Petit pointed to drought and farmers switching to more profitable crops.

Canada, Argentina and Australia could try to ramp up wheat production for the coming season that ends in mid-2023, but it's too early to tell if farmers are changing their planting patterns to focus more on grains like wheat.

Doug Martin said it's too late for his family farm in Manitoba, Canada, to make significant changes to what's being planted now. Plus, growing a range of crops spreads out risks.

"Most producers have a set idea of what they are seeding and will probably stick to that," Martin said.

Although higher wheat prices will reap earnings for farmers, that isn't enough incentive to expand production because prices are also climbing for crops like oats, canola and barely.

"There are other crops that are going to get good returns," Martin added.

Any increased production is running up against surging costs for supplies. The price of fuel has skyrocketed, and the cost of fertilizer was already high because of a crunch in natural gas acutely felt in Europe.

"With cheaper fertilizers, it could have been possible to grow our way out of a global food security problem -- possibly -- but nutrients are anything but affordable or even accessible right now," said Sylvain Charlebois, a professor in food distribution and policy at Dalhousie University in Canada.

Philippe Dutertre grows wheat in Chemire-le-Gaudin, in the Sarthe agricultural region about 130 miles southwest of Paris. He hasn't decided whether to expand his wheat patch given soaring energy and electricity costs.

"We might be able to act a little bit on the crop rotation, but today, France produces wheat, corn, rapeseed for oils and other cereals," he said. "We don't have the certainty anymore to say that we will be able to guarantee the food security of France and Europe tomorrow."

Australian farmers experienced a bountiful wheat season. Still, the agriculture department says Australia will not be able to respond to lower Ukrainian supplies right away because it's already sold its exports through September.

The situation is similar in Argentina, another major grain exporter. A whopping 95% of its current wheat crop has already been sold.

Jorge Josifovich owns farmland in Pergamino, one of the richest agricultural areas in Argentina, where he grows wheat, corn and soybeans. Despite higher wheat prices, he said Argentine farmers might not be motivated to plant more because of high fertilizer and fuel costs, coupled with "a rigorous price control imposed by the government that is unfavorable to producers who sell their production to exporters."

The calculus leaves the world's biggest wheat importers vulnerable, including Indonesia, Egypt, Pakistan and Bangladesh as well as war-torn Yemen and cash-strapped Lebanon. They are countries with huge populations in poverty, relying on affordable wheat for their diets.

Drought in the Middle East is at its highest level in at least 20 years, according to the Gro Drought Index, hindering any efforts to ramp up domestic wheat production.

There is potential for unrest if prices continue to rise, particularly in nations without sufficient stocks of wheat. They may be forced to wait to purchase it from the market, switch to rice or draw from their wheat reserves.

In Egypt, the world's biggest wheat importer, the government recently announced price caps for unsubsidized bread and fines for violators in response to soaring prices.

The world has 278 million tons of wheat stock to help buffer shortfalls from Ukraine, said Petit of the International Grains Council. Half of that stock, however, is in China, which holds more than a year's worth of supply to ensure food security for its 1.4 billion people.

Meanwhile, farmers a world away are making their own hard decisions. Tom Bernhardt, who operates a fifth-generation crop and cattle ranch near Linton in North Dakota, said no-till farmers like himself won't deviate too much from their normal rotation and plant more wheat because it can lead to problems with soil health and weeds.

Plus, there's no guarantee wheat prices will remain high.

"I have never planted additional acres just to chase a price," the the 61-year-old American farmer said.

Information for this article was contributed by Susie Blann, Oleg Cetinic, Almudena Calatrava and Rod McGuirk of the Associated Press.