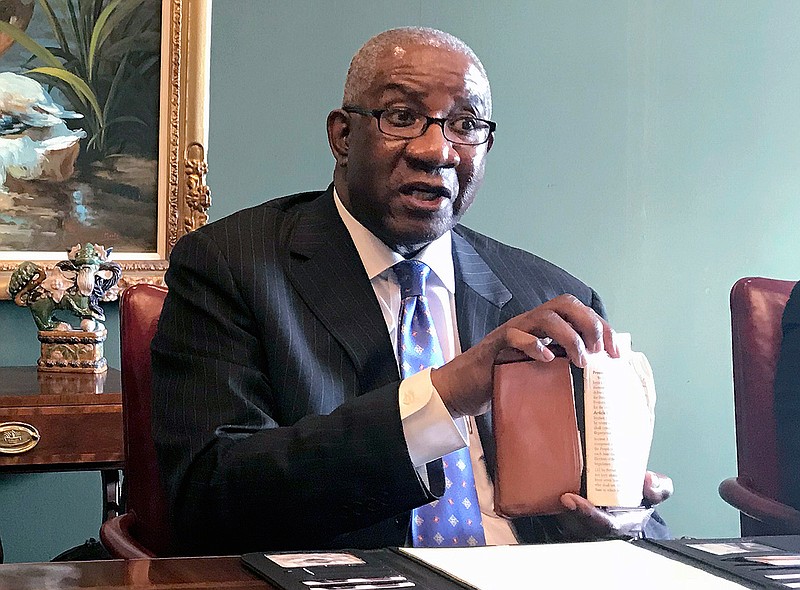 Four Arkansas voting laws will not take effect for the time being after a ruling Tuesday from Pulaski County Circuit Judge Wendell Griffen.

The League of Women Voters of Arkansas and immigrant advocacy group Arkansas United sued the state over four voting laws that the General Assembly passed in 2021.

Griffen struck down the election laws on March 18 as illegal, with attorneys representing the state asking that the laws be allowed to remain in effect as the state Supreme Court may weigh in. Griffen denied the request for a stay Tuesday, saying "none of the factors that must be satisfied in order to justify a stay has been established."

"Having heard four days of trial testimony from lay and expert witnesses, reviewed the documentary evidence, and analyzed the pertinent law, it would be absurd for the Court to conclude that Defendants are likely to succeed on the merits of their appeal in the face of the proof adduced at trial and the legal standard the Court was required to apply to it."

Supporters of the laws said they are necessary to strengthen voters' confidence in the election and improve the integrity of the system. The plaintiffs argued the laws make it harder for many -- especially minority group members and the poor -- to vote.

Arkansas Attorney General Leslie Rutledge said she would appeal Griffen's decision, where it could be finally decided by the state Supreme Court. So far the court has not received an appeal, according to a deputy clerk with the Supreme Court.

The four laws were part of a large slate of bills on elections the Republican-controlled state Legislature passed in 2021 as former President Donald Trump spread claims about voter fraud changing the outcome of the 2020 presidential election.

Act 728 limits people standing within 100 feet of the main entrance of a polling site. Act 249 requires voters who use provisional ballots to submit a photocopy of their ID by the Monday following the election.

The League of Women Voters and Arkansas United, joined by five other plantiffs in the lawsuit, argued the voting laws would restrict the ability of some Arkansans to use the ballot box.

"We are grateful the stay was denied and that in all likelihood the unconstitutional voter-suppression laws will not affect participation by voters in this year's elections," said Bonnie Miller, president of the League of Women Voters of Arkansas.

Rutledge sought a stay, arguing changing the rules now would complicate the fast-approaching May 24 primary.

"Judge Griffen -- once again -- entered an erroneous decision that does not prioritize the integrity of the quickly approaching election or Arkansans' fundamental right to vote," said Amanda Priest, a spokeswoman for Rutledge in a statement. "The Attorney General has already sought to appeal the injunction entered by Judge Griffen and will ask the Arkansas Supreme Court to stay the injunction pending resolution of the appeal."

The bills came as Republican-held legislatures passed a variety of laws aimed at combating voter fraud. Lawmakers argued the laws were a necessary correction to the state code which would reduce voter fraud and give Arkansans more confidence in election results.

In his decision Tuesday, Griffen said that sentiment was not something the defense could back up in court, writing "no evidence was presented that fraudulent voting occurs in Arkansas."

"However, the evidence presented during the trial of this lawsuit demonstrates that Acts 249, 728, 736, and 973 are based entirely on conjecture, speculation, surmise, misinformation, and fear-mongering about allegations of voter fraud and election insecurity," Griffen said.

Griffen issued a permanent injunction against the four laws in a decision on March 18, saying the defense failed to show the fears of widespread voter fraud were based on evidence.

"In the judicial sphere you don't prove something is illegal just because you're afraid something might happen," Griffen said. "That's speculation."