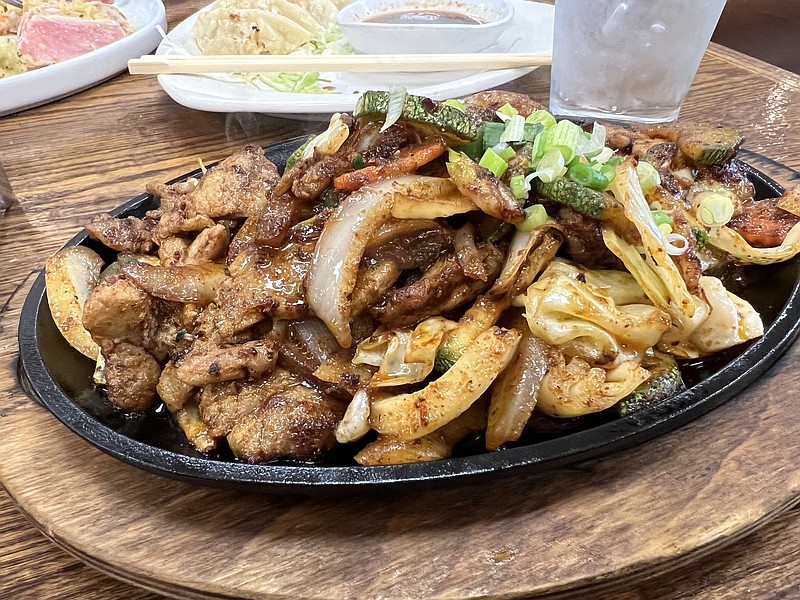 Marinated Pork, off the Korean Barbecue menu, came on a sizzling plate, not grilled tableside, as the menu promised, at Kiyen’s at Kamikaito on Main Street in North Little Rock’s Argenta District. (Arkansas Democrat-Gazette/Eric E. Harrison)

In case you missed it, Kemuri sushi, seafood, robata is adding a second, west Little Rock location to its Hillcrest headquarters, displacing Kiyen's Seafood Steak and Sushi from its spot off Chenal Parkway.

That has meant that Kiyen's owner-chef, Kiyen Kim, has had to relocate, which he has done, to his second location, Kamikaito, on Main Street in North Little Rock's Argenta District.

Kiyen's at Kamikaito has preserved most of Kamakaito's menu (including, as the sign posted in front of the entrance brags, 65 kinds of sushi rolls), while adding two pages to the menu of Korean entrees (including Bulgogi, Stone Bowl Bibimbap, Jamppong and Korean Chirashi), Korean barbecue and a selection of "Kiyen's Fusion Entrees."

A recent visit produced a mixed result — some worthwhile items, including a couple of the appetizers, and one entree worth recommending, but some significant disappointments as well.

Our visit, very early in the dinner cycle, meant that we had very little competition when it came to the kitchen's attention, so that may explain why our three appetizers, two entrees and a raft of side items all basically hit the table at once. Of course, part of the problem was that we over-ordered, but it was just too much food to cope with.

We can definitely recommend the Marinated Pork, billed as a seasonal dish (in what season, we wonder, would pork not be available?) off the Korean Barbecue menu: chunks of slightly chewy pork, some of which were a little larger than bite-sized, in what the menu describes as "Chef Kiyen's special blended marinade," grilled with onions, zucchini, cabbage, carrots and mild — we hope, we didn't actually bite into one — slices of a jalapeno-like pepper. The menu says it's supposed to be "Grilled Tableside," but it came out of the kitchen instead on a sizzling plate.

It was a nicely nuanced blend of spices, sweetness and maybe a bit of vinegar, but not so hot it either caused our palate to flare up or our nose to run (did we mention we avoided the peppers?). It's $25 for just the barbecue plate; for another $5 we got a combo that included miso soup and salad (except we didn't get a salad), steamed rice and "various Korean side dishes," which included thin, crisp sheets of nori (seaweed), two different preparations of marinated bean sprouts, broccoli in a spicy sriracha-like sauce, lightly garlicky zucchini and some mild kimchi.

One of the other best things on the table: the Honey Crispy Shrimp appetizer ($10), which we had previously enjoyed as a mid-pandemic takeout item. The nine medium-sized shrimp were lightly battered and fried crisp in a slightly spicy honey-based sauce, plus a small bowl of a spicy-sweet aioli.

And we'd order the Shumai (five for $7) again, plump shrimp dumplings that were supposed to be pan-fried but weren't (the menu also specified we were supposed to choose between "original" or "wasabi," but we weren't offered that option, either), with a tiny cup of garlic-soy dipping sauce that did accent the dumplings but which we felt we could do just as well without.

We were mildly disappointed, or at least not impressed, by the Gyoza Pan appetizer ($7, we chose pork over vegetable), a half-dozen potsticker dumplings lightly pan seared on one side, which were a little chewier than we would have liked and came with a more than ample cup of slightly reddish, slightly spicy dipping sauce.

The evening's biggest non-success was the Seared Tuna ($23.50), one of the Kiyen's Fusion Entrees, a comparatively small amount of sliced ahi tuna very lightly seared and topped with some mild chopped garlic that did nothing to enhance the flavor, of which there was very little. Nor did we find that and "Kiyen's Specially Blended Dipping Sauce" was much help.

It occupied a small portion of a large plate, overwhelmed by the seasonal salad, vast pile of bland tempura vegetables and unusually spiced Kiyen's fried rice. Intrepid Companion, who, based on Kamikaito's former seared tuna offering, which came flanked by sliced avocado, was looking forward to this dish but was considerably disappointed. She also found that the seasonal salad, which she got twice — once on the platter and once as a substitute for the miso soup in which she expressed a disinterest — wasn't composed of mostly iceberg lettuce, which would have been more suitable for the rather watery ginger dressing, but of mixed greens with a few cherry tomatoes. (The menu mentions a $3.50 "House Soup," described as "a clear onion broth with mushrooms, crab, green onions and tempura flakes, but apparently that's not available any more.)

Service — aside from having the entire order hit us at once — was quite good, and our server, rather than refill our water glasses, brought us a water bottle from which we could pour ourselves at need.