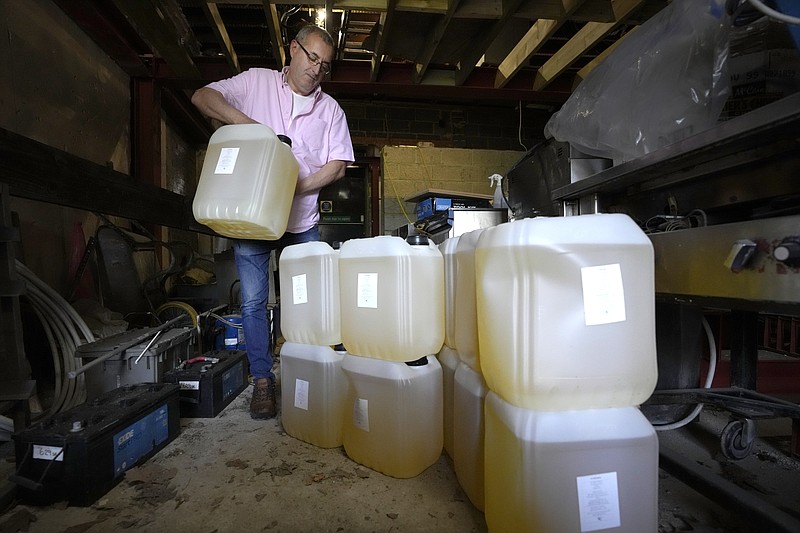 Harry Niazi carries a container of sunflower oil out of storage at Olley's Fish Experience in Herne Hill in London, Thursday, April 21, 2022. Global cooking oil prices have been rising since the COVID-19 pandemic began and Russia's war in Ukraine has sent costs spiralling. It is the latest fallout to the global food supply from the war, with Ukraine and Russia the world’s top exporters of sunflower oil. And it's another rising cost pinching households and businesses as inflation soars. (AP Photo/Kirsty Wigglesworth)

ISTANBUL -- For months, Istanbul restaurant Tarihi Balikca tried to absorb the surging cost of the sunflower oil its cooks use to fry fish, squid and mussels.

But in early April, with oil prices nearly four times higher than they were in 2019, the restaurant finally raised its prices. Now, even some longtime customers look at the menu and walk away.

"We resisted. We said, 'Let's wait a bit, maybe the market will improve, maybe (prices) will stabilize. But we saw that there is no improvement," said Mahsun Aktas, a waiter and cook at the restaurant. "The customer cannot afford it."

Global cooking oil prices have been rising since the covid-19 pandemic began for multiple reasons, from poor harvests in South America to virus-related labor shortages and steadily increasing demand from the biofuel industry. The war in Ukraine -- which supplies nearly half of the world's sunflower oil, on top of the 25% from Russia -- has interrupted shipments and sent cooking oil prices spiraling.

It is the latest fallout to the global food supply from Russia's war, and another rising cost pinching households and businesses as inflation soars. The conflict has further fueled already high food and energy costs, hitting the poorest people hardest.

The food supply is particularly at risk as the war has disrupted crucial grain shipments from Ukraine and Russia and worsened a global fertilizer crunch that will mean costlier, less abundant food. The loss of affordable supplies of wheat, barley and other grains raises the prospect of food shortages and political instability in Middle Eastern, African and some Asian countries where millions rely on subsidized bread and cheap noodles.

Vegetable oil prices hit a record high in February, then increased another 23% in March, according to the U.N. Food and Agriculture Organization. Soybean oil, which sold for $765 per metric ton in 2019, was averaging $1,957 per metric ton in March, the World Bank said. Palm oil prices were up 200% and are set to go even higher after Indonesia, one of the world's top producers, bans cooking oil exports starting Thursday to protect domestic supply.

Some supermarkets in Turkey have imposed limits on the amount of vegetable oil households can purchase after concerns about shortages sparked panic-buying. Some stores in Spain, Italy and the United Kingdom also have set limits. German shoppers are posting photos on social media of empty shelves where sunflower and canola oil usually sit. In a recent tweet, Kenya's main power company warned that thieves are draining toxic fluid from electrical transformers and reselling it as cooking oil.

"We will just have to boil everything now, the days of the frying pan are gone," said Glaudina Nyoni, scanning prices in a supermarket in Harare, Zimbabwe, where vegetable oil costs have almost doubled since the outbreak of the war. A 2-liter bottle now costs up to $9.

Emiwati, who runs a food stall in Jakarta, Indonesia, said she needs 24 liters of cooking oil each day. She makes nasi kapau, traditional mixed rice that she serves with dishes like deep-fried spiced beef jerky. Since January, she's had trouble ensuring that supply, and what she does buy is much more expensive. Profits are down, but she fears losing customers if she raises prices.

"I am sad," said Emiwati, who only uses one name. "We accept the price of cooking oil increasing, but we cannot increase the price of the foods we sell."

The high cost of cooking oil is partly behind recent protests in Jakarta. Indonesia has imposed price caps on palm oil at home and will ban exports, creating a new squeeze worldwide. Palm oil has been sought as an alternative for sunflower oil and is used in many products, from cookies to cosmetics.

The Associated Press has documented human rights abuses in an industry whose environmental effects have been decried for years.

Across the world in London, Yawar Khan, who owns Akash Tandoori restaurant, said a 20-liter drum of cooking oil cost him $28 a few months ago; it's now $49.

"We cannot pass all the price (rises) to the consumer, that will cause a catastrophe, too," said Khan, who also struggles with rising costs for meat, spices, energy and labor.

Big companies are feeling the pain, too. London-based Unilever -- maker of Dove soap and Hellmann's mayonnaise -- said it has contracts for critical ingredients like palm oil for the first half of the year. But it warned investors that its costs could rise significantly in the second half.

Cargill, a global food giant that makes vegetable oils, said its customers are changing formulas and experimenting with different kinds of oils at a higher rate than usual. That can be tricky because oils have different properties; olive oil burns at a lower temperature than sunflower oil, for example, while palm oil is more viscous.

Farmers may be hesitant to plant enough crops to make up for shortfalls from Ukraine or Russia because they don't know when the war might end, said Steve Mathews, co-head of research at Gro Intelligence, an agriculture data and analytics company.

"If there were a cease-fire or something like that, we would see prices decline in the short run for sure," he said.

Longer term, the crisis may lead countries to reconsider biofuel mandates, which dictate the amount of vegetable oils that must be blended with fuel in a bid to reduce emissions and energy imports. In the U.S., for example, 42% of soybean oil goes toward biofuel production, Glauber said. Indonesia recently delayed a plan to require 40% palm oil-based biodiesel, while the European Commission said it would support member states that choose to reduce their biofuel mandates.

In the meantime, consumers and businesses are struggling.

Harry Niazi, who owns The Famous Olley's Fish Experience in London, says he used to pay around $29 for a 20-liter jug of sunflower oil; the cost recently jumped to $55. Niazi goes through as many as eight jugs per week.

But what worries him even more than rising prices is the thought of running out of sunflower oil altogether. He's thinking of selling his truck and using the cash to stock up on oil.

"It's very, very scary, and I don't know how the fish and chips industry is going to cope. I really don't," he said.

So far, Niazi has held off on raising prices because he doesn't want to lose customers.

At Jordan's Grab n' Go, a small Dyersburg, Tenn., restaurant known for its fried cheeseburgers, owner Christine Coronado also agonized about price increases. But with costs up 20% across the board -- and cooking oil prices nearly tripling since she opened in 2018 -- she finally hiked prices in April.

"You hate to raise prices on people, but it's just that costs are so much higher than they were a couple of years ago," she said. 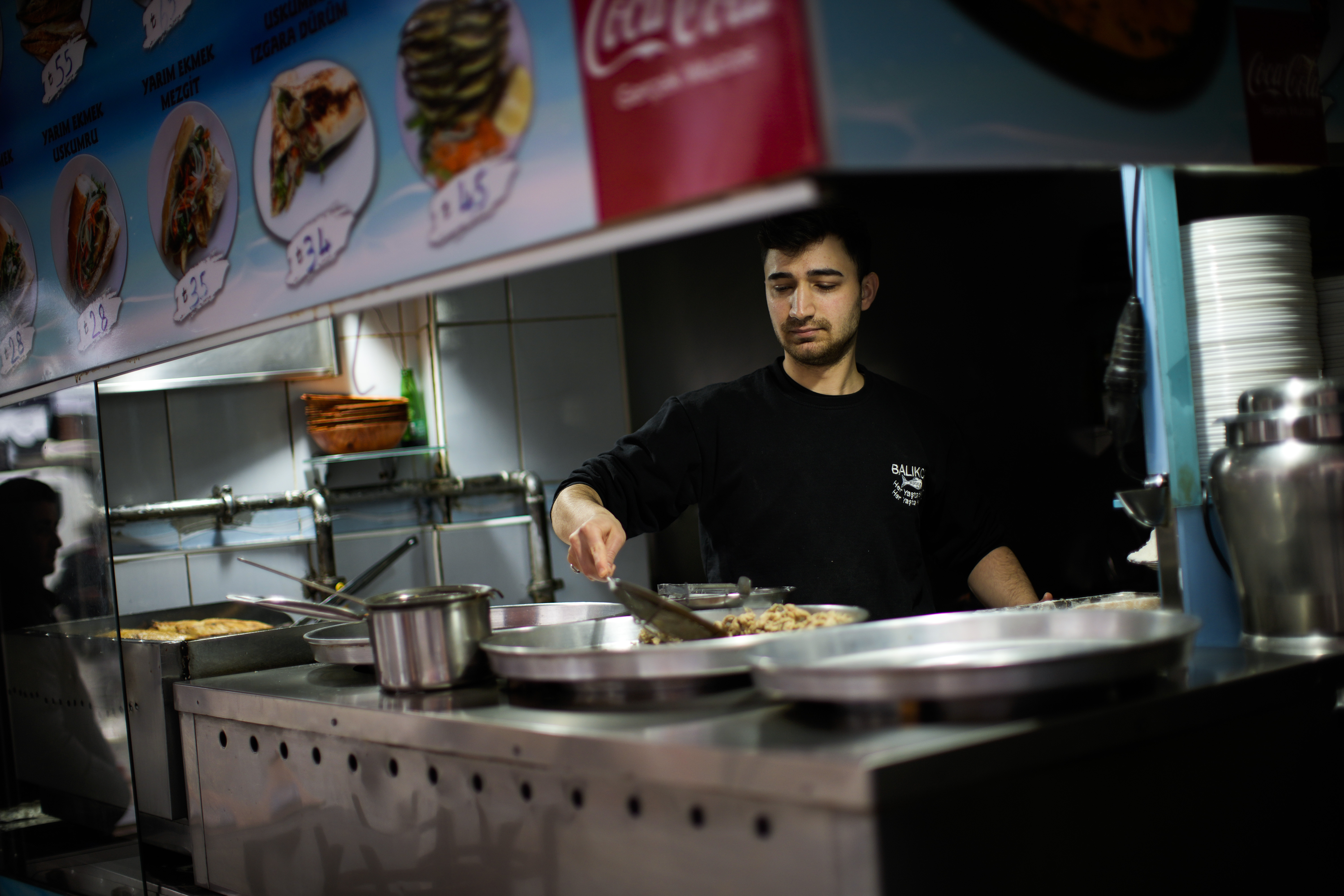 A worker fries seafood in a little local fish restaurant in a Besiktas neighborhood in Istanbul, Turkey, Tuesday, April 19, 2022. Global cooking oil prices have been rising since the COVID-19 pandemic began and Russia's war in Ukraine has sent costs spiralling. It is the latest fallout to the global food supply from the war, with Ukraine and Russia the world’s top exporters of sunflower oil. And it's another rising cost pinching households and businesses as inflation soars. (AP Photo/Francisco Seco)