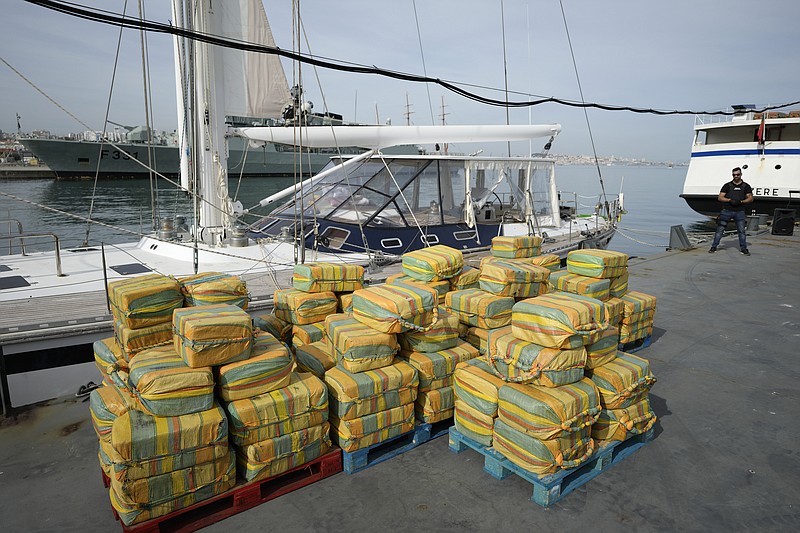 FILE - Bales of cocaine weighting some 5,2 tons and a seized yacht are displayed for the media at a Portuguese Navy base in Almada, south of Lisbon, on Oct. 18, 2021. Records amounts of cocaine are being seized in Europe while manufacturing of the banned stimulant drug is now taking place inside the the European Union, officials in charge of fighting and monitoring drugs use in the bloc warned on Friday, May 6, 2022. (AP Photo/Armando Franca)

BRUSSELS -- Records amounts of cocaine are being seized in Europe while manufacturing of the drug is now taking place inside the the European Union, officials in charge of fighting and monitoring drugs use in the bloc warned on Friday.

More than 214 tons of cocaine were seized in Europe in 2020, a 6% increase from the previous year. Experts from the European Monitoring Center for Drugs and Drug Addiction believe that amount could reach 300 tons in 2022.

With a market retail value estimated at $11 billion in 2020 and about 3.5 million European citizens reporting having used it in the past year, cocaine is the second-most used drug in the EU after cannabis. Its availability in Europe has never been higher, with extremely high purity and low prices.

While most cocaine manufacturing still occurs in Colombia, Peru and Bolivia, EU experts are worried by the processing now taking place inside the 27-nation bloc, particularly in Belgium, Spain and the Netherlands. Between 2018 and 2020, 45 illicit production laboratories were discovered in the EU.

Speaking at a news conference in Brussels, Laurent Laniel, a scientific analyst at the European Monitoring Center for Drugs and Drug Addiction, said that cocaine powder is often smuggled from South America to Europe in carrier materials such as charcoal and plastics, then extracted in local laboratories.

Alexis Goosdeel, director of the European Monitoring Center, said the availability on the continent of large amounts of cocaine base and paste increases the risk of seeing new forms of highly addictive crack emerging on European markets.

The expansion of the cocaine market also saw a rise in violence and corruption in the EU, with competition between traffickers leading to a rise in homicides and intimidation.

"Violence nowadays is a key feature for criminal organizations to make sure that they are the strongest in their business area," De Bolle said. "The violence has also a direct impact on citizens on the streets because we see people dying on the streets in the European Union."

EU experts also looked at the growing methamphetamine market, which has been spreading in recent years after being initially concentrated in the Czech Republic and Slovakia. In 2020, a total of 215 methamphetamine laboratories were dismantled in the region, according to reports from nine EU countries.

According to Europol, the EU agency for law enforcement, European manufacturers of synthetic drugs are working in cahoots with Mexican cartels to increase production.

"We see a clear link, Europe-Mexico," said Europol's executive director, Catherine De Bolle. "Mexican people, drugs criminals from the cartels are active on the European soil. Chemists from Mexico come to the European Union because they are specialized in the production and in the use of methamphetamine. So we see that they are active in the labs."

Meanwhile, Swiss police say an investigation is underway after workers at a Nespresso warehouse in western Switzerland found over 1,100 pounds of cocaine, with a street value of $50 million, as they unloaded coffee beans that had arrived by train.

Regional police in Fribourg said late Thursday they were alerted Monday by the company to the discovery at the facility in Romont and immediately set up a "broad security perimeter" around it with a large deployment of officers. Customs and border control agents were called in.

Early indications were that the shipment turned up in five containers that had arrived by sea from Brazil before being transferred onto a train, authorities said.

"The cocaine seized has an 80% degree of purity and its market value is estimated at more than 50 million francs," the police said, adding that the stash appeared "destined for the European market."

Switzerland is not an EU member but is part of the Schengen zone that allows for visa-free travel among many European countries.

Swiss food and drinks giant Nestle, which owns Nespresso, sought to reassure customers that "all our products are safe to consume."

"We have strict quality controls in place for green coffee arriving at our warehouses right up to the finished product," the Vevey, Switzerland-based company said in a statement emailed to The Associated Press. "The substance in question did not come into contact with any of our products or production equipment used to make our products."

Nestle said it could not provide more details because of the ongoing police investigation.

Information for this article was contributed by Samuel Petrequin and staff members of The Associated Press. 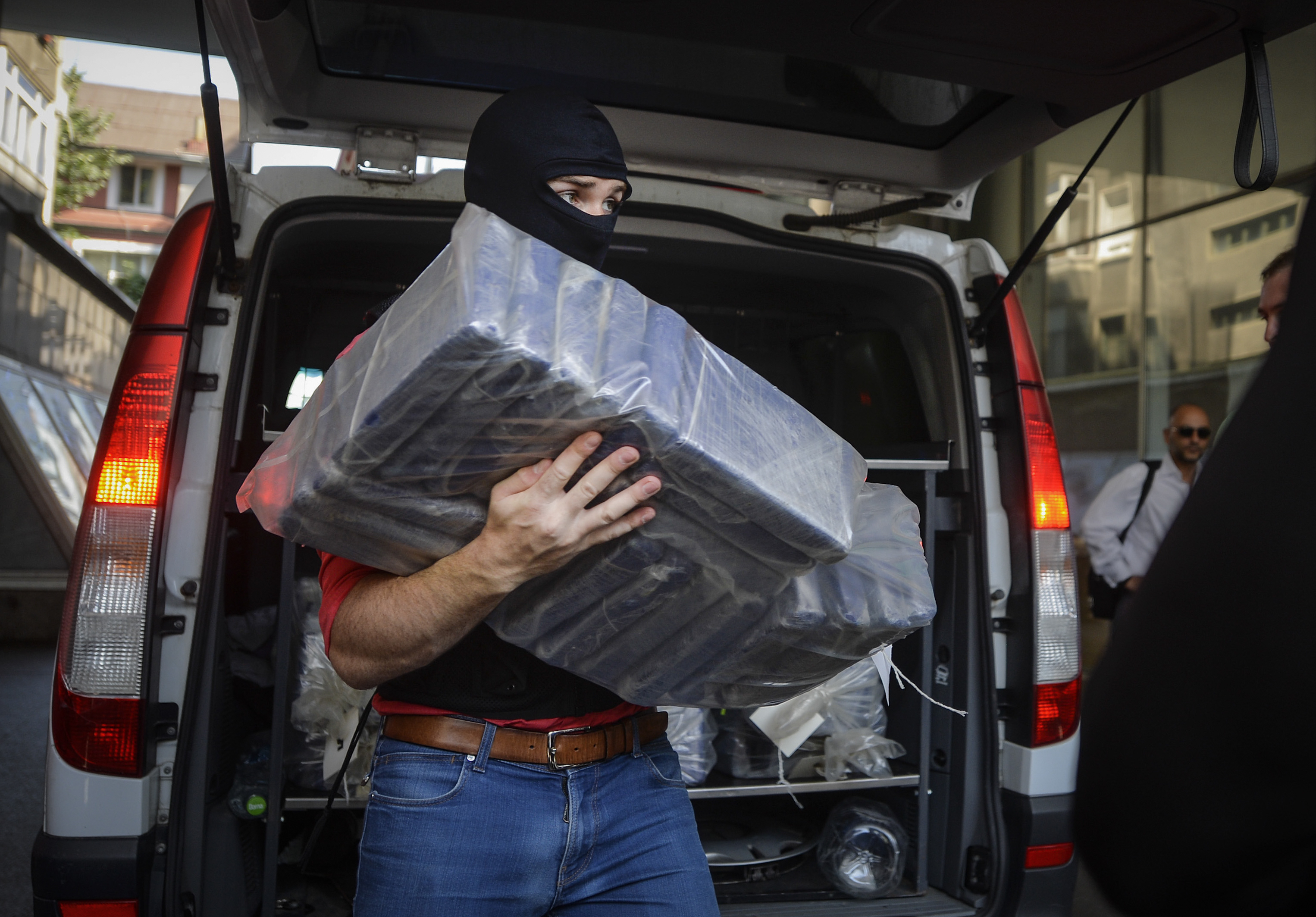 FILE - A masked policeman carries packs of cocaine, at the organized crime prosecutor' office in Bucharest, Romania, on July 1, 2016. Records amounts of cocaine are being seized in Europe while manufacturing of the banned stimulant drug is now taking place inside the the European Union, officials in charge of fighting and monitoring drugs use in the bloc warned on Friday, May 6, 2022. (AP Photo/Andreea Alexandru)